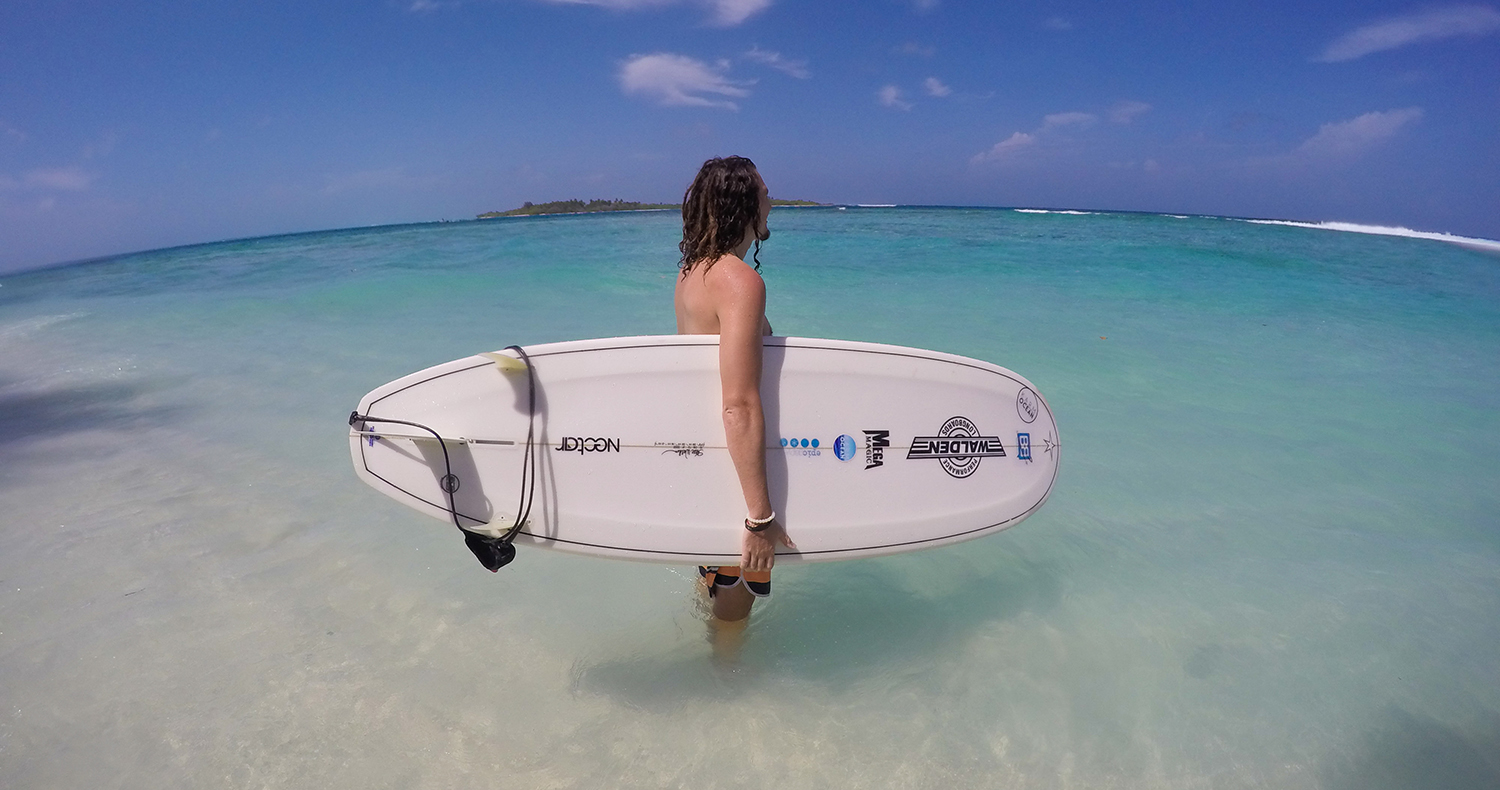 I was living in Byron Bay, with a solid pay cheque, surf on my doorstep and an Australia sponsorship. So why did I just chuck it all in to live out of a backpack again?!

Yup you read that title correctly. I’ve just quit a $57,500 a year job in Byron Bay to pack my life into a backpack again and go back to living in hostels and guest houses!

Anyone who has read my blog for a while might be having a bit of de-ja-vu about this posts as it’s pretty similar to the time I took a job as the Head of Marketing for a surf travel company.

It took me about 4 weeks to quit that job, book a plane ticket (well a few actually) and jet off on the next adventure – which included South Africa, Thailand, The Philippines, Bali, New Zealand and Australia.

Two years after that happened I landed a job as the Digital Manager for a travel company in Australia.

It was based in Byron Bay (one of my all time favourite places), came with the biggest pay cheque I’ve ever had and even got me sponsored into Australia on a 4 year visa – which ultimately leads to permanent residency and citizenship.

On paper it was my ideal setup.

Surf on my doorstep, dollar in my pocket and I got to settle down in Australia.

Despite making some pretty solid bank it quickly became apparent that I was much happier with less money. Sure I’ve eaten out at some nice places, rented a pretty awesome house and had some cash to buy some fun gadgets and surfboards – but ultimately none of that made me as happy.

Because none of that bought me time.

And time is the most precious thing you can have – because you can never buy anymore of it.

In the end the sacrifice of 38 hours of my life per week in a job I wasn’t too happy in wasn’t worth the trade. None of those 0’s on my bank balance are worth sacrificing my time.

I found myself burning out trying to juggle my own personal projects after a day of work, neglecting relationships, friendships and battling late nights to stay on top of everything I wanted to be working on.

Which is never a good place to be.

[Tweet “”time is the most precious thing you can have – because you can never buy anymore of it.””]

Paradise Isn’t Paradise If You Can’t Enjoy It

And that sacrifice in time brings me to the point that although I was based in Byron Bay, I couldn’t enjoy it as much as I should’ve.

Sure I had evenings and weekends – but with such limited free time I felt the compulsion to cram my free time with activities.

It’s the ultimate trap that the 9-5 is designed for – enough free time to feel like you’re not completely rotting away at work but limited enough that you feel compelled to fill every free moment spending your hard earned cash on activities and things to feel fulfilled.

This is especially true now it’s winter (yes Australia has a winter too!) and it gets dark at like 5pm.

I can’t enjoy ‘paradise’ if it’s dark 15mins after I finish work. I’m an outside guy and I love walks on the beach and exploring.

My time to do those things for half of the year here are limited to the weekend.

The biggest single issue was the fact that my setup in Byron, despite sounding rather awesome, was making me go stir crazy.

I’ve been spending the last 8 months in an office style environment, with no window, for 38 hours per week. Don’t get me wrong the people were pretty cool, but I was staring at a blank wall for most of the day.

Now that’s enough to make anyone go a bit mental, but for someone used to having control over their daily routine, location and work pattern that’s a recipe destined to cause some issues!

[Tweet “”although I was based in Byron Bay, I couldn’t enjoy it as much as I should’ve.””]

Missing Out On Waves

The worse thing about that is the fact I’m missing out on the waves. Now this is going to sound pretty ridiculous to anyone that doesn’t surf – but it’s a huge thing for me.

I’m used to jumping on planes, chasing swell and being able to delay my own work to grab some waves. But despite working for a travel company, that mindset still isn’t acceptable – even if it would improve my productivity!

So yes, part of the reason for quitting is so I can surf more. Because ultimately surfing makes me heaps happy and is one of my major loves in life.

[Tweet “”So yes, part of the reason for quitting is so I can surf more””]

At the end of the day I’m a travel blogger – and I love creating stuff. Whether that’s writing posts, shooting pics or editing videos, this is something I feel is valuable and the process of creating content is something I really enjoy.

Because if you love what you do, it never feels like work.

Sure that passion might not generate as much income (the financial security of being a travel blogger is far from certain!) but I’d much rather be life rich, cash poor and still enjoying life.

The last few weeks on my East Coast Australia Tour I had a blast – mingling with new people, shooting heaps of video, chatting about travel, exploring and being creative. It gave me a huge boost in energy and excitement and reignited my passion again.

I also listened through the recent podcast I did with Ignite Your Legend – and I decided that I wasn’t really taking my own advice at the moment. It was like the whole thing was me trying to tell myself I needed to change things.

You need to listen to your gut – it’s the best indicator in life and I know it’s cliche to say it but you really should trust it.

Mine was telling me that I need to take the leap, I need to keep creating, I need to continue building my own thing (such as my new site RTWBackpackers.com) and I need the freedom.

I’m a firm believer in the fact that when you want something bad enough life will rustle up some opportunities to help you – you just need to recognise them and take them, because then it dominoes into more options.

After some huge changes in my personal life (something I really don’t want to talk about on here) I was already in the mindset that I needed a fresh start and to bounce somewhere away from the Bay.

When my buddy mentioned he had to leave his house lease because the landlord was renovating the property I realised it could be the way out of my flat lease. He got an epic pad to live in and I got rid of one of the huge anchors tying me to Byron – everyone won.

A few days later Tourism Queensland invited me on a press trip (check out the video I put together below!) and said I could re route the flight to take me to Indonesia.

Suddenly I had no ties and a free flight to some of the best surf in the world.

Not only that but I also received a message from my good buddy from Thailand Echo saying she was heading to Bali to run a yoga and surf retreat and what was I up to.

By complete coincidence it turned out my flights put me in Bali the day before it all kicked off – so she offered me a deal in exchange for creating some video content and running some surf lessons.

And shortly after this I received an email from the crew of Tru Travels inviting me along on their 10 day Bali adventure to create some video and promote their Bali adventure on social media – beginning 3 days after Echos yoga retreat finished.

Boom – the first 3 weeks of my next adventure sorted, a few new creative projects and the chance to find some head space with some yoga and meditation as well as explore some more of Bali.

Life really did line up everything I needed to start my fresh chapter!

Although I love small town beach vibes, sometimes a small community feel can go slightly wrong – and without going into too much detail I had a whole heap of personal stuff happen which turned one of my favourite aspects into something I loathed.

In a spot like Byron everyone seems to know your business and want to get involved and you really cant escape bumping into a lot of people.

By the time I left Byron I felt like it had become a poisonous place for me – I hated the people, the bubble, the small town mentality and pretty much everything I once liked about it became a negative.

I couldn’t get out of there fast enough.

Now some people might view this as running away from my problems – but honestly being in Byron became the problem and by removing myself from it I left a lot of big issues behind and buried, which gave me the head space to deal with it all and relax.

Sometimes you just need to know when to cut your loses and bail out!

Don’t get me wrong – if you’re travelling Byron Bay is an epic spot to chill out and enjoy, but if you decide to live there just be aware of how trapped you can get in the Byron Bubble without even realising it.

Not paying attention to how sucked in I got was certainly a huge mistake on my part.

And all of the above is true in regards to the Aboriginal views on the land surrounding Byron Bay too (it’s know as Arakwal Country) – it is regarded as a place of spiritual healing, where no one really lived permanently. You came in, healed, gave birth or performed ceremonies and then left.

Might sound a bit hippie to a lot of people but the effects of overstaying is something I’ve felt in some way or another with a lot of my long term stints in the Bay.

Bring On The Haters!

Yes I know some of you are probably reading this and think I’m being ridiculous and throwing away a huge opportunity. But right now, under these circumstances, that opportunity is not the best decision for me and what I want to achieve.

And I know there are probably going to be some people trolling me in the comments.

But hey – it’s my life and I’m determined to live it on my terms.

Sometimes you have to take the risk, put your money where your mouth is and chase your dream.

Because if you don’t build your own dream someone else will hire you to build theirs – and that’s not how I plan on spending my life.

So here’s to the next adventure…wherever it may lead!

[Tweet “”put your money where your mouth is and chase your dream.””]