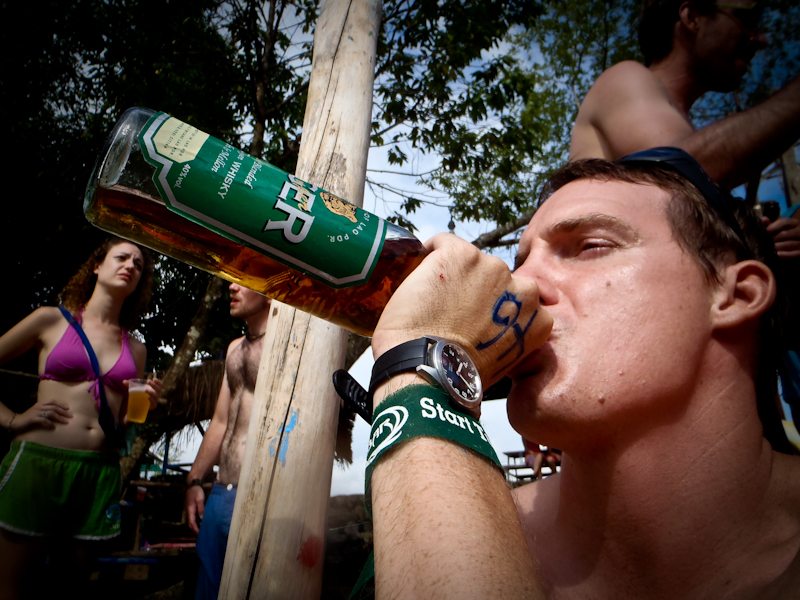 I’m currently sat on a cramped sleeping bus in Laos and I couldn’t be more happy – because it’s taking me far far away (right to the southern tip of the country to be precise) from the backpacking cess pit commonly known as Vang Vieng!

I arrived in VV a few days ago with rather high expectations. All along the backpacker trail people talk of this party town and the infamous tubing experience it houses. For those of you out of the loop tubing is best summed up as a pub crawl on a rubber ring!

Hundreds of travellers descend on this small town to party hard and it’s many people’s main destination within Laos, it’s arguably what Laos has become most famous for here days.

We got into town rather later than expected and rendezvoused with a couple of buddies from Lubang and checked into a rather nice guesthouse with air con.
All game for a catch up drink and having steered clear of bars for the last few days we headed into town to see where the night would take us.

The first thing that struck me was the sheer amount of absolutely blind drunk people stumbling around at 8pm!

It soon became clear why, as pretty much every bar was offering free buckets before 10pm, needless to say the hoardes of gap yah students took this opportunity to scull down as many troughs of cheap whiskey as they could.

Now I’m all game for a good night of drinking carnage, but I know my limits and I can control myself. The same cannot be said for the majority of people in VV though and within 10minutes of entering the “Bucket Bar” we’d witnessed a guy smashing bottles everywhere closely followed by the bar staff taking him out with a bat!

Grimy dubstep filled the air, which was already thick with the smell of vomit and whiskey and at the 11pm kick out time we hit Limbo Bar – where some bar owner had had the genius idea of mixing aforementioned drunken backpackers with a fire limbo contest!

Needless to say there were a few accidents!

To top all this off Matt got his drink spiked and after we all carried him home I spent the night listening to him chunder his guts out whilst periodically checking he wasn’t dead! He’d been chatting to a girl for the evening and we’ve come to be conclusion that she was the target. Bad times all round!

The next day I left him to recover in our air con fridge box of a room and spent the day nursing my own hangover at a restaurant playing a seemingly endless supply of Friends.

As I looked around – and over the next few days – I witnessed many people with what can only be described as the “Vang Vieng Stare”.

They look empty, soulless and lost.

For me that morning set the tone for VV – a town where backpackers loose sight of the beauty of travel and indulge to needless excess.

It seems that a mix of backpackers, tourism, opportunism and lack of control have transformed VV into a modern day sin city. A city where weed, magic mushrooms and opium are sold on restaurant menus and can also come premixed in a “disco bucket”.

If the chaos of Magaluf had a sordid love child with the dark underbelly of Columbia, Vang Vieng would surely be it!

VV sucks people in and traps them. The bar staff are the walking dead, caught up in the allure of the party. Like emaciated skeletons they trawl the streets – either hungover, drunk or in a daze. Either walking around lost of half unconscious watching endless re runs of family guy or how I met your mother.
They are however outnumbered by the zombie masses of travellers arriving everyday. And the type of backpackers that feast at a banquet this twisted are the ones you hope you never have to communicate with.

Those kind of people.

Yet VV is a nestled in some of the most beautiful scenery I’ve come across. The jungle covered mountains and cliff faces remind me of the trek to Machu Pichu. It’s stunning.
But poorly controlled tourism and excess has ruined what must have been – until very recently – a tranquil and amazing town.

There are still some nice sides to VV – like the Blue Lagoons, rock climbing or heading out into the surrounding countryside by motorbike, they are all slightly marred by the shadow the city is clouded in though.

By all means head to VV and spend a day tubing (it was actually a pretty fun experience) but a day is enough. I had to stay longer than I wanted too whilst Matt recovered and a little piece of my soul died there.
I became very aware of how much of an impact backpackers can have on a place and how many of my fellow backpackers simply don’t care enough about the culture, history or beauty of the countries they visit to try and preserve it.

There’s a time, place and limit on partying on the road. I love a good party, but I’d never let that side of my travels impact on the vibe of a place or take control of my experience.

Have you been to Vang Vieng or somewhere similar that made you question the impact of tourism by backpackers?