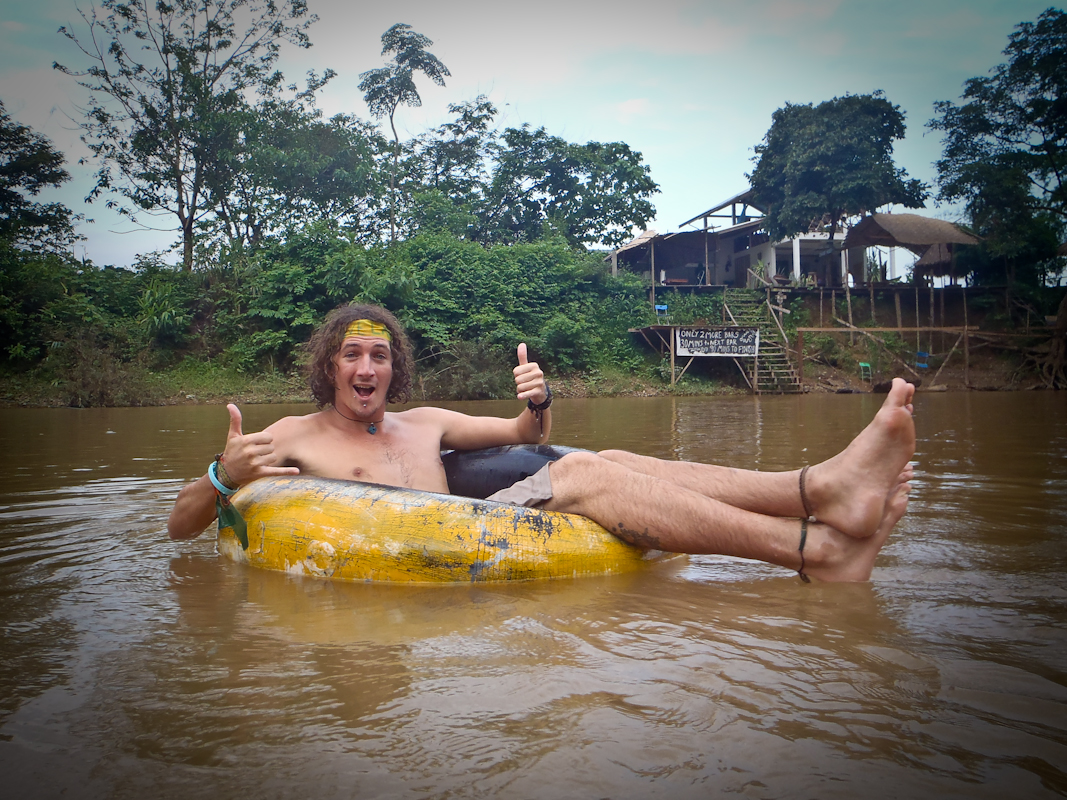 Tubing in Vang Vieng – A Fun But Dangerous Way to Drink?!

I arrived into the town of Vang Vieng for pretty much one reason, and one reason only. I’d followed the drunken backpacking masses to this once sleepy part of the world to indulge in an infamous day of tubing chaos.

Even though Vang Vieng turned out to be a soulless town of backpacker excess tubing was actually pretty good fun – so I thought it deserved a post of its own rather than being grouped into my negativity.

For those of you that aren’t aware about tubing, it has fast become the activity of choice in Laos – drawing in backpackers by the thousand with promise of fun times, cool waters and heaps of alcohol fuelled mayhem.

Tubing – in short – is a pub crawl on a rubber ring!

But this isn’t any old Uni pub crawl. This is a pub crawl down the Mekong river. A pub crawl where bars litter the riverbanks and walking is kept to a minimum. It’s also quickly gaining  reputation for being hideously dangerous – with 2 drownings over the last few weeks alone.

And once you’ve done it you can easily see why.

Nothing Is Better Than Free

Backpackers love freebies, and backpackers love booze, mixing these two is bound to draw them in and tubing has it by the bucketload – quite literally!

The first bar of the day is actually done via boat and from it you get a view down the river of drunken backpackers, rope swings and a scattering of bars. On entry you are given a wristband and a free shot. Sounds good right?

Not when said shot tips possibly the most vile and disgusting whiskey know to man – Lao Lao whiskey, a 40% bottle of liquid carnage which is actually cheaper than a bottle of water, at the steep charge of 80p a litre!

I grimaced as the liquor hit my throat, gasped a little and then headed into the bar to wash away the taste with a cold beer!

As you float down the first stretch of river the sound of pumping bass ripples through the tranquil surroundings and you see a rope hurling towards you, you pull yourself in a hey presto – bar number one!

The bars are crammed with backpackers of all shapes, sizes, nationalities and levels of drunkeness. The music is blarring and everyone is sinking drinks left right and centre. My drinking wingman for this particular excursion was the lovely Meabh – Irish by birth but Aussie by passport – so I knew I was in good hands drink wise!

Matt was still recovering after being spiked a few days before and m and Meabh were both slightly worse for wear dealing with hangovers and the fact she managed to fall through a bridge the night before!

Still – beers were sunk and dancing was done, and the cold river water was a welcome refreshment from the searing midday sun.

Once you’re bored of a particular bar you simply grab your tube, jump back in the water and repeat…simples!

However much fun tubing is it is definitely fraught with danger though!

Anyone with a scrap of common sense knows that booze and free flowing water don’t mix too well, hence us pacing ourselves.

Other backpackers though had simply got caught up in a messy spiral of Vang Vieng chaos and were doing keg stands, slamming through games of beer pong and quickly filling their arms up with free shot bands.

So it’s no wonder that people get injured during the revelry.

2 people had already died in the few weeks before I arrived here. But to be honest they were messing with magic mushroom shakes whilst floating down a river and drowned – so I have little sympathy for them.

It’s the rope swings that litter the banks that are the lurking danger though, especially at the tail end of dry season.

Multiple spinal injuries, whip lash, unconciousness…it’s all happened here. I witnessed some dude accidentally canon ball onto his friends head from about 20 foot up – he was lucky to walk away.

That said though if you’re reasonably sensible the whole experience is a damn good giggle.

Possibly the best part of the whole thing for me was drifting down the final few kms after the bars – which featured as my photo of the week.

Slightly intoxicated, with a good group of people gathered along the way downstream you all raft up, get the banter flowing, finish off some cold ones and take in the gorgeous scenery that surrounds you as the sun sets – just try to get back before dark!

The clash of nature and drunken backpackers is always a good way to put things into perspective and it’s the perfect way to let your alcohol levels drop slightly before a night out Vang Vieng style.

As much as I hate the town itself and how tourism has destroyed it I actually enjoyed tubing heaps. It’s all about moderation though people!

It’s definitely worth a 2 night stopover in VV to experience it, just don’t get caught in the chaos as Laos has heaps better things to offer further down south…!