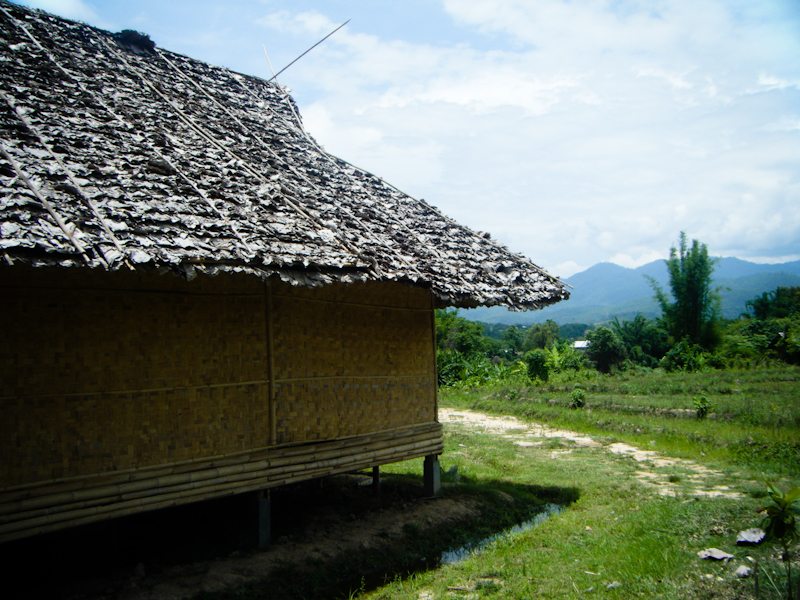 THAT Night In Spicy Pai When Sh*t Hit The Fan!

There are certain instances that in hindsight are bloody hilarious, they’re usually unforeseen and in the backpacking world they can quickly become a recited anecdote that makes a proportion of your trip.

There are also certain things you expect from a hostel – like a good nights sleep and service with a smile.

Not a hard thing to ask for is it?!

When I checked into Spicy Pai Hostel I expected my stay to mirror the latter statement, as I’ve previously published a glowing guest post review from fellow blogger Tom Hibbert and had heard heaps of good things about the place.

Unfortunately for me my experience was to be tarnished by a now rather notorious incident!

After a fun night of drinking along with most of the hostel we all stumbled back around 4am, crawling into our tree house style beds and trying to get some sleep before another lazy day exploring this lush town.

Half drowsy I was suddenly awoken by heaps of shouting. In true ignorance is bliss style I ignored it and put head back to pillow.

Next I hear my buddy Matt stumbled out of bed sounding rather annoyed. It turned out the shouting was coming from the hostel receptionist – who by all accounts wasn’t quite sober (and of the non alcoholic variety also) – and was verbally laying into 2 backpackers.

Matt isn’t one to stand by and let things slide so he promptly told the lady to be quiet, as he’d after all paid for a nights sleep and didn’t appreciate the way the situation was being handled.

…apparently not though as the next thing I heard was an almighty crash, the lady in question had hurled an ornament at him and taken out a moped!

Shit was getting loose!

Unsurprisingly Matt retreated to his bed and tried to lay low but unfortunately for him the trouble now moved to our dorm – with a now banshee like screaming receptionist intent on some kind of revenge!

As she stumbled around the dorm screaming in Thai looking for him she flung back mozzie nets and uncovered my other buddy Rory. Mistakenly thinking he was Matt she lamped him in the side of the head…whilst he was in bed with a girl he’d met!

Surprised, drunk and half naked Rory wasnt best pleased and made it very vocally apparent as he jumped out of bed.

It was at this point that I decided to jump out of bed and try to calm things down as half the dorm was now involved – trying to calm down the lady who was now trying to thump both Rory and Matt and also remove a rather angry Rory from the situation.

Standing between them all I took a battering from this tiny Thai lady who was not letting up in the slightest, and was pretty bloody strong!

By this point the other hostel staff were doing their best to diffuse the situation as well, but to be honest nothing anyone was doing would make her see sense and the whole dorm was now trying to figure out the easiest route to get back to sleep as she started throwing bags out the window and telling everyone to leave the hostel!

Things started to reach a calmer conclusion when our Aussie buddy Harriet stepped in and talked her down, but when someone in the dorm jokingly shouted “has the crazy bitch finally gone?!” sh*t hit the fan once again and Harriet took a full right hook to the face!

Bad times all round!

It was at this point that I stepped in again – literally dragging Harriet out of the room as we both brandished the visible bruises of a night in the line of fire.

I walked her back to her hostel and left the carnage behind, which apprently despite everyones best efforts took a while to die down.

Time to Check Out

Needless to say half of the hostel bailed as the sun rose – myself included!

There’s absolutely no excuse for anyone to act like that at anytime of the day, no a matter what they’re intoxicated on. Let alone a hostel worker at stupid o’clock in the morning.

I didn’t save my hard earned cash to pay for a sleepless night in a hostel where one member of staff shows such levels of unprofessionalism, complete lack of self restraint, is highly intoxicated and alienates such a large number of backpackers in one go.

It’s a massive shame as Spicy Pai was a beautiful and unique hostel that I enjoyed up until that point and I’d happily stay there again – but as long as that lady is working there I’d advise you to steer well clear as we later leant in town that rather a lot of people had been warned about her behaviour before visiting Pai.

Still, in hindsight the whole thing is bloody hilarious and a good travel story. Its a shame it came at the expense of a heaps of bruises, scratches and good nights sleep!