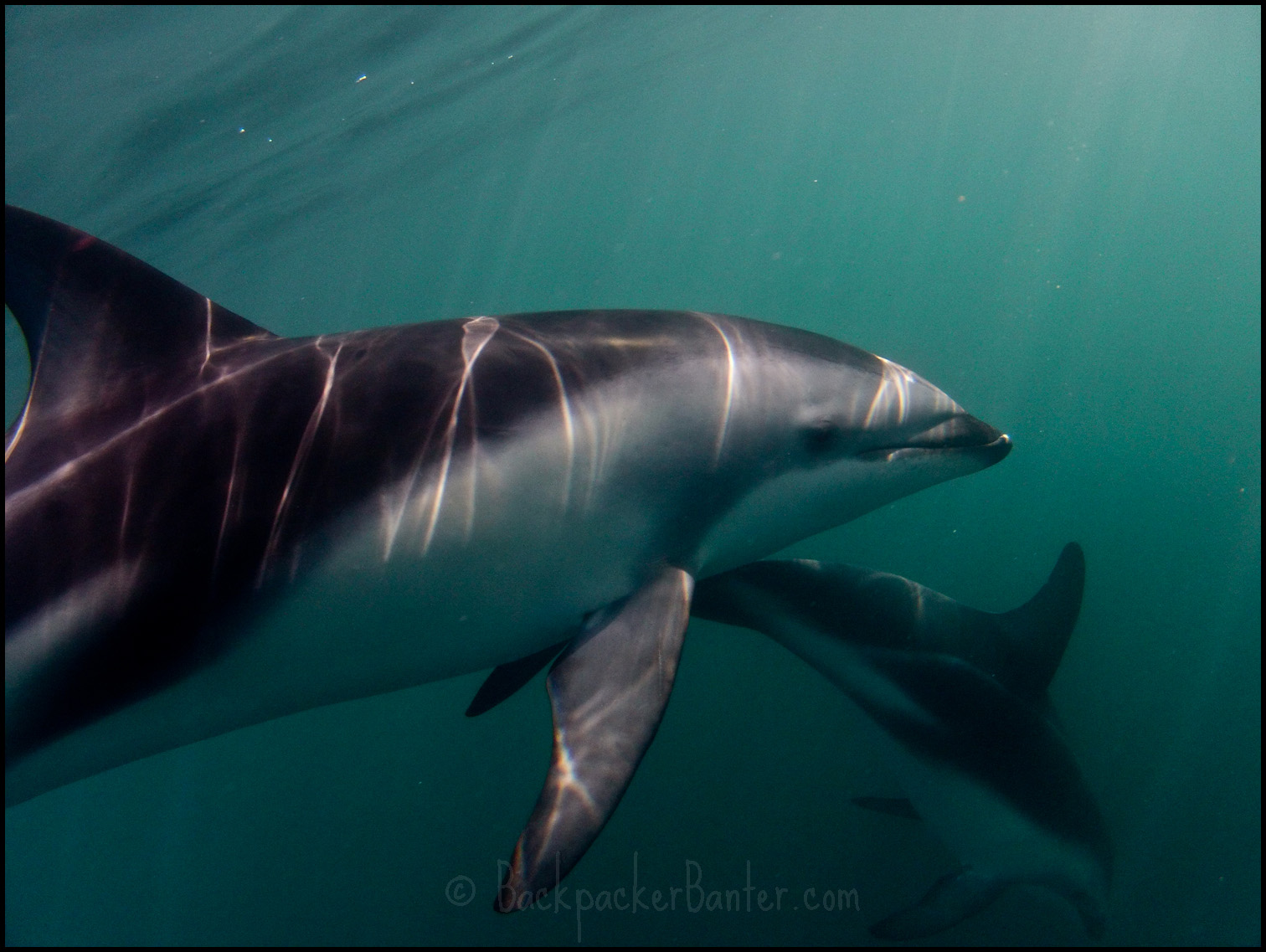 When it came to things to do in New Zealand swimming with in Dolphins in Kaikours with Dolphin Encounter was easily one of my highlights…here’s why!

Out of my whole time in the south island of New Zealand there are two experiences that really stand out – both of which I shall be posting about this week.

Swimming with dolphins in Kaikoura.

Not My First Encounter

Having travelled the world and being a surfer I’ve had a fair few encounters with dolphins – from them popping up in the lineup in Byron Bay, Australia through to them popping up on a boat crossing in the Galapagos Islands – they’re awesome creatures.

My mum was stoked to go on a dolphin watching boat (she literally used that phrase too which had me laughing heaps!) so we booked one in for Kaikoura – which is renowned on the backpacker trail as THE place to to see whales and dolphins.

Personally pre trip I was pretty dubious – maybe expecting to be on a boat for a few hours and see a dozen or so at best. Yet from the word go I realised that I was in for a treat.

Dolphin Encounter Kaikoura were slick from the off – with a beautiful new visitors centre and a great attention to detail.

After checking in I was directed through to the wetsuit room to get suited and booted for my day in the water. Considering there were 32 swimmers being kitted up the whole thing was fast and efficient and I soon found myself decked in nearly 10mm of rubber, including a hood – personally I thought it was a bit excessive (given the fact I only use 5mm when surfing in December in the UK!) but I was glad of it when I was in the water later!

Safety briefing done and everyone loaded onto the two mini buses we headed done to the wharf to board our vessels for the day – two smart looking boats with a good sized dive deck and adequate seating.

Luckily for us we were the 3rd trip of the day (by law they’re only allowed to run 3 trips per day) so the skipper knew exactly where he was heading to find the pod. 15 mins later and the first dorsal fins appeared and excitement on board was beginning to rise! Kitted out on the dive deck with the swimmers we were unable to see just how many dolphins were in the area…until the captain announced it.

Now I was expecting a couple dozen at best – which would allow us to swim pretty close and then I’d move on board the boat to hopefully get a few pics from above water.

The captain estimated the pod at around 500 dolphins.

At first I thought he was messing around until we cruised past the pod and at least 30 dolphins started tailing the boat, jumping around and then suddenly more and more find filled the waves.

Stoked doesn’t even begin to explain how I was feeling at this point! I hadn’t even slid into the water and I already knew this was going to be a far more magical experience than I could’ve hoped for!

When the horn blast signaling our entry into the water went off there was a slight hesitation – there were ALOT of big ocean dwellers off our boat and no one was quite sure what they’d let themselves in for! Luckily these nerves soon went away once I was emerged in the water – dolphins shot past, spun around and came up to explore who the hell I was, not from a distance though – they were literally a foot or so away at times!

The crew had given us a few tips on how to interact with them  so I gave it a go – luckily GoPro in hand to capture some images!

Looking into their eyes I started following the circling actions of a dolphin underneath me.

It soon became apparent that he wanted to test my snorkelling skills and began to twist and turn…me frantically kicking in an effort to keep up the pace! After a couple minutes he slowed down, came straight up to my face and then slowly began to swim alongside me – joined by a few of his buddies who had decided to join in too.

I suddenly found myself swimming along with an escort of nearly 10 fully grown dusky dolphins who would swim in front of me, lock eyes and then swim around in a flurry of water, whistles and clicks.

I was blown away by it all!

But this was merely the first encounter of the trip!

The horn sounded for us to rejoin the boat and the excited chatter on the dive deck summed up the fact everyone was as stoked as me! Even my parents on the bow of the boat were lit up with beaming smiles as dolphins performed backflips and belly slaps as they rode the boats bow wave.

This scene was repeated 5 times over the course of an hour water time – each swimming session more and more dolphins joining us and playing games with the snorkelers….and it never got boring for either party involved!

Clambering out of the water for the final time – arms like jelly, tired but utterly enthralled – we were handed a hot water hose, biscuits and hot chocolate whilst quickly shedding our rubber in favour for a jumper!

We then joined the spectators on the top deck for a good half an hour crusing along side the pod – cameras snapping away as they showed off and entertained us!

I could quickly see that even the non swimmers had an amazing time – the dolphins had no fear of the boat and were swarming around it in their masses – keen to show off their swimming skills and aerial abilities for as long as we wanted to stick around!

I was so glad I’d packed my SLR and zoom lens for the day as the dolphins provided more than enough moments to shoot them – and I quickly filled a 4GB card!

They say pictures are worth a thousand words – so here’s some of my favourite shots… (simply click to enlarge.)

Cruising back to port with albatrosses and seals now in tow too everyone reflected on their experience, still all buzzing with excitement.

Knowing that there was 900m of water underneath us and endless expanses of ocean around the boat made the experience even more amazing – if these totally wild, untamed dolphins didn’t want to hang out with a bunch of wetsuit clad tourists they’d be gone in an instant.

Everything was totally on their terms and I’m truly stoked with the fact I shared so much time in the water interacting with these amazing creatures.

If you’re in NZ make sure you pencil in the time to hit the waters off Kaikoura and get involved with the marine life, it’s something that you won’t forget in a hurry!

And with spectator spots at $90 and swimming places at $170 it’s totally worth the money. Just make sure you book ahead as the limited places fill up pretty quickly!

**But to save you some dollar the lovely guys have teamed up with me to offer you a 10% discount – simply quote “backpacker banter” and say you read this review when booking – always good to save some of your hard earned cash!**

For more information and to book check out the Dolphin Encounter website – www.DolphinEncounter.co.nz – and “like” their Facebook Fanpage to check out some more pics of the dolphins, whales and even Orcas that they encounter on a day to day basis.

**Please Note – I received a discount with Dolphin Encounter Kaikoura through my partnership with 100% New Zealand, but rest assured all opinions are honest and my own**