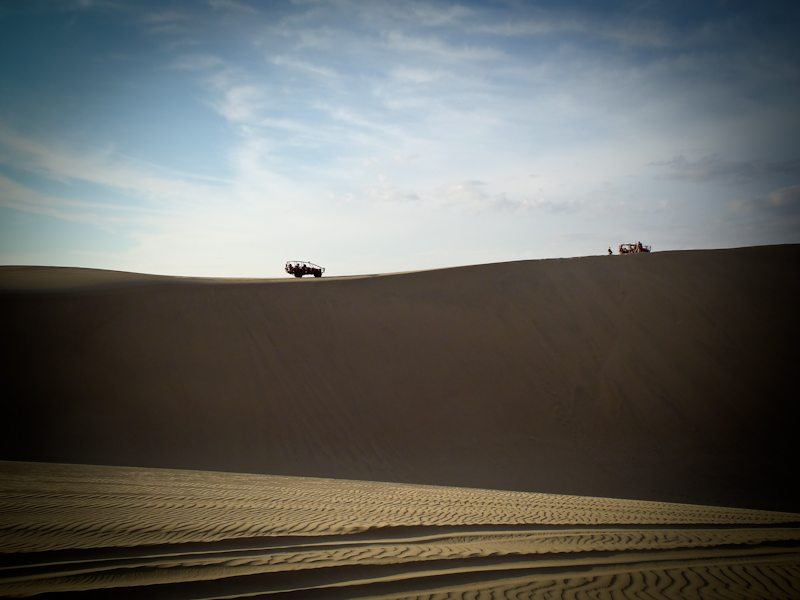 After a rather last minute decision to skip past Lima and head straight inland from Mancora I found myself in Ica, some 28 hour bus journey away (or around 7ish from Lima) …or more precisely Huacachina .

The reason for my stop in this sleepy desert oasis was pretty honed in on a single activity – sandboarding.

Having said goodbye to the ocean and surfing for the last part of my south american adventure (I’d spent EVERY day on the beach without fail over the last 3 months) I decided that I needed at least some adrenaline or board sports to tie me over.

I’d actually forgotten that sandboarding was an option (my planning is ok with travel, but the execution of said plans is less than adequate sometimes!) until one of my Mancorian buddies brought it up – and within 20minutes I’d amended my Cruz Del Sur bus ticket to fit it in.

The view from my accomodation and a quick stroll down the street was a mere taster of the sheer scale of the sand dunes on this towns doorstep and nothing quite prepared me for the beauty the 2 hour trip would entail.

Loaded up on a mental looking dune buggy me and 8 other backpackers – included my newly aquired travel buddy Megan – we headed into the unknown equipped with snow boarding boots, boards and a fittingly mental buggy driver.

As soon as we crested the first hill it became apparent that this trip was worth the 35soles (roughly £8) for the scenery on its own, the place was stunningly beautiful under the Peruvian evening sun – with the golden sands stretching as far as the eye could see.

The dune peaks creating snaking lines throughout the horizon, the only thing interrupting it was the dwarfed sillouettes of other like minded adrenaline seekers.

Our first stop was simply a scenic outlook to capture some photos of the town we were staying in – literally an oasis amongst the sand.

Then we hit a higher and steeper peak to get our first taste of riding the sandy waves.

Being a surf instructor and having dabbled in snowboarding a few years ago I was quietly confident, as was Megan who wake and snowboards back in the States.

After strapping in we both opted for the safer approach and took it slow the first time around, the sand offered a rather new experience and feel to the type of riding I’m used too.

It was fun – but I was craving a bit more speed!

The next peak was higher still – but after watching the non stand up riders of our group have an absolute blast lying down on the hill we both opted for that style – it was heaps of fun and heaps faster!

Flying down the golden slopes with the wind rushing past got me stoked and definitely hit the spot, to the point that even the snowboard instructor in the group wanted in on the action!

The third hill of the day was pretty dauntingly steep – but I went with the “go big or go home” mentality and opted to try standing again.

I’ll admit now that Im actually terrified of heights and was bricking it at the top! But peer pressure got the best of me and after watching one of the girls cruise down I had to keep my male pride intact and bite the bullet!

It was alot faster than the initial dune but I somehow managed to keep upright and was stoked to get to the bottom in one piece!

After a nerve joltingly bumpy and fast drive through the dunes we came to the final peak of the day and the driver took us right to the edge, much to the horror of the 2 girls in the front!

This hill was almost death slide steep and by far the longest of the day.

Not wanting to waste one of the biggest slides we’ve ever seen the entire group opted for the lying down descent.

Watching everyone shrink into a dot at the bottom – a mere trail of smoke like sand flying up behind them – left me knowing this was going to be the highlight of the day, and it didn’t disappoint. Everyone has a heaps good time!

After 2 hours we cruised back to the town as the sun sank into the sandy ocean that stretched before us, a true picture of the natural beauty of Peru – in a landscape that I hadn’t expected to find.

If you’re heading anywhere near Ica put in a 2 night pitstop and hit the dunes – definately one of my Peruvian highlights and well worth it for the adrenaline and gorgeous photos.