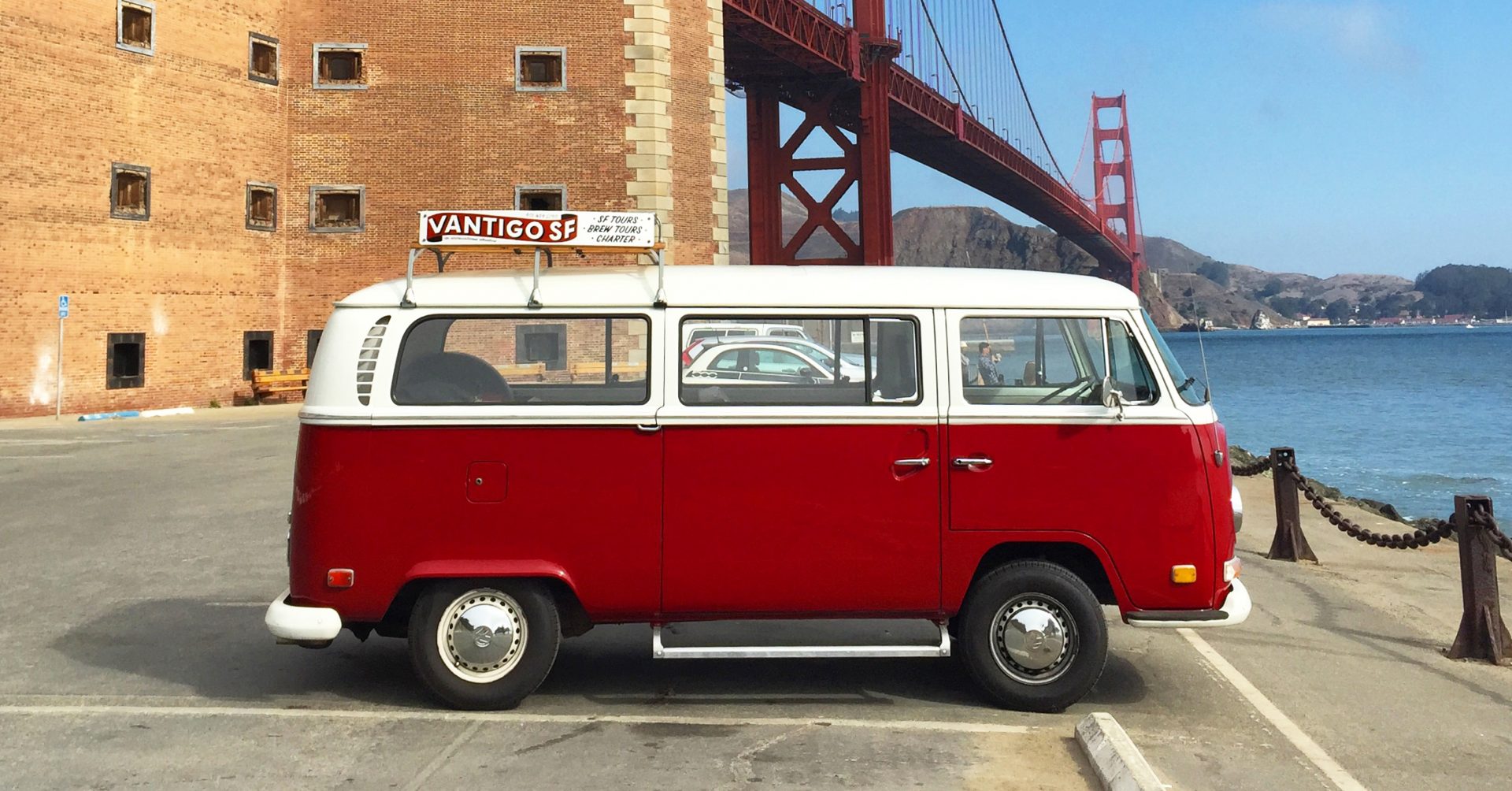 When I suddenly found myself in San Francisco on my last minute trip to California I was keen to explore more of what this city has to offer as California is full of bucket list items to see and do.

And not being a fan of cities (I’m a beach bum through and through if you hadn’t already gathered) I figured I’d jump on a to to check out the sites.

Well I was instantly sold on the fact the Vantigo team show you around their city in a  fully restored 1970s VW Campervan and it looked stunning!

Now as a surfer I have a huge soft spot for the old school VWs but I’ve never had the chance to ride in one – so jumping on Vantigo was actually just as much about experiencing that as it was about checking out the sights of San Francisco!

When she (yup she’s a she…her name is Lillie!) pulled up at the meeting point in the city I was stoked with how incredible the restoration on her had been – the guys at Vantigo have put some serious love into her!

It was a small group tour (max of 6 per trip) so after some easy ice breakers by our guide Luca we got started and from the get go it was going to be heaps of fun.

An Awesome Guide – And CHOCOLATE!

It was clear that Luca has a huge passion for San Francisco and he knows his stuff too. I’d brought Erin along with me and even as a native San Francisconite (is that correct?!) she was pretty stoked with how much information Luca was passing on.

But it wasn’t just a boring sit back guided spiel – Luca got everyone involved and audience participation was rewarded with chocolates…which quickly got everyone fighting to answer questions!

Throughout the course of the morning we motored through various parts of the city – including cruising past the famous Fishermans Wharf, up to the lookout at Coit Tower, to the ocean and at the Palace of Fine Arts – we even made an impromptu pit stop into the base of Lucas Films which the ever geeky Erin was pretty amped on!

In fact there’s over 20 areas of San Francisco included on the tour and 6 photo stops.

All the stops offered up plenty of photo opportunities and time to wander around –  Luca was more than happy to help set up some shots and take some pics for you, he’s a pretty solid photographer too which is always a bonus!

Of course though the highlight was the section which involved The Golden Gate Bridge.

This incredible landmark – the icon of the city – provided an epic backdrop for some awesome shots and with the red VW parked up in front allowed me to capture one of my favourite photos of the year!

However even if you do the Vantigo tour I also urge you to head back to the Bridge again too – there are so many vantage points to photograph it from and you can even cycle over it to get really up close.

My personal favourite was at sunset where you can walk along the beach front on the city side…so much sunset goodness to be had…but I digress!

For the final stop of the tour we headed into the outskirts of San Francisco – heading to a spot with incredible views across the city and the bay, the perfect finish to an amazing morning of sightseeing before beginning the descent back into town to be dropped off.

So What’s The Cost?!

A half day tour with Vantigo (I opted for the San Francisco City Tour) cost $67USD (approx £45) per person – so admittedly it isn’t the cheapest way to explore the city but it’s well worth it to tick off the main San Francisco bucket list items, get some epic shots of the city and of course spend a morning enjoying a ride in a VW Campervan!

I had a blast – as did the rest of the guys on board – and the Vantigo team were great company so it’s certainly something I’d have no hesitation in recommending if your budget can handle it, or a bit of an indulgence if you want to treat yourself!

For more information and to book check out vantigosf.com or check out their official Facebook page…

**PLEASE NOTE – I received a free tour with Vantigo SF, but rest assured all opinions are honest and my own**