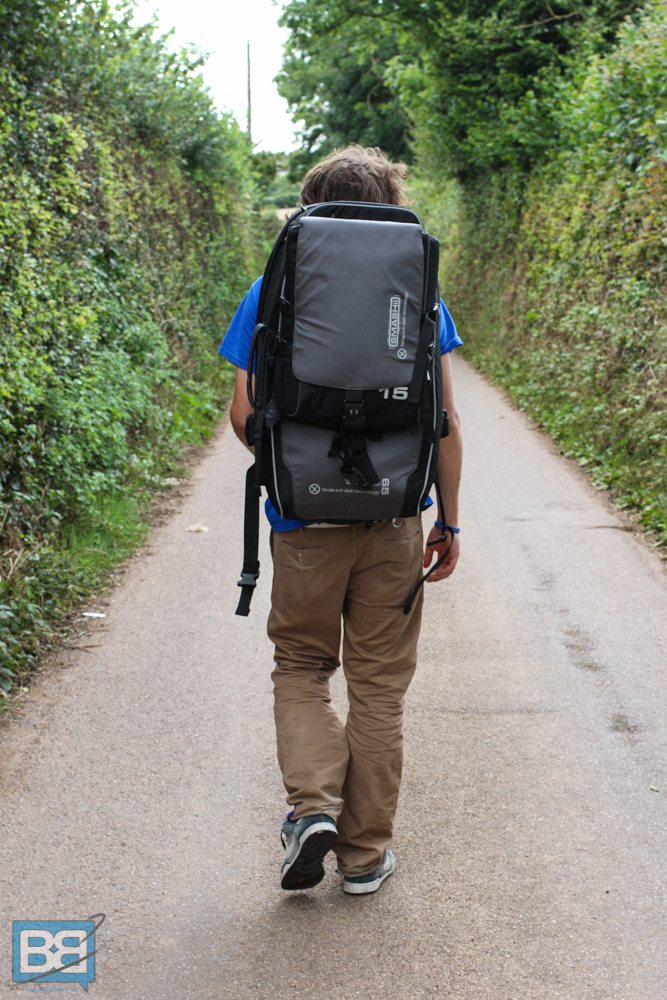 As a backpacker and blogger I get approached to review quite a few different products. A lot of these I turn down but occasionally something really interesting and solid lands in my email and makes me go “well that sounds pretty cool”.

The SMASHii Anti Theft Backpack is definitely one of those items.

The story behind the SMASHii range was very much the selling point for me – a backpacker gets his bag stolen whilst on the road, listens to stories about people getting their bags slashed and then decides to create a product to help people travel safer and more secure.

First off – don’t get freaked out, these things happen, but there’s no point backpacking the globe being scared!

Secondly if these are the kind of issues you’ve faced or are worried about I have no doubt that the SMASHii range will be of particular interest to you!

The biggest feature of the SMASHii backpacks are the inbuilt security features – it boats quite a few.

First off are the locking points and wire ties that form the integral part of the security. Positioned either side of the bag are lock points with retractable wire ties – this lock into the adjacent lock (open through a combination) so you can wrap them around a static object (think bed leg, pole etc) to secure the device quickly and efficiently.

Sure you can buy wire nets that encase any rucksack and are just as effect – but they’re yet another thing to carry around and they require you to keep track of locks and keys.

The beauty of this is the fact it forms a seamless part of the bags design – always there whether you need it or not and simple to use when the time arises.

No fuss, no worries.

These wires are also used around the entry point in the bag too – and they can be tightened and locked to make it a massive pain in the ass (if not impossible) to enter the main compartment of the bag. Another handy security addition.

The final – and most unique feature in my opinion – is the fact the entire bag (including the additional day sack) is covered in Kevlar fabric…yup the same stuff army kit  is coated with!

The main objective of this is to make the bag slash proof so opportunistic thieves can’t just cut a hole into your bag and empty the contents whilst you stand in the street unaware.

Given the fact this is a big deal for SMASHii it was the thing I was most excited to test – and armed with an industrial kitchen knife and builder Stanley blade I went to town on it!

Yup the knives did leave a mark on the bag – but it wasn’t cut, not the security of it compromised. I didn’t tread lightly either, the SMASHii stands its ground!

Not only does this provide and incredible security feature the use of Kevlar means this bag is going to easily deal with the rough environment of backpacking and I have no doubt that it’ll survive many years of hard wear and tear on the road.

Usually when products try to over compensate or become something else there’s a degree of compromise that is made.

The SMASHii though is still a solid rucksack and the emphasis on security seems to have added to its overall functionality as a backpack.

The main compartment of the bag packs an impressive 65 litres (which in my opinion is more than enough space) and the use of the suitcase style entry system means all your stuff will be easily accessible and simple to organise. Some people aren’t a fan of this style but I prefer it. As this folds open the back panel also contains a variety of storage pockets for documents and what not – adding to the open plan functionality.

Of course when you’re lugging around your life on your back comfort is one of the most important factors and the attention to detail on the SMASHii is continued in this area too.

Padded straps, adjustable back height and waist straps make the it sturdy yet comfortable to have on your back for a prolonged period – even fully loaded.

There’s actually not much more I can really say on that matter – the SMASHii doesn’t compromise itself as a backpack!

In comparison with many other rucksacks SMASHii have also built a solid and genuinely useable day sack. I find with many brands the day sack is simply an after thought, flimsy in build and more of a hinderance than an addition.

The 15litre day sack on the SMASHii not only boasts the same security features (including combination locks) but it inside it also offers a laptop sleeve and organisation pockets. Not only that but the straps continue the build quality and they’re genuinely comfortable and feel as sturdy as the main pack – it’s a day sack I’d actually use!

Even if the SMASHii lacked it’s security features I’d be telling you right now that it’s a solid rucksack and something I’d recommend to anyone looking to invest in a new rucksack.

However the fact is that the SMASHii is all that AND more – it’s built like a tank and has heaps of inbuilt additions that really set it out from the same same build quality and design of most rucksacks. I have no doubt that it will stand up against anything you can throw it’s way and for those who are worried about security on the road it provides a huge peace of mind.

Even if security isn’t a massive issue for you having those features as standard on a solid rucksack will mean you’ll probably end up using them anyway – there’s no excuse! They’re there and they’re easily accessed and utilised, you’d be stupid not to!

The only real draw back of the bag is it is slightly on the weighty side – but this may just be because I’m used to travelling on just hand luggage now!

This is slightly noticeable, however it’s the trade for the build quality – a trade I’m more than willing to make.

I would also prefer a top handle on the main bag and a clip to secure the top of the day sack to the main bag too – they’re certainly not deal killers though.

The bottom line for me is if you’re in the market for a new bag – either your first or an upgrade the SMASHii is a serious contender.

Although the brand lacks the established reputation of older makes SMASHii haven’t cut any corners and even from first impressions you know this is a quality rucksack built with backpackers in mind.

Well the SMASHii isn’t the cheapest option retailing at £199. However it is a step above other bags in that price range in features and build.

I personally feel that investing that extra cash will give you a bag that will far outlast it’s competitors.

I’m genuinely impressed with it and won’t hesitate to recommend it.

In fact this is now the bag I shall be using on my own travels!

You can find out more about the SMASHii range and order direct (with free UK shipping) from their website – www.smashii.co.uk

The winner will be drawn randomly at the end of the day on 1st Sept 2014.

PLEASE NOTE; I received a complimentary SMASHii Backpack to test out and review – but rest assured that all opinions are honest and my own