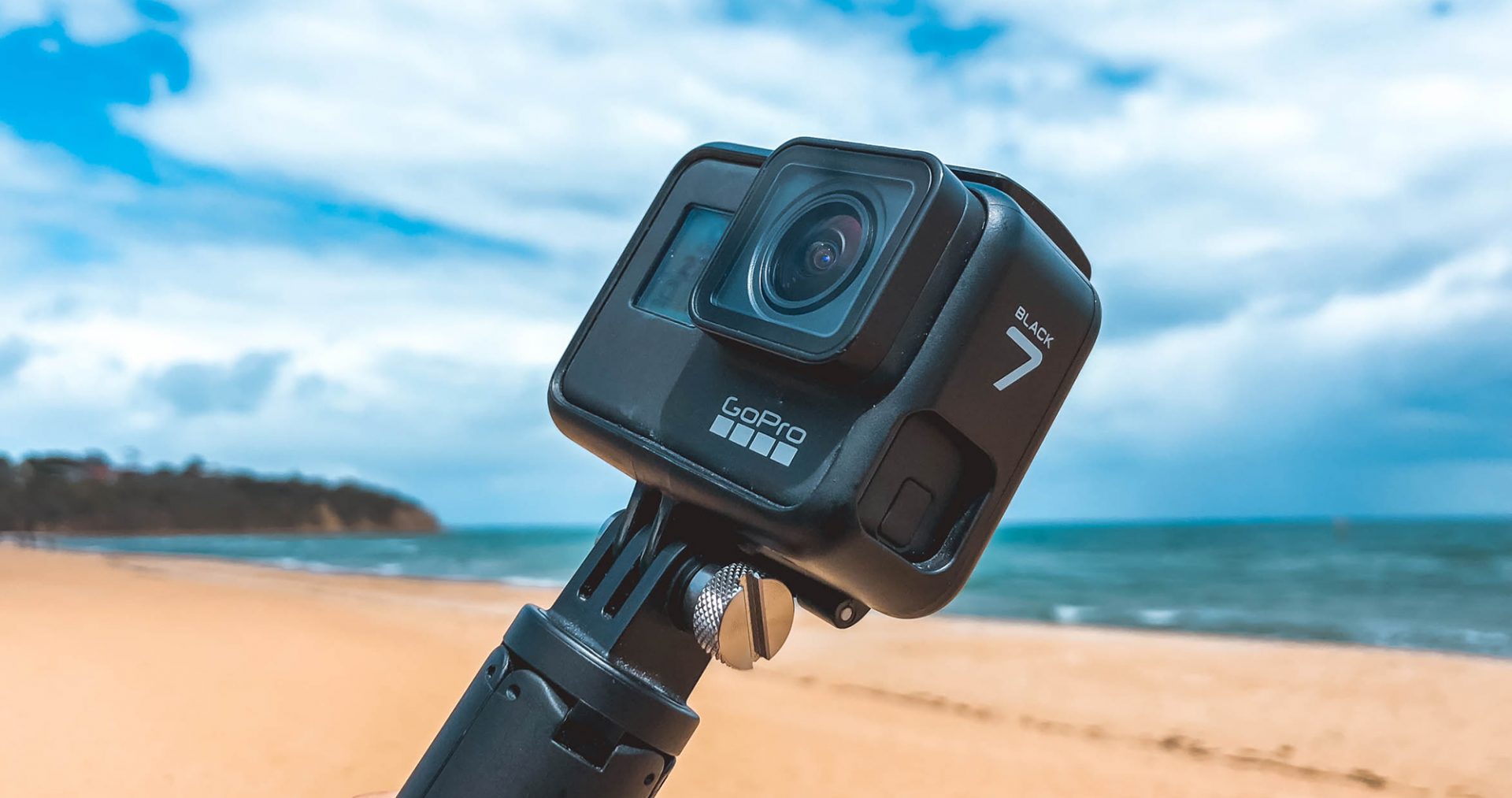 Thinking about buying a GoPro Hero 7 Black for your travels? Here’s my full review of the latest GoPro and whether it’s the ultimate travel camera…

When GoPro launched the new GoPro Hero 7 Black I was keen to get my hands on it and see what the latest evolution of my favourite action camera brought to the table.

On my previous reviews of the Hero 4, Hero 5 and Hero 6 I’ve mentioned that I’m a long time GoPro fan – I even had the first 35mm film version when they first launched waaaaaaay back – and the since the Hero 6 was only a slight upgrade on the Hero 5 I’ve been eagerly awaiting GoPro to take a bigger leap forward.

I’ve been testing out the GoPro Hero 7 for the last few weeks in Australia and Sri Lanka  (from surfing to skydiving!) so here’s what’s new and whether it’s worth adding to your travel kit list or upgrading…

Is It Really Much Of An Upgrade?

I’ve been travelling with the GoPro Hero 6 for the last year of my adventures and it’s served me well scuba diving in the Maldives, surfing in the Mentawais and road tripping around New Zealands North Island amongst other trips.

So when the GoPro Hero 7 Black was announced I was a bit dubious – sure it was touting some nice sounding features but was it really worth the upgrade?

Same look, similar specs and a few extra features like “HyperSmooth” and “TimeWarp” being pushed as the next big thing.

Having put it through its paces for the last few weeks on the road the short answer is yes the GoPro Hero 7 Black is a massive upgrade, even if you’re currently shooting on a Hero 6.

Despite the same camera look there’s a few tweaks under the hood of the GoPro Hero 7 Black, here are the most notable;

When I first heardabout HyperSmooth I must admit that I half wrote it off as a marketing gimic.

I’ve been using the DJI Osmo for the last few years as my gimbal/steadicam and it’s an awesome piece of kit. Sure it’s pretty chunky and takes up a good amount of space in my hand luggage but it was worth the trade for silky smooth videos.

My GoPro on the other hand is super portable, but the footage was always a bit bumpy and amateur, especially when it came to action shots like white water rafting or surfing – which is also what I used it most for.

So I was pretty curious to see how well this HyperSmooth compared.

I was instantly sold on the smooth footage! I literally hopped around the room filming and was just blown away by how much movement it could cope with.

Over the last few weeks I’ve really put this mode through its paces – skydiving in Byron Bay, surfing and most recently travelling around Sri Lanka – and no matter what I’ve thrown its way the Hero 7 has handled the challenge.

Working with Wide and Linear view this has now made the Hero 7 my go to camera for filming and my Osmo has not seen the light of day since!

Honestly HyperSmooth is by far the best feature of the Hero 7 and worth the upgrade alone.

It is worth noting that 2.7k 60fps is the highest spec this currently works, but that should be more than enough. I’m hoping a software update will allow the higher FPS settings to access this (as its all in camera processing), but I’m assuming GoPro will save this for a Hero 7 S or Hero 8 model.

“Honestly HyperSmooth is by far the best feature of the Hero 7 and worth the upgrade alone.”

Ok so HyperSmooth is now my default setting when shooting on the GoPro (why wouldn’t it be after all?!) but the other in camera mode that I’m absolutely loving is TimeWarp.

This mode allows you to shoot video time lapses which are all processed and stitched automatically within the camera – no Final Cut editing or speed ramping needed!

You can choose 5x, 10x, 15x or 30x speed depending on your subject (15x is my go to setting), hit record and off your go – the display then shows you how long your final TimeWarp will be.

Experiment with moving around subjects, spinning around on a walk or REALLY slowly panning sideways across a scene to get some really cool effects. You can also activate HyperSmooth in this mode too for the best results.

Although you can get this effect in post production (even using iMovie) being able to easily create these on the go is a welcome tool and if you’re following my Instagram Stories you’ll see them appearing quite a bit now!

“the other in camera mode that I’m absolutely loving is TimeWarp.”

Yes – All Your Mounts and Accessories Still Work!

One of the most annoying things about upgrading technology is finding out that half of the accessories you forked out on are now completely uselsss.

So huge kudos to GoPro for still allowing the GoPro Hero 7 Black to work with all your old mounts and accessories!

And yes that still includes the Super Suit (aka the dive housing) which I originally bought for my Hero 5 and my Hero 6 GDome for those lovely split screen in water shots.

It’s also worth mentioning that GoPro have also launched a few extra mounts recently too – including the lanyard sleeve (great for on the go shooting) an updated floaty handleGoPro V2.0 The Handler Floating Hand Grip – Black (one of my most used accessories) and a new Shorty mount, which combines a handle, mini selfie stick and tripod.

This is my standard GoPro mount for shooting whilst travelling as it cover me for pretty much every situation except the water.

“Yes – All Your Mounts and Accessories Still Work!”

How Much Is The GoPro Hero 7 Black?

With all these awesome in camera upgrades the GoPro Hero 7 Black is going to be the most expensive GoPro yet right?

Even more value for money, which is always a good thing!

Alongside the Hero 7 Black GoPro also launched the Hero 7 Silver and Hero 7 White which are even more affordable., however they do lack some of the new modes (most importantly HyperSmooth) and have stripped down specs – so personally the Hero 7 Black is still my personally recommendation.

I know that this term gets thrown around a lot in tech, but as a travel blogger the GoPro Hero 7 Black is certainly a game changer – especially for action video shooting and for anyone looking to up their video game without investing heaps in expensive, bulky kit.

Sure it’s still not perfect – but this is easily my favourite GoPro yet and has firmly found its place in my travel kit list as well as allowing me to shed some extra weight and space in my hand luggage, which any traveller will tell you is always welcome!

Already own a GoPro?

Will you be upgrading to the GoPro Hero 7 Black?