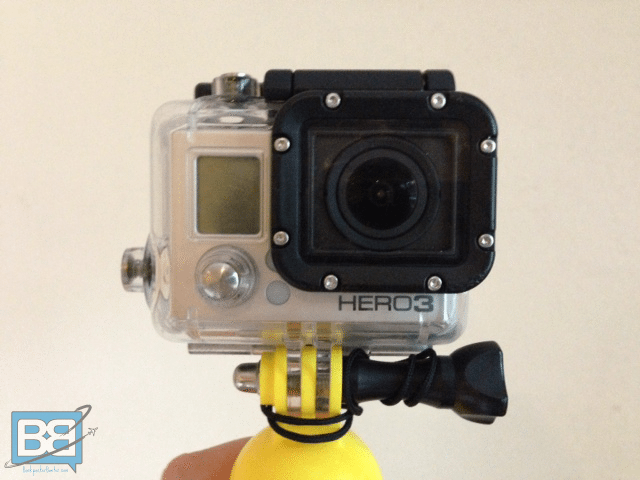 Backpacking adventures will find you in all sorts of situations and locations – from sprawling deserts to thick jungle. Blue oceans to bustling cities.

It’s inevitable that you’ll want to capture all your experiences too – so picking a camera to join you for the ride is a predicament most backpackers will find themselves. There’s heaps to choose from and it can be a bit of a minefield to negotiate.

This review focuses on the GoPro Hero 3 – however I’ve recently reviewed the new GoPro Hero 4 Range too, click to read my review.

I’ve owned GoPro cameras for a long time now – in fact I had one of the original 35mm film ones which strapped to your wrist in a rather cumbersome casing. It provided rather low quality, grainy images but it was the most affordable way to shoot in the water at that time.

These days though GoPro has created and dominated the extreme sports photography market – from a consumer perspective at least.

Gone are the days of 35mm film and they’ve evolved into the digital age. I’ve personally owned all of the GoPro models – and most recently I invested in their newest creation, the Hero 3.

The Hero 3 range tackled quite a few things I wanted as a photographer. It’s lighter, smaller and got a good bump in the spec side of things – especially when it came to the movie modes.

As a diver they also finally tackled one of the most annoying aspects of the design and inbuilt a flat lens as standard. Which basically means it can focus underwater properly – something the old curved  casing didn’t allow and meant you had to shell out £50 for a dive housing which was rather annoying!

They also released 3 models – the white, silver and black edition – which not only varied in spec but more importantly for backpackers had 3 different prices.

One of the biggest draws for anyone looking at the GoPro range is the pure versatility and durability of it.

First off it’s waterproof – which means you can literally take it anywhere; oceans, rivers, snow, land…you name it! Not only that though but it’s waterproof to a staggering 60m, so whether you’re snorkelling, freediving or scuba diving you have no worries capturing the underwater world.

The versatility of the GoPro is by far it’s best advantage though. GoPro themselves have a varied range of accessories to suit your personal passions and allow the GoPro to tag along – things like helmet mounts, surfboard mounts, head straps and an LCD screen allow you to capture all kind of extreme sports and situations.

They also sell setup packs too aimed at specific sports – including the surf pack whihc is what I opted for.

Third parties have filled the gaps GoPro have left though and there’s literally hundreds of accessories you can buy for them – and the combinations mean your creativity is only limited by your mind!

If you have a GoPro here’s some of my personal favorites to help you make the most of it;

Matt from Expert Vagabond also has a great post on his favourite GoPro accessories and he’s even made some himself – including a genius plunger mount for rafting!

The HD3 also comes with a wifi remote too allowing you to control the camera (or up to 50!) from a distance. It’s something that doesnt work particularly well in water (especially surf) but on land or snow it’s a great little tool.

And then of course there’s the new GoPro smartphone/tablet app which allows you to live view what you’re shooting, control the camera modes and shooting and with the new update preview footage and delete it too…which is a feature I’ve long been waiting for, especially if you don’t have the LCD back.

Personally I’ve spent most of my time capturing still images with the GoPro – the fish eye lens creates and amazing perspective and images are my main media of choice and the quality it produces are more than adequate.

Whilst surfing or diving I set it up on timer mode – in which the camera automatically takes an image at the pre selected intervals.

For surfing I usually set this at 0.5 seconds so I capture all the action (although picking out the good ones and editing is a nightmare!) and for diving I use 1sec intervals as it’s usually mounted on a telescopic pole and I can simply shoot for a distance.

The movie mode is something I’ve started utilizing more and more though and I’m stoked with the results of this too. The Hero 3 Black can shoot incredible high HD footage, however I find the file sizes and performance needed to edit this too high for my needs and I actually shoot at 900fps which is still epic quality!

Putting It To The Test

I’ve tried out my GoPro in a wide range of conditions and I’m stoked to say it’s allowed me to capture some amazing footage – both stills and video. Here’s some of the places it’s accompanied me to;

It’s a good range of places I’d never even have considered taking my DSLR to and as such it provides some pretty unique pictures I couldn’t have dreamed of capturing without it. Here are a few of my favourite images to date…

For me the GoPro is far from being my day to day camera (my iPhone takes that title) but it’s easily one of my favourite kit list items for backpacking.

My recommendation is that if you’re into video making/editing it’s a must – the size, cost and quality ratio make it a no brainer.

When it comes to being able to capture unique images in tough conditions it’s a great addition to your backpack too. Your backpacker travels will find you trying heaps of amazing things you may never get the opportunity to experience again and for me being able to capture those memories is really important – not just for the blog but to be able to show friends/family and look back on down the line.

Things like tubing in Laos, learning to surf, skydiving or SCUBA diving will all no doubt be on your bucket list – and it’s something a GoPro will easily be able to handle.

And of course if you’re into any extreme sports there’s no other camera that offers that level of versatility, customization and quality.

Personally I wouldn’t hesitate to recommend that most backpackers consider adding one to their packing list.

Do you have a GoPro – how’ve you found it on the road and what are your favourite shots?

Looking to buy the Hero 4? Click here for my latest review!

Or here for the GoPro Hero 5 Review

And now my review of the GoPro Hero 6 too!
.