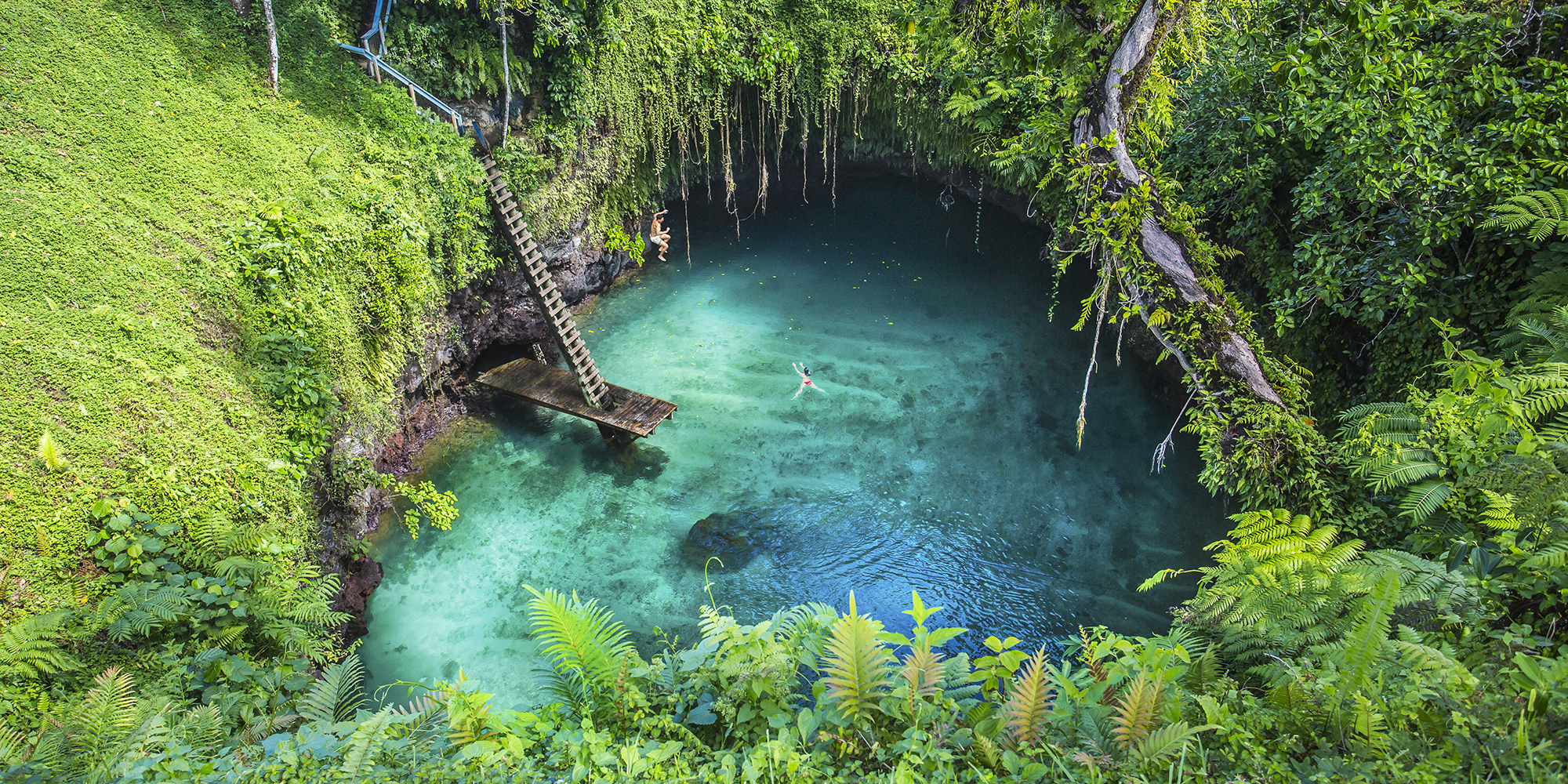 Situated in the Pacific between Fiji and French Polynesia, Samoa is made up of a cluster of 10 islands, several of which offer a stunning coastline that abounds with natural wonders. While several islands are largely reserved for wildlife, two main islands have become major sources of tourism for Samoa including Upolu and Savai’i.

Regardless of your nationality, you can visit Samoa for up to 60 days without having to obtain a visa. While you could no doubt fill 60 days with exciting experiences, you can easily see many of Samoa’s major highlights during a shorter 7 day stay.

Whether you’re thinking of a destination wedding or simply want a relaxing yet adventurous getaway, let our Samoa travel guide assist you in planning the perfect 7-day getaway in Samoa.

Upolu is Samoa’s main island and where you’ll find the nation’s capital Apia. The most populated of Samoa’s islands, Upolu is home to vibrant markets, energetic nightlife, and abundant natural wonders. Whether you’re looking to pamper yourself with spa treatments or lace up your hiking boots to explore the island’s wild side, Upolu has what you’re looking for. 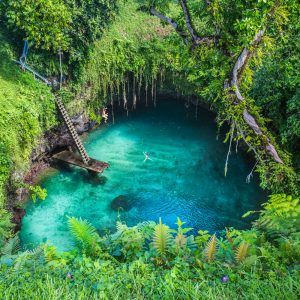 Don’t miss the opportunity to hike the steep but short Lalomanu Crater Walk for exceptional views of the ocean and extinct volcanic crater, possibly saying hello to the resident flying fox bat colony that resides there.

If waterfalls are more your style, be sure to check out two of the island’s finest which include the roughly 100-metre Papapapai-Tai Falls and Togitogiga Falls where you can enjoy a refreshing swim.

More swimming can be had at the To Sua Trench, a dramatic swimming hole fed by ocean tides through lava tubes. A staircase will lead you down into the swimming hole from the gardens above, where you can swim through caves and take in the beautiful natural wonder which has become one of the most photographed locations in the South Pacific.

Beach lovers will want to check out Lalomanu Beach, the island’s most notable, while history buffs will be captivated by touring the former home of legendary writer Robert Louis Stevenson.

It is he who wrote the classic adventure novel Treasure Island, and the author spent his final years in Samoa after being captivated by the culture and beauty of the islands.

His former home has been converted into a museum that displays a large collection of artifacts relating to the author. You can also pay a visit to the nearby Mt Vaea National Reserve where the author was laid to rest.

Samoa’s largest island, Savai’I is often referred to as the “Big Island” and is just a short ferry ride from Upolu. 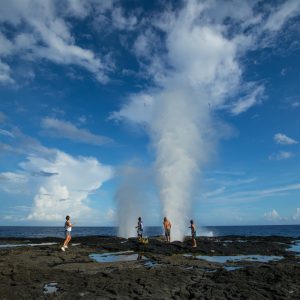 While there may be fewer human inhabitants on Savai’i when compared to Upolu, the island is a nature lover’s paradise where one can get lost in tracts of rainforest or be mesmerized by lava fields and blowholes.

The island’s Tafua peninsula is home to one of the most precious rainforest in the South Pacific. The forest is a birdwatcher’s paradise where the endemic and critically endangered tooth-billed pigeon, Samoa’s national bird, may be spotted around areas like the Tafua Savai’i crater.

Pay a visit to the Alofaaga Blowholes to see dramatic jets of water get sprayed up through lava tubes to heights of nearly 100 feet. Locals have been known to throw coconuts into the blowholes to allow visitors the chance to see them get shot into the air like cannonballs.

Check out the old church ruins of Falealupo which were leftover from devastating cyclones and get up close and personal with sea turtles at the Satoalepai Turtle Sanctuary. Afterwards, enjoy a picnic at the fascinating Sale’aula Lava Fields.

Spend the afternoon relaxing on Si’ufaga beach or explore the island’s caves with a guide such as Pe’ape’a Cave or Paia Dwarfs Cave where you can attempt to spot mythical dwarves that folklore believes roam here.

Intrepid travelers may wish to arrange a day trip to one of the smaller, less populated islands for a bit of seclusion and truly unspoiled natural beauty. Experience Samoa’s two other populated islands which include Manono and Apolima. Here, you’ll discover small villages where locals tend to be self sufficient and more devoted to old traditions.

The remaining islands, several which are remnants of eroded volcanic tuff rings, are devoted to conserving habitat for rare and endemic wildlife. Although they are uninhabited by humans, day trips can be made to enjoy memorable off the beaten path experiences. You even have the opportunity of spending the night on Namua Island by sleeping in a beach hut which is known locally as a fale.

A Samoan holiday allows you to experience the Fa’a Samoa or “The Samoan Way”. Scattered throughout the islands of Samoa are hundreds of villages which are led by matai or chiefs and centered around a community church. 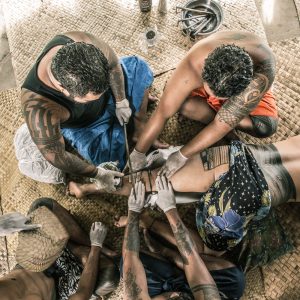 Samoans largely follow Christianity, although there are small numbers of Hindus, Buddhists, and Muslims that call the islands home as well.  Two notable churches worth visiting include the Conception of Mary Cathedral and Baha’i House of Worship.

One of the best ways to fully immerse yourself in the local culture is to visit during September when the annual Teuila Festival takes place. The festival has become one of the county’s most celebrated events, showcasing local dance, music, food, and craft. You can catch tattooing and carving demonstrations as well as partake in fresh seafood feasts cooked in a traditional ground oven known locally as an umu that uses hot volcanic rocks to cook local dishes.

If you don’t happen to be visiting during the festival, you can thankfully join one of many special Fiafia night celebrations which are offered weekly through local hotels and resorts. The celebrations often include traditional Fa’ataupati slap dances and Siva Afi fire knife dances in addition to a delicious umu feast.

Samoa’s capital Apia is home to the Samoa Cultural Village, a place where visitors can dive into Samoan culture and gain a deeper understanding of the traditional way of life on the islands. Free tours of the village are held several days a week and allow you to attend creative workshops, see artisans in action, witness and partake in special ceremonies, and purchase unique handmade crafts.

You’ll also learn about the deep level of respect Samoans have for their elders, family, the community, and the environment. This respect and genuine hospitality spills over to the many travelers that visit Samoa from all around the world every year.

With so much outdoor recreation available on the islands, it’s easy to embrace the abundant natural beauty found in Samoa. 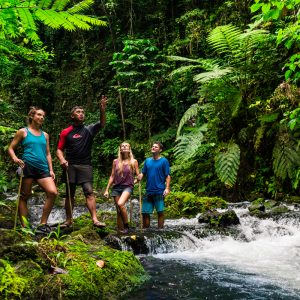 Hikers can set out on trails through national parks while professional fishing charters are available daily to take fishermen on an unforgettable day on the water where you may reel in a marlin, mahi mahi, or yellowfin tuna.

In April, you can catch extreme fishing action during the annual Samoa International Game Fishing Tournament.

When it comes to sports, the islands are home to a number of great golf courses including the Royal Samoa Country Club and Le Penina Golf Course. Cricket, rugby, and tennis are also popular on the islands. March marks the start of the surfing season in Upolu and ideal waves last until around November.

Over in Savai’I, you can catch incredible South Pacific surf breaks from December to February. Those wanting to explore what’s beneath the sea will be glad to know Samoa offers incredible snorkeling and scuba diving sites where nearly a thousand different varieties of fish can be observed along with dolphins, sea turtles, rays, and whales.

In a country as naturally and culturally rich as Samoa, it is important to ensure that tourism plays a positive role in communities. By exploring this country in a socially responsible manner, tourists are able to enjoy the best of Samoa whilst putting money back into the local economy.

This spending helps to support community development and local conservation efforts, ensuring Samoa is protected, both for locals and tourists for years to come.

What are you most excited about? 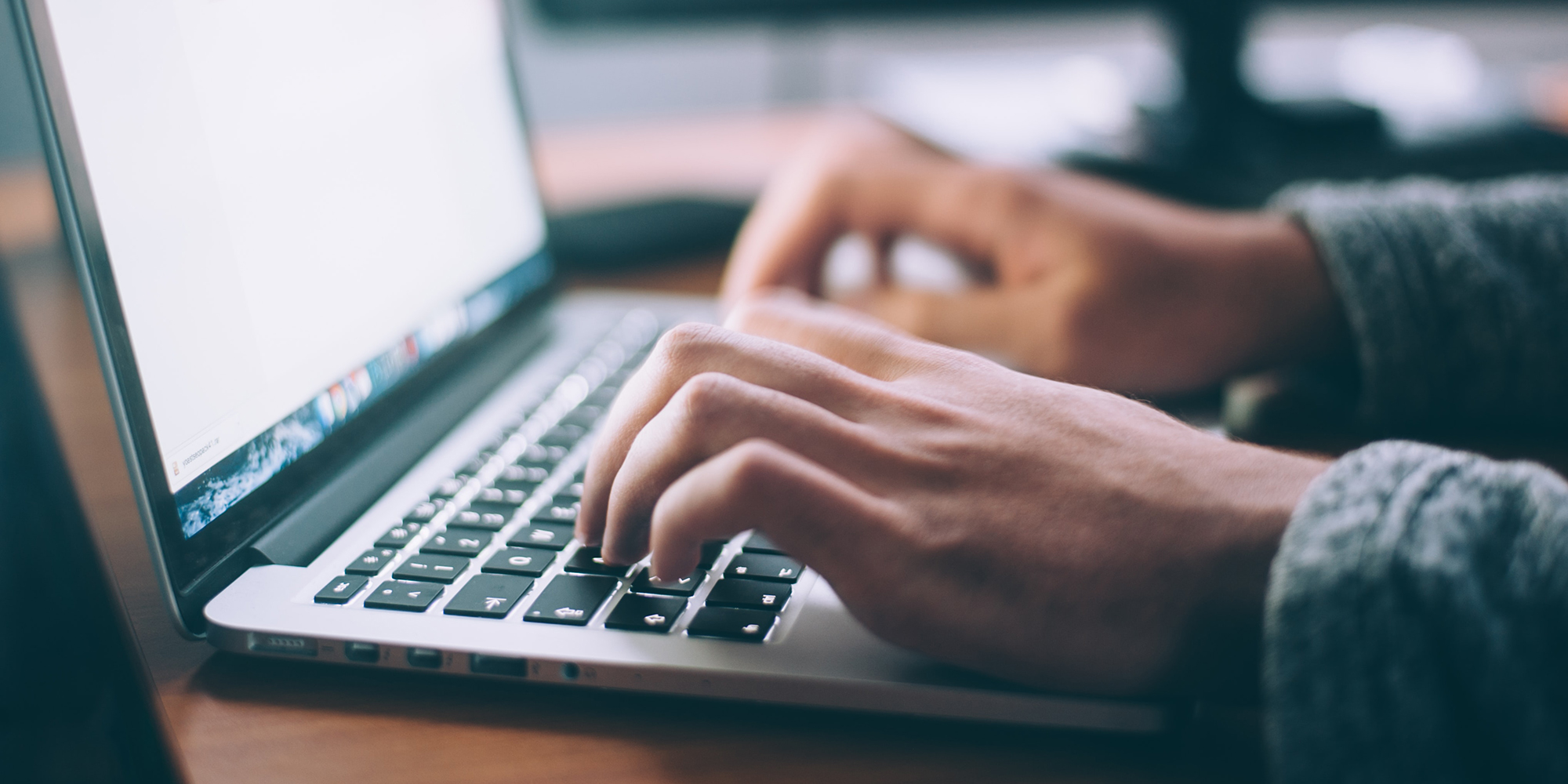 ← Previous
How To Find A Backpacker Job In Australia 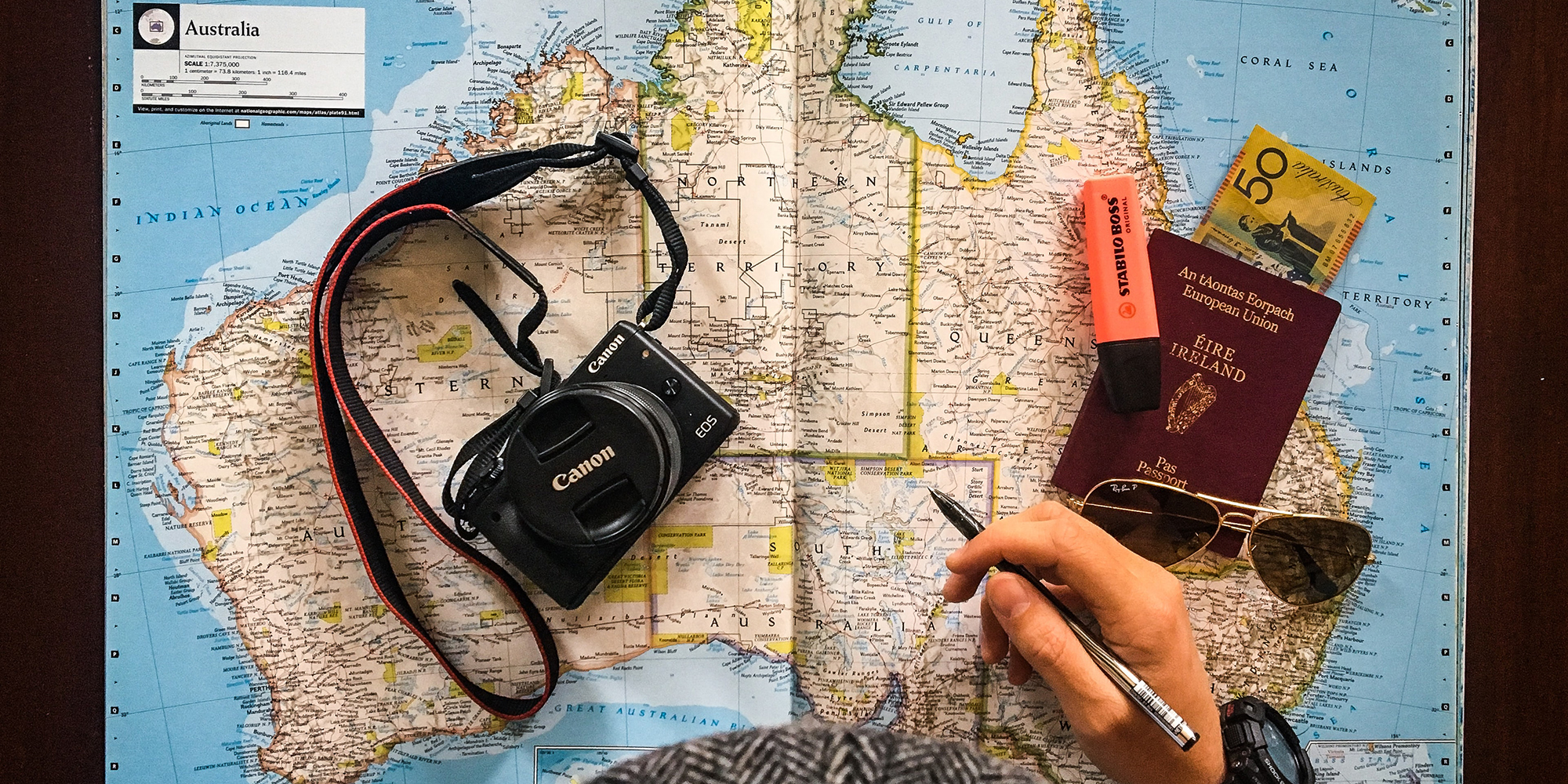 Next →
The ULTIMATE Itinerary For 2 Weeks In Australia
Click here to cancel reply.

Samoa is beautiful, we love handling adventures there! An incredible place with incredible people!

Payton | In The Flux

I don't know much about Samoa, but all the pictures and videos it seems so incredible. It's definitely on my bucketlist now! Thanks for sharing such a beautiful place!

Samoa definitely is on my list! I think the culture is always what has struck me most. I know nothing of it except some people Ive seen on TV shows but it had me curious. Apart from that the land is simply stunning and that would eb a major draw factor for me!

I love to spend sometimes in Upolu, I heard about it and its also in my list but something I yet left to checkout :/