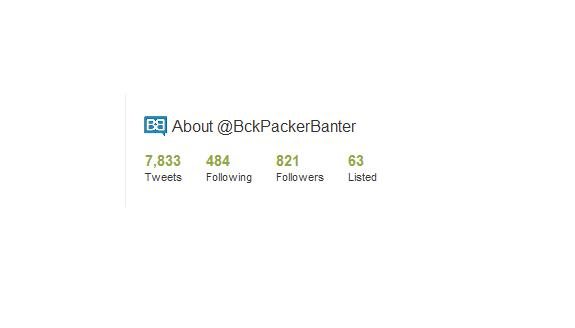 2011 was an exciting year for my blogging – after setlling back into to life in the UK after a year in Australia and combined with my job at STA Travel I decided to focus my blogging in a more professional manner and relaunched it as backpackerbanter.com

As part of this I immersed myself in the blogging community, joined twitter and general soaked up all the travel related goodness the web has to offer.

Through this I’ve met some great people, read some hilarious stories and kept myself entertained instead of working!

So here’s My Top Blogs/Bloggers/Tweeps for 2011 (in no particular order may I add!)…I look forward to the ongoing banter!

Adventures With Dan – out of everyone on the list Dan is the person I’ve spoken to heaps! Despite his current lack of travels (he’s back in the UK saving some dollar) he’s still producing some epic posts and his twitter convos are always sure to make you smile!

The Travel Hack – The lovely Monica has just relaunched her blog too, and with all her tasty trips through her work at Gap Daemon she’s got a lot to chat about. She’s also good banter if you fancy a pint!

No Place to Be – On the lead up to my time in Thailand earlier in the year and also due to the fact I shall be heading back soon Kirtsy and Poi’s extensive travels through Asia mean there’s heaps of inspiration and carnage! Also a great blog if you’re looking to teach abroad.

Pack Your Passport – This is in no means linked to the fact she’s about to head to my beloved Byron Bay, but Bev is about to hit the road again across Australia after a working stint in Melbourne, I’m sure they’ll be a lot for her to write about and I’m intrigued where she and the other half will head afterwards…

Never Ending Footsteps – Possibly one of the most entertaining travellers to follow on twitter. The lovely Lauren started her RTW trip earlier on this year and the poor girl seems to land herself in all kinds of trouble – whether it’s being ripped off to the tune of £50 by a Russian taxi driver or being molested during a Thai massage she’s embracing it all!

Break Away Backpacker – Jaime has come up with some classic risque posts this year which have opened my eyes to a whole new side of travel. He’s currently just finished a mini photo series taking shots of prostitues in Athens, and when he’s not doing that he’s giving a no detail spared account of getting a hand job on a bus or the infamous dark rooms of Germany – probably not the best read at work, but there’s loads of useful travel info in there too!

My Postcard From – Paul has been travelling for a while now and he’s producing some great posts from a whole manner of countries, he’s also trying to collect as many postcards and posts as he can from as many countries as possible, so get involved and send him some love!

Adventurous Kate – Another blog that I got hooked on whilst reseraching Asia – Kates covered heaps of places in this area and has soem great stories. From surfnig with the Rip Curl guys in Indo through to her boat sinking at night in Halong Bay. She’s now based in the UK but still bouncing aroun the world!

Travelling Editor – Not only does Dylan provide some good banter over a few beers but his blog is pretty good too! He’s studying journalism so it’s a damn good read and he’s networked right into the blogging community helping host things like #TTOT and attending lots of press trips – so there’s always something new going on!

Roo Around The World – Rusja is actually one of my customers from my time at STA, so on a personal note it’s great to see how all my hard work has resulted in an awesome trip! She’s only been on the road a couple of months but is producing some great posts and pics! I know what’s in store for her trip but I’m going to leave it as a surprise for you!

Backpacks and Bunkbeds – Neil runs some great features including TBI (Travel Blogger Interview) so it’s a great way to discover some new reads. Loving some of the photgraphy he’s taking and his Top5 and guides are a good read. He’s also covered a whole heap of countries so there’s something for everyone!

Biten By the Travel Bug – One of my favourite Aussie bloggers Nichole provides some great reads and is always game fro some amusing twitter banter. She’s got a few exciting travel plans in the pipeline – including the Big Apple for new years – so definately one to watch asap!

Travel With a Mate – A bit of a mixed bag from a site I guest post for – which is great as you never know what’s going to be posted next! TWAM have just relocated to Singapore too, so there’s heaps of awesome Asia content coming through at the moment.

The Aussie Nomad – I love Chris’s breakdown budget guides, possibly one of the best blogging ideas I’ve seen in a while. If you’re heading to Europe it’ll help you out endlessly. He’s also a dab hand at website and wordpress help, so a useful guy to keep on side!

Homeless and Confused – Julia is determined to travel ALOT during 2012 – she’s even sold her house to fund the trip! Now that’s commitment to the backpacking dream! She’s currently getting things all sorted for her departure in February, so definately one to keep an eye on!

Reclaiming My Future – When Toni isn’t chatting about sex, men or chocolate boobs she also produces some great travel blog posts too! She’s got back from an epic trip in Africa so there’s loads of posts and beautiful pics filling up the time whilst she’s back in the UK. And she’s not afraid to speak her mind so it’s definately a refreshing read!

RTW Backpackers – A massive bias towards this site as it’s a collaboration I’m involved with! It’s yet to be launched but rest assured it’ll be taking a whole mix of input from a few of the names on this list, so whether you want drunken carnage, RTW advice or simply some pretty pics make sure you follow it on twitter for the upcoming launch info

Also worth a mention – but not independant bloggers – are the following that I’ve been reading and even guest posting for;

STA Travel – I’ve been working at STA for the last year so they were bound to make the list, they’ve just launched a new blog showcasing heaps of destinations, advice and products.

Flight Centre – I’ve done a few guest posts for these guys and there’s some more in the pipeline too, again showcasing lots of places and experiences

Hostelbookers – A brilliant place to sort your accomodation on the road, but also running a brilliant blog too – including blogs of the week and heaps of competitions!

Gap Daemon – I shall be annoucing some exciting news regarding the lovely team at GD in the next month or so, happy days indeed! Their blog has a good mix and they’ve got a growing community of travellers through their profile section so sign up and get invoved!

GapYear.com – I joined the GY community the day I booked my flights down under, I went to some meetups, ended up travelling the West Coast of Oz with 8 other members and even ended up dating one! It’s got a solid community, some awesoe advice and heaps of forums to share, chat and generally get you stoked for your travels!

I hope you enjoy all the banter from my list – add them to your twitter, check out their posts, RSS feed them, comment on the chaos and enjoy the heap of stories that they’ll be sending your way over 2012!

And of course my RTW trip kicks off Jan 4th so make sure you keep up to date with Backpacker Banter throughout the year aswell – not that I’m bias or anything!