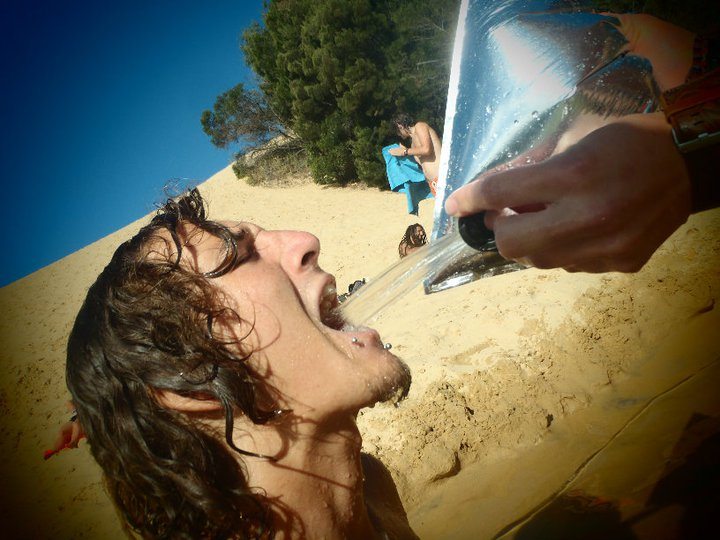 Is Goon Really All That Bad?!

Goon is a staple of backpacker life in Australia and love it or hate it….you’ll no doubt end up drinking it! So what is goon and is it really all that bad!?

You land in Oz with your hard earned cash, your old life and troubles are thousands of miles away.

The first things on your tick list of things to do in Oz is too catch some rays and then hit the town or enjoy a cold beer after a surf.

This is probably the first major culture shock for anyone coming into Oz, and it’s something that isn’t addressed in any Lonely Planet Guide – alcohol is EXPENSIVE.

At home I could easily pick up 2 crates of beer or cider for £20 – which is roughly $36. In Oz however it’ll cost you more than that for a single crate!

And pubs and clubs are even worse – with Tequila shots hitting the $10 mark and a vodka Redbull ranging anywhere from $10-$20!

Inevitably you resort to pre drinking to avoid getting stung in the clubs – plus its more social and you get to meet everyone you’re staying with and lay down the foundations for pulling the hot Swedish chick who’s next door.

Even still there’s the money dilemma.

Now I’ve heard along the way that Goon is actually aboriginal for pillow.

I have no idea if this is true and I gave up googling it after about 10 minutes! But I like the theory behind it and it makes the whole concept of drinking wine from a foil bag much more culturally relative!

Goon is the vary basis on which a backpackers night in Australia is based. It is also the basis for many backpacking debates.

It seems goon is much like marmite – you either love it or you hate it. But unlike marmite even if you do hate it your dwindling funds mean you are forced to consume it regardless of if you think it’s rancid or not!

So why are backpackers so split on the Goon opinion?

Even though I myself like goon, I kind of knew from the offset that the pros list would be sparce and I’d be clutching at straws to fill it up. But I’ll give it a go anyways…

No one can argue that goon is by far the cheapest drink you can get you’re hands on. It’s the main reason you buy it. A box can range from $20+ for a “nice” wine right down to $10 for 4.4litres of the stuff!

Most people drink goon. It is the status quo of drinking in hostels. If you rock up to a room party with a crate of beer you’re either going to be looked upon as a flashpacker or simply find most of your beers are nicked when you nip to the loo.

Ok so its linked to price but volume is a big part of goon. 4 litres for half the price of 6 beers….it’s a no brainer.

There are so many goon related drinking games it untrue – if you don’t believe me simply hit a hostel party and tell someone you want to “Slap the Goon” – enjoy!

On the face of it I thought this list would be easier to compile…interesting! Although it did start picking up the pace after a while!!!

The number one goon con is by far the hangover. Goon hangovers last all day and are one of the most debilitating of hangovers, second only to that of whiskey! Drink lots of water, fill yourself with a fry up and wait it out.

In the course of my ‘research’ I have come across many a backpacker (including myself) who find goon affects their sleep. Everything is more colourful and surreal. It’s weird. It’s unexplainable. But it happens!

Less face it most goons aren’t the top end of the French vineyards. Far from it. Beware the cheaper goons with their vinegar like after taste and the fact they are produced using nuts and even fish products!

Goon is a nasty adversary of the social drinker. You can drink it quickly and it doesn’t seem to affect you. You can easily forget you’re consuming schooners of wine.

Then BAM. It hits you. You’ve gone from 0 – wasted in an extra cup and now you find yourself with the impulse to strip, be sick or pass out.

Everyones done it. That last drinking game where you wanted to stop but simply had to be cool and keep going tipped you over the edge. You can’t piece together the night and your head is pounding.

Then you roll over.

If you’re lucky it’s the nice Swede you were eyeing up whilst playing ring of fire. But more often than not it’s going to be her not so attractive – in fact rather hideous – room mate. Goon impairs you’re judgement! Beware

In my mind at least it seems that despite its reputation goon actually has a lot going for it. Who would have thought?!

There will always be those who detest it. But that’s life. You have to role with the punches and simply get the job done – just accept you worse travel nightmare and best travel companion now come conveniently boxed in a foil bag!

Embrace the carnage – go get messed up and make some bad decisions, your in Oz after all!