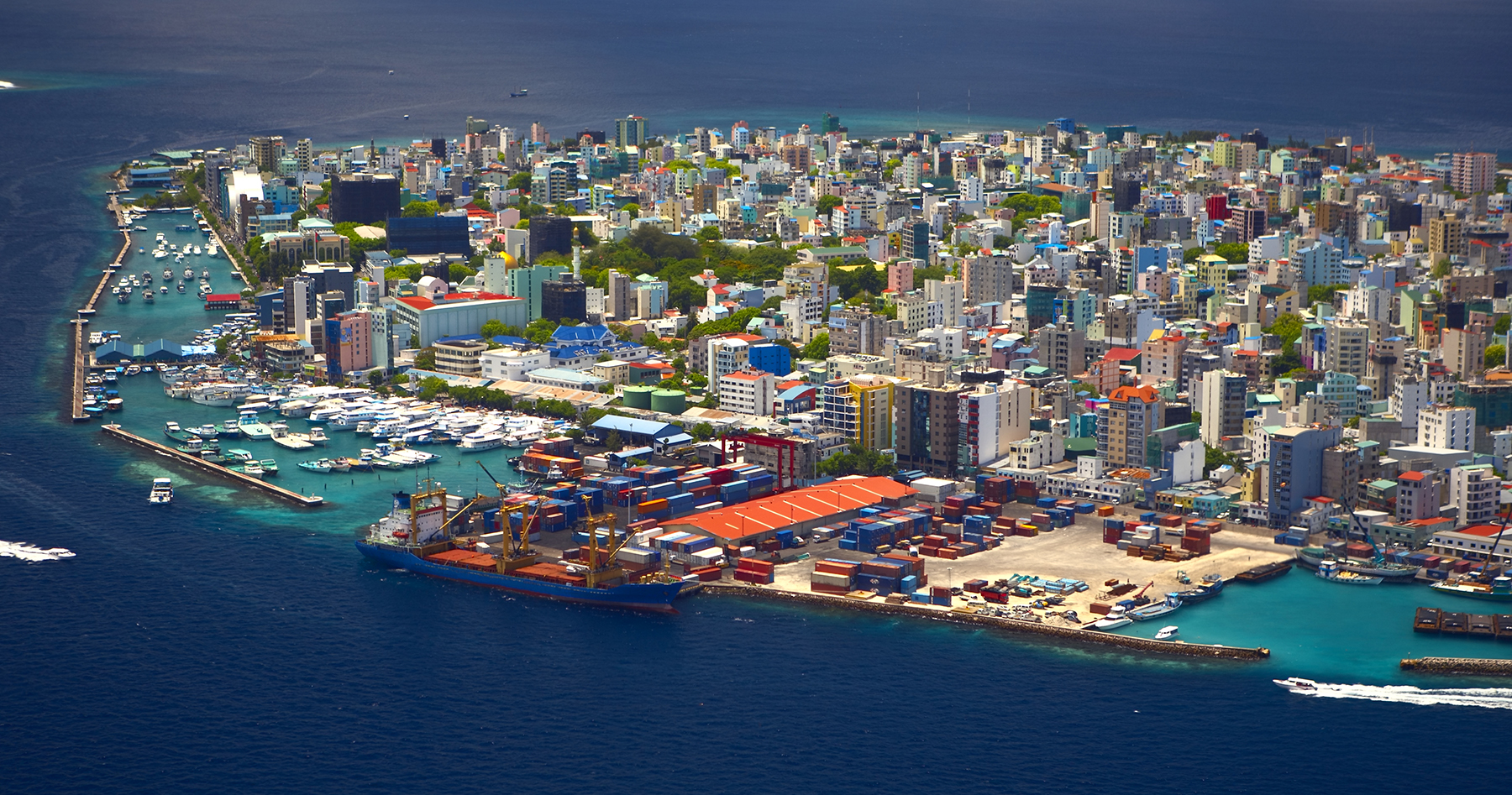 A locals guide to what to see, do and eat in the capital of The Maldives, Malé – so you can make the most of your time travelling The Maldives.

If you’re heading to The Maldives – whether it’s surfing, diving or honeymooning – the chances are you’re going to need to spend a day or even near the airport, either whilst waiting to join your transfer or to fly home.

With the capital of Malé only 10 minutes away from the international airport and a left luggage facility with prices starting from US$5, it’s well worth having a mosey around Male’, even if you only have a few hours to spare.

With an estimated population of more than 150 thousand and an area of 5.8 km2, Male’ is one of the most densely populated cities in the world. Simply witnessing the hustle and bustle of the city is worthwhile, as it is in stark contrast to the quiet, slow-paced life of the outer islands.

The island was once referred to as the King’s Island and has always been the centre of commercial and economic life in the country.

What to See In Malé

Although few edifices of much historical value remain in the city, any good day trip to Male’ begins in the environs of the country’s oldest mosque; the Friday Mosque or Hukuru Miskiy. Built in 1658 during the reign of Ibrahim Iskander I, the mosque has been in continual use ever since, with the wide unusual minaret being added ten years later.

Interestingly, it was built on the site of a much older mosque, built in the 12th century when Sultan Mohamed Bin Abdullah converted to Islam and tore down the temple that occupied the spot previously. The Hukuru Miskiy consists almost entirely of interlocking coral stone blocks, and the intricate carvings on the exterior represent some of the best examples of Maldivian craftsmanship, as do the exquisite lacquer calligraphy and wooden carvings inside the mosque.

Directly opposite the Hukuru Miskiy lies another important historical site, known as the Medhu Ziyaaraiy.

This small blue and white tiled chalet-like edifice is actually a tomb, holding the sarcophagus of Abu Barakaat Yusuf-al Barbaree, the Moroccan traveller said to be responsible for converting Maldives to the Islamic faith after (according to legend) taming a wild sea demon in the 12th century.

Less well known is that another man also lies entered here, Sayyid Rasgefaanu, an Arab who ruled over the Maldives in 1692. The large gated mansion behind the tomb is known as Muliaage.

Originally built in 1919 by Sultan Ibrahim Iskander I for his son, the building became government property in 1936 when the sultan was overthrown. Since then it has been used as both a government office complex and the presidential palace.

And to complete the historical tour, tourists can visit the grand Islamic Centre, which is located about 200m west of Muliaage. It is one of the largest mosques in South Asia and also houses an Islamic library and conference hall.

What to Do In Malé

After visiting the Islamic centre, visitors might enjoy a stroll in Rasrani Bageecha, also known as Sultan Park, which lies on the other side of the road. Housing some of the capital’s oldest trees, the park was once part of the grounds of the sultan’s palace.

From here, sightseers can enter the National Museum (accessed from Chandhanee Magu) to view important artefacts of Maldivian history such as ancient scrolls and garments worn by the royal family.

Sadly, no Buddhist artefacts are on display but the stamp collection is well worth a visit.

Upon exiting the museum, visitors can head down Chandhanee Magu towards the quayside Republic Square where they can spot the largest iteration of the Maldivian flag and observe the many locals who gather there to natter and people watch. Walking west along the harbour wall, visitors will soon come upon both the Fish Market and the Local Market.

Fishermen can be see unloading gargantuan yellowfin tuna here, alongside a variety of other more modestly sized species. The market offers a wide variety of locally produced products, such as fruit, vegetables, curry pastes, sweets and chutneys.

It’s also a great place to pick up a fresh coconut to quench your thirst as you wander around.

For those who’d prefer to lounge by the beach, there are two artificial beaches in Male’. The older of the two is situated on the eastern side of the island and is surrounded by cafés and ice-cream parlours and is a ten-minute walk from the airport jetty.

The other beach is known as Rasfannu Beach, is located on the west, behind IGMH hospital and is a short taxi ride away.

If a day in the city seems like too long, visitors can always hop on a ferry to Villingili from the western terminal (ask your taxi driver for Villingili Terminal). Ferries run every ten minutes and take ten minutes to get there.

A single ticket will set you back 3.25mrf (approximately 30 cents). This quiet island is technically the fifth ward of Male’ but is far more relaxed than the city.

There is only a handful of vehicles and there are many green spaces. The beaches on either side of the island are peaceful and on the western beach there is a large water sports hut offering everything from flyboarding to stand up paddle boarding.

Where to Eat In Malé

There are a number of great places to eat in Male’ offering a variety of different cuisines. If you’re heading to the capital early, then you’ll definitely want to try a local breakfast.

Many small local cafés offer Maldivian dishes of mashuni (tuna and coconut sambal) or kulhimas (curried tuna) served with freshly made roshi, which is an extremely thin chapatti. If you’re looking to sample a bit of everything alongside some European breakfast food, head to SeaHouse, which is located on the first floor above Hulumale’ Ferry Terminal, and try their morning buffet for around 10$.

For lunch, you might enjoy something a bit more familiar and Shell Beans on Boduthakurufaanu Magu, Seagulls on Chandhanee Magu and Breakwater at the artificial beach offer a mix of eastern and western cuisines.

Come 4 o’clock you’ll notice all the locals flooding the cafés for local afternoon snacks known as hedhika or shorts eats. These tasty fried and grilled finger foods resemble Indian samosas but have a completely distinct taste.

Their main ingredient is tuna (no surprise there) with either coconut, egg, cabbage or potato. They’re extremely moreish! Lemongrass on Fareedhee Magu and Citron in the carnival area (a short walk from Hulhumale’ Terminal) make some of the best hedhika in town.

If you’re a coffee connoisseur, then no doubt you’ll be on the lookout for a decent cup of joe. There are two lovely specialty coffee joints in Male’; The Civil Coffee Society on Fareedhee Magu and Meraki Coffee Roasters on Husnuheena Magu (behind the parliament building). Both offer fantastic coffee, a friendly atmosphere and the best pastries and cookies in town.

If you’re still around for dinner, you could head to Pizza Mia, on the same street as Meraki, for a really authentic pizza. Thai Wok on Ameer Ahmed Magu (opposite Traders hotel) offers good Thai food and Salt Café & Restaurant on Mohamed Ismail Didi Goalhi (near the fish market) offers a lovely view out to see from its 7th floor terrace.

What to Buy In Male

No day trip would be complete without buying a few souvenirs to take home with you! After picking up some sweet treats at the local market such as Addu bondi, a sugary coconut sweet wrapped in dried banana leaf, or Dhiyaa Hakuru, a honey-like syrup made from the toddy sap of palm trees, visitors can head to the Chandhanee Magu gift shops.

Here you’ll a mix of local and imported trinkets and keepsakes. The locally made items include the beautifully lacquered vases and pots known as malaafaiy as well as carved wooden manta rays and ornaments.

All the usual souvenir items can also be found – key rings, t-shirts, sarongs – but many of these are imported. Be ready to haggle over the prices, too.

Lastly, a word of warning – although these shops sell coral items and shark jaws, it is illegal to export these from the Maldives, so don’t be tempted to purchase them as they will be confiscated at the airport.

And finally, if you’re about to head on your island hopping travels, why not pop into STO supermarket (near Republic Square) to stock up on a few snacks?

This government-run supermarket stocks a great range of Ceylon and herbal teas, as well as Lindt and Milka chocolate, crisps, nuts and sweets. Elsewhere Fantasy supermarket on Fareedhee Magu stocks a range of goods imported from Australia, although these tend to be a little pricier.

Have you spent anytime in Malé?

About the author: Adele Verdier-Ali is the co-owner of Fulidhoo Dive & Water Sports, a 5* PADI Dive Centre in the local island of Fulidhoo in Vaavu Atoll. 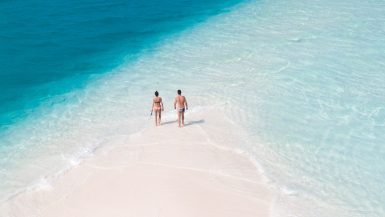 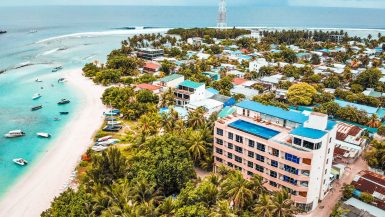 Maafushi Island – Your Complete Guide To The Local Maldives Island 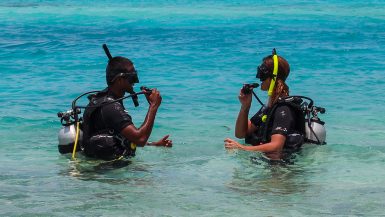 REVIEW: Learn to Scuba Dive in the Maldives with Fulidhoo Dive