Ok…so I’ve kept it schtum on the old Facebook and Twittering but the last few days of my Oz adventure have been rather eventful and stressful!

After deciding to leave Sydney a week ago I spent days tirelessly seraching the internet and hostel notice boards for a suitable campervan to be my home for the next year of my life!

The trials and tribulations of finding one deserve a blog of its very own (muchos advice will be shared!). But to cut a long story short it has been found!

Bondi Junction is the place, its been checked, test driven, muchos email bantering and phone calls to the father for second long distance opinions. But a deposit has been put down and Monday is the day that myself, Kerri and Kat finally leave Sydney.

Everyone knows that I’m a country boy at heart….so being stuck in a fairly large city was never really going to be that much of a joy for me. Don’t get me wrong, Sydney is a beautiful city (and my previous blogs prove that there’s alot to do and see), but I’ve been here over a month and it’s got to the point where I personally felt I was simply wasting my money looking for a job – I’d rather be by the beach and visiting new places :)

It’s been an experience, and the atmosphere over the festive period was amazing and I felt right at home (despite being further away from the beach than I would be in Devon!), the last few weeks everyone has seen alot of people depart for Melbourne or up the East Coast, and alot of that party vibe has gone with them, so the time has come to move on.

I am however sad to say goodbye to all the wonderful people I’ve met over the last month.

In true goon related style my last few days were consumed with partying and general carnage!

Saturday I met up with an Aussie dude I met at Glasto last year who has kindly offered me a free bed in Sydney, something I’m sure I will take up at a later day!

Gary and his rather intoxicated friend Andy (who’s a legend!) met us in the evening after a team 201 day out at Bondi beach (where muchos sunbathing, Irish girl meeting, rip current battling, body surfing, beer drinking and sushi eating was had – followed by a $6 treat at sidebar!). An straight away the drinking was on….cue a box of goon and bloody marys in 201. Best it goes down the word blurb route me thinks!

bamboo tattoos, ladder clilmbing, tails of thailand, OMG sarah, OMG i cant do it, ring her, dont ring her, random chuckles, sculling beers, sculling goon, kez getting rather tipsy, train to kings cross, bunking through the barriers, andy trying to slide down the escalator, his crotch hitting the metal lumps, muchos laughing, him trying it on the bigger one, photographing him whilst gary saved him, trying to stand upright, security, burlesque masks, blagging the conductor, bunking through barriers at kings cross, kerri getting her leg squished, finding house parties, random aussies, tequile, more goon, beers, roof top banter, wandering into town, getting lost, shopping trollies, kerris circle of trust, andy passing out on the road, play fighting, tree hiding, mcdonalds 50cent ice creams, loosing everyone, bunking the train back home, suddenly realising its 3am, hungry jacks, crashing out.

Needless to say the whole of 201 was pretty out of action until 1pm the next day….we all shared the hungover pain, group bonding n all!hahaha!

The remainder of the day was taken up with strolls to the opera house, campervan shopping, $10 roast dinners, waynes world 2 and cheeky pints.

Then despite everyones better judgement, more pints, live bands, pizza and a session in scruffy murphys.

A great last weekend in a great city where I’ve made some great friends and had great fun. 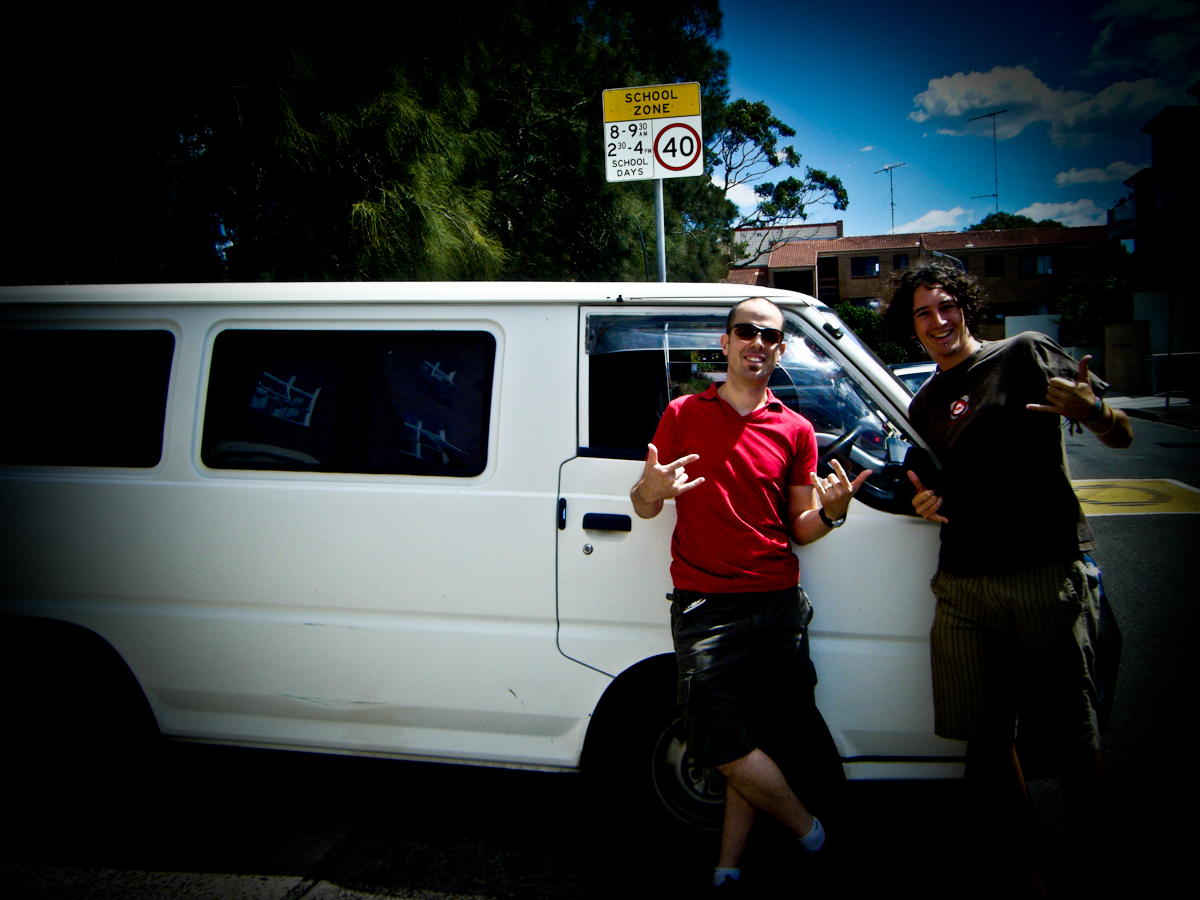 Next →
Roadtrip and Campervan Advice