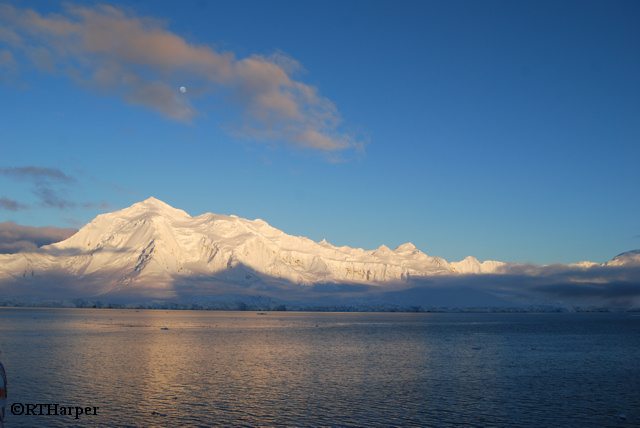 Antarctica, the last great wilderness, has been the source of fascination for mariners, explorers, scientists and naturalists since it was first discovered. Ross, Scott, Shackleton and Amundsen are just a few of those who dedicated their lives to exploring the continent, and when I got the chance to follow in their footsteps I jumped at the opportunity – the more I found out the more fascinated I became, and the keener I was to experience why they kept returning south.

I flew to the southern Argentinean port of Ushuaia, the world’s most southerly city and the departure point for 90% of all ships going to Antarctica. The city is beautifully situated on the Beagle Channel and has many attractions itself.

I had a couple of days here before my ship – the M/S Expedition – set sail. I used the time to visit Tierra del Fuego National Park, which has many hiking trails through coastal woodland and the following day I made a day trip to Isla Martillo, about two hours drive and a short boat trip from Ushuaia, which has a breeding colony of Magellanic Penguins, plus a few Gentoo Penguins.

I don’t think you can ever see too many penguins, but this was just a taste of things to come!

Boarding the ship brought a mixture of trepidation and excitement. Excitement for the experience ahead, but nervous about the next two days crossing the infamous Drake Passage. I needn’t have worried, crossing the Drake was very smooth, and although a few of my fellow travellers were ill, most of us made it for breakfast each day.

The best place to be during the crossing was on deck- the weather was clear and there was a surprising amount to see.

A wandering albatross followed the ship almost all the way from Argentina to Antarctica, and there were plenty of other along side it, as well as petrels and other seabirds. Fortunately there were experts on hand to identify these for us.

As we were approaching land after two days at sea an announcement came over the PA system that whales had been spotted. If there’s anything that can rouse people from their cabins and get them on deck it’s the chance to spot a whale.

Sure enough, just ahead I saw a spout of water, then another, and there was a group of half a dozen Fin and Sei whales close to the ship – a magical sight.

Then came the penguins. Before sighting land, a group of Chinstrap penguins came towards us, leaping out of the water as if to welcome us to Antarctica. It also meant the Drake crossing was nearly over and it wouldn’t be long until I could set foot on Antarctic soil.

The first landing was on tiny Barrientos Island in the South Shetland group. Being the most northerly part of Antarctica it was relatively warm and green, not the icy, rocky landscape I was expecting. The greenery was moss and lichen- there are only two species of flowering plants on the whole continent.

And there were penguins everywhere. Gentoo and chinstrap penguins both breed on the island, along with the neighbouring seals.

To avoid congestion in the mud room, where we got ready for our landings, we were split into four groups. The groups were named after the great Antarctic explorers, Scott, Shackleton, Ross, and Amundsen. I was in Scott group. He is most famous for not returning from the South Pole – but I hoped this wasn’t an omen!

We sailed on south from Barrientos Island across the Bransfield Straight to the Antarctic Peninsula and the continent proper. This is where we started seeing the icy landscapes Shackleton describes. Glaciers reaching to the sea and massive icebergs, bigger than houses, which have caught many a ship unprepared littered the landscape.

Our one continental landing was at Neko Harbour, where, among the Gentoo penguins and skuas, I could finally say I have set foot on all seven continents.

We made seven landings in total, all except the one at Neko Harbour on small islands.

Each island has its own distinctive character and different wildlife. We reached as far south as Petermann Island at 65°10’ south, which is only about 80 miles north of the Antarctic circle.

The highlights of the trip for me were the landings at Port Lockroy and Deception Island. Port Lockroy is the site of a former British research base, which is now run by volunteers as a museum and gift shop, as well as the British Antarctic Territory post office – which gets surprisingly busy with everyone keen to send a postcard home.

We landed at Port Lockroy early in the morning after some quite heavy overnight snow, but the sky had cleared and we had our best weather of the cruise. Seeing penguins (for a change!) and cormorants against a backdrop of snow covered mountains and blue sky was just magical.

Deception Island is a volcanic caldera, which has an opening at the south east allowing ships to sail inside. Being volcanic, the sea at is supposed to be warmed a trifle, so this was our opportunity to go for a swim.

A surprisingly large number of us decided to do so, although “swim” is being somewhat generous – it felt pretty cold to me, so no sooner was I in than I got out as quickly as possible! Unfortunately that was the final landing on Antarctic soil, but a fitting end.

As we were sailing away we spotted a last colony of chinstrap penguins and the clouds lifted for a glorious farewell to the most incredible adventure to a place I’ve dreamed of for years.

GAP Adventures 11 and 13 day Antarctica Classic cruises have various departure dates for the 2011/12 season starting at £2859.

The day trip to Isla Martillo from Ushuaia was £50.

*Article and images courtesy of Roger Harper – travel guru for myself at STA Travel who loves to explore the world and experience the unique. His trip to Antarctica meant he has now visited all 7 of the worlds continents – hopefully he’ll be sending some more banter our way soon!*