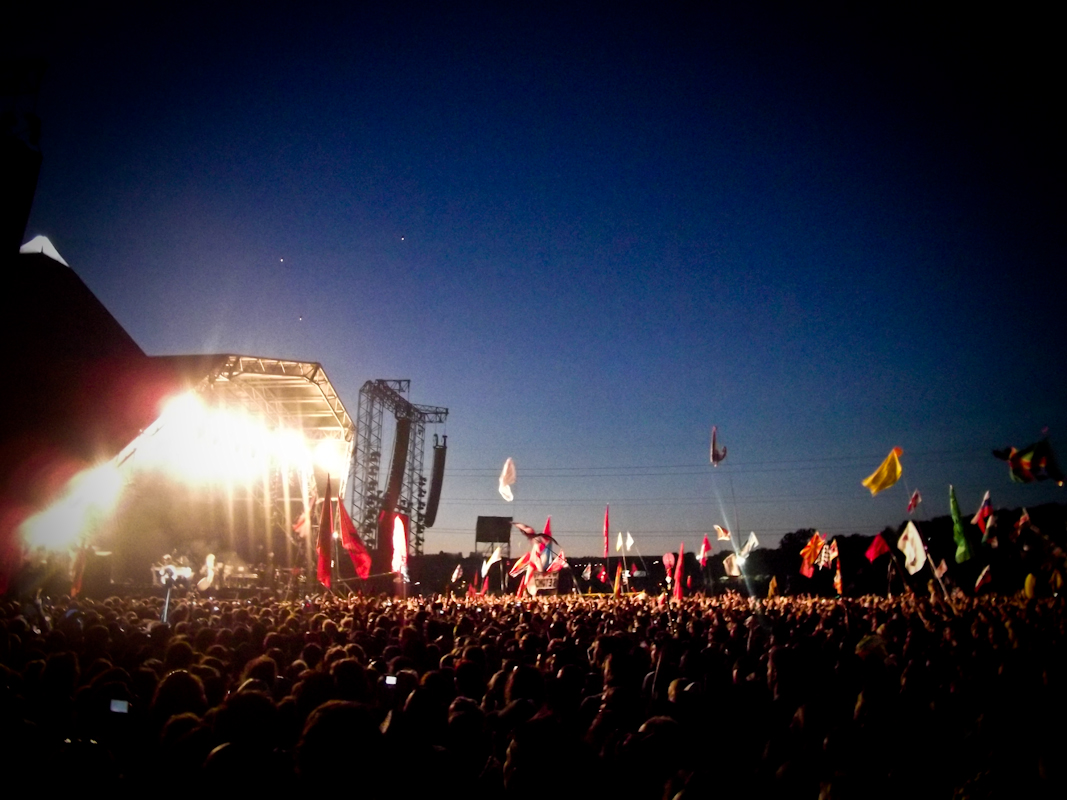 If you read this blog regularly you’ll know that I’ve just about recovered from my latest festival exploit at the world famous Glastonbury Festival. I’ve been going for a number of years now (including one epic year where I scored a VIP Press Pass which resulted in some serious awesome times with celebs and free bars!) and I can safely say it’s the highlight of my summer. So putting the bias aside here’s my festival review of it…

Even now, with a number of Glasto bands on my wrists the first impressions of wandering into the festival site are still the same – “wow this is bloody big”!

But the Glasto experience doesn’t start on site – it starts months before when you register, upload your photo and continuously hit refresh on your internet browser repeatedly to get a ticket – Glastonbury takes over your life for a considerable period of time and needs to be planned well!

It’s a massive festival where you can mingle with 180,000 other music fans of all ages, nationalities and varying degrees of intoxication. With this volume of people though it is inevitable that being in a que will form some part of your experience – from the initial trail of traffic entering the site (which can last 8 hours plus if you time it wrong!) through to swopping your ticket for the hallowed wrist band. It’s all good fun though and

a good excuse to chill out a start on a few cold ciders.

The site itself covers well over 900 acres, takes well over an hour to walk from from one end to the other, houses over 50 stages and literally showcases 100’s of live acts. It’s like nothing else you’ll ever experience.

And it’s not just for young drunken music lovers, nope Glasto is much more than that. Here you can find everything from the Kidz Field and Family camp ground through to the Healing Fields and Greenpeace area – there literally is something for everyone.

During the day it oozes creativity and is a great time to explore the numerous areas and do a spot of shopping where you can buy anything from circus equipment to organic hemp clothing and by night it’s alive with headline acts before descending into organised chaos in areas such as Shangri La or Block 9 which go into the early hours of the morning in a apocalyptic set more suited to a Hollywood blockbuster than a festival.

And don’t forget the mud – it’s an essential part of any Glasto – mud diving and torrential rain are the backbone to any successful Glastonbury experience…don’t let it put you off!

One of the main draws as a music festival is the bands though, and on this front Glastonbury is a pioneer and caters for every taste. Stages such as The Rabbit Hole or the BBC Introducing give a voice to lesser known bands who more often than not are the next big thing, smaller stages such as The Bimble Inn host intimate acoustic sets (often with secret guests) whilst the Pyramid Stage and Other Stage host household names such as U2, Muse and Groove Armada.

Lately Glasto has been diversifying it’s musical tastes even further – with controversial headliner Jay-Z topping the bill in 2008 and his missus Beyonce closing the festival in 2011.

The bottom line with Glasto is that no matter what your age, background or musical taste there’s something going on that will keep you entertained. Whether your a hardcore music fan or an eco warrior and everything in between. The tickets may seem slightly expensive at £195 – but this includes 4 solid says of music, full camping and access to heaps of other stuff. For me it represents excellent value for money, especially considering a one off ticket for one of the headline acts would set you back the best part of £40.

Unfortunately 2012 is a lay year for Mr Eavis’s farm – but that gives you plenty of time to prepare, register and grab a crew of friends along for the ride

If you’re a Glasto virgin why not check out this review by Kerri – which documents her first ever Glastonbury experience… (she also kindly donated the featured image for this review too.)