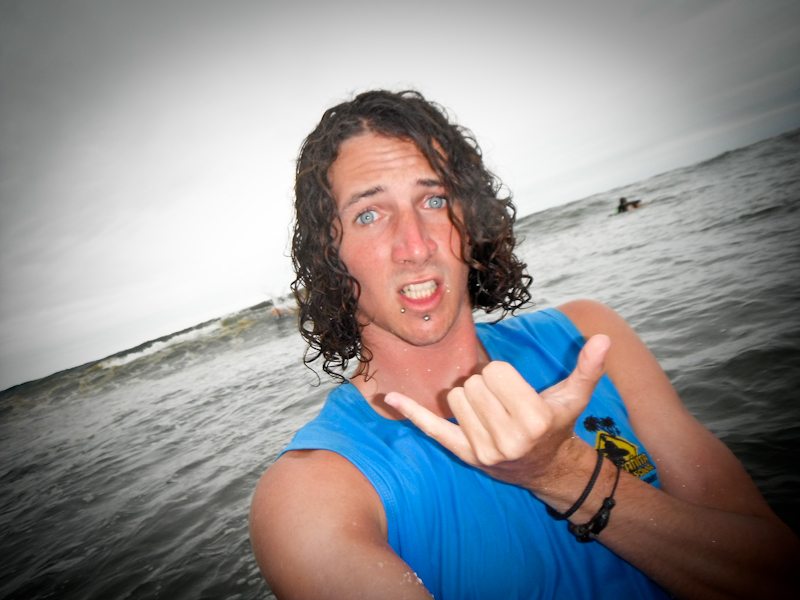 Every action in life has an opposite and equal reaction. You can call it many things – fate, karma, ying and yang. It’s how the world works.

So it was pretty inevitable that with my epic dream job there would be some downsides too. Sunburn from spending the entire day in the sun. Dehydration from all the partying in the evening.

…but spending so much time in the water also put me in the firing line with all the lovely aquatic life that inhabits the coastline of this lovely country. And a few of them aren’t too happy to have me treading around in their house!

Over the last 2 weeks I’ve had a couple of students pick up a few injuries – the odd tweaked ankle, some fins to the leg (and even one to the head – remember guys keep your head covered!) but also some more natural dangers.

The first was a jellyfish. I encountered these little buggers in Oz. Not fun. Luckily for the girl involved it was only a light sting and she didn’t get tangled up – so no one had to pee on her arm!

The second was a stingray – Steve Irwin styleeeey!

I’ve not really had to deal with these before but from what I understood stings were pretty rare and on par with the British Weaver fish. Those little buggers sit in the sand with 3 spines protruding. I’ve been tagged once and it wasn’t too bad.

Stingrays on the other hand react to being stood on with a quick whip of their tail which happens to have a nice poisonous barb on it.

Unfortunately the stingray decided to defend itself against the same girl who had been stung by the jellyfish…the day after!

After cleaning down the puncture wound we took her to the clinic who sorted her out and advised her to head to the hospital if the pain travelled up her leg. Travelled?! Ok so maybe stingrays are a bit more hardcore than I first thought!

Then my intern buddy Leah got hit on the surf trip – and it was clear from her reaction that it was pretty painful. But still my sympathy was reasonably limited base don my own weaver sting.

Ok so 2 stings in the space of a week. Pretty rare according to fellow instructor Luis who has lived here all his life and only taken 2 hits himself.

I still wasn’t too worried – based on Luis my odds of getting stung weren’t too high, and if I was going to worry about stuff like that I’d never have any fun in the sea! It was the same with Oz – I refused to worry about any of the men in grey suits (despite spotting a few whilst in the lineup) because I’d rather base my fears on statistics!

Seems even the best statistics have some pretty painful anomalies…

I was out teaching the lovely Kiki and Becca to surf over at Olon beach and agreed to take along the waterproof camera and get some shots for their Facebook and what not – all was going good, the girls were catching some good waves and I was capturing the evidence.

But it was low tide, I’d been wading around in chest deep water for a while and I took one step too many.

I felt a nice jabbing feeling into my right foot and a rather squishy object under it.

Needless to say my instant reaction was to jump onto my other foot and away from said object.

In a rather twisted and cruel turn of fate my other foot landed on the other side of the creature who was intent on ruining my day.

A hit in my other foot.

Now the instant pain wasn’t too bad. It was similar to standing on a sharp rock.

After watching the others get stung realised that this was merely the beginning, so I got out of the water ASAP and headed straight for the surf truck. By the time I sat down in the back both feet were beginning to throb.

And it got worse.

Within about 10 minutes the pain was full on – it was like have massive cramps in my feet – but without any sign of relief or being able to find a comfortable position for them. It freaking hurt heaps!

Now the treatment for a stingray hit is to immerse your foot in near boiling water asap. The science behind this is the fact the poison is protein based, and the heat breaks this down and thus eases the pain.

However I was in Ecuador – where hot water is about as reliable as Backpacker Becki having a sober night with no bad decisions, and I was also stuck on the beach.

So the surfing field treatment is hot wax. Yup – I sat in the back of the truck whilst the girls took great pleasure in burning a candle and dripping hot wax on my feet!

To be honest though it seemed to work. Although the pain was still intense, it never travelled and I recovered alot quicker than the other two cases I’d seen.

I was still pretty chair bound for a good few hours though – but I played the sympathy card to it’s full potential and I boosted my treatment with some strong mojitos! Still wlaking back into the office I was greeted by a very smiley Gijs (who I’ve been mocking about his job v my job) and while he did his happy dance the first thing he said to me was “nothing tried to kill me in my office”!

And a Quick Update…

It seems I’m destined to be plauged by these little buggers though – because a week later I found myself writhing round in the sand during a surf lesson with yet another bleeding puncture wound in my foot.

And the entire Spanish School Staff are now referring to me as Senor Stingray!

I suppose this is the world balancing everything out – seeing as I do have my dream job and I spend all day surfing in the sun!

Sometimes paradise can have a few dangers – stay safe in the water kids, but don’t let me my bad luck put you off surfing or enjoying the ocean, I’ll take one for the team!

…and for now it’s back to doing the “stingray shuffle” while I work!