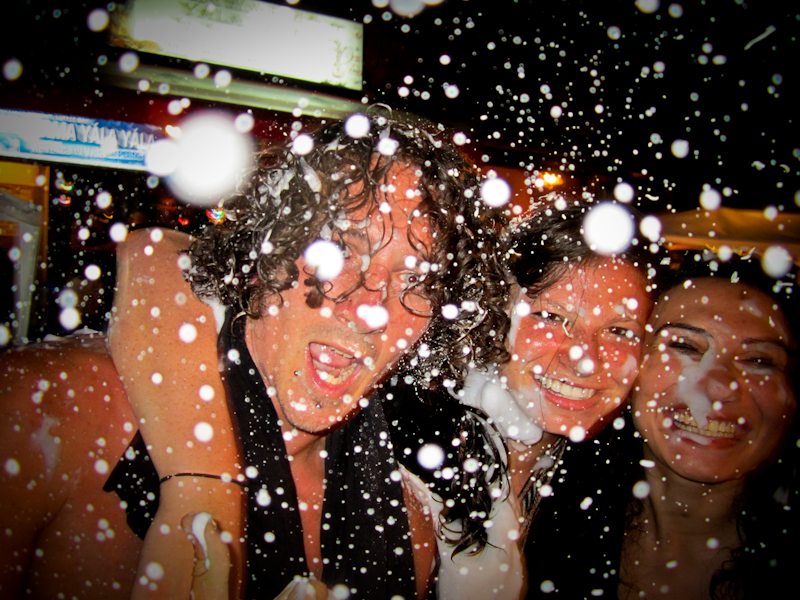 The last 4 days of my life are a pretty hazy blur, a series of fleeting moments being pieced together through photos and stories from other peoples equally patchy memories.

The reason behind this chaos? Not just some crazy backpacker weekend – but the 4 day holiday that consumes the whole of South America – CARNAVAL!

The carnival – made infamous through the Rio version actually takes over the whole continent. Everything comes to a grinding hault with a 4 day public holiday running Friday through to Tuesday.

This means everyone sets out to get as loose as possible. Like crazy loose!

Living in the beach town of Montanita meant any kind of party was always going to be amplified as the city masses head to the coast for some sun, fun and muchos cervesa. The traffic in the town became a free for all with tail back all over the place – the 10min drive to Olon beach, one bay along, became a 2hour nose to tail traffic jam.

Everyone seemed intent on getting messed up and making bad decisions too…it was going to a be a good one!

I’m sure that you’re aware of the fact one of the key ingredients to prolonged partying is good company. Get the right crowd, with the right energy and you’re in it for the long haul – and that’s exactly what happened.

Team up a brit, 2 yanks and 2 aussies for the first 2 nights of chaos and you have the recipe for epic beach dancing, a whole heap of mojitos and 6am walks home.

The usual busyness of cocktail was far surpassed – and the beach…well the beach was shore to town packed out with drunken revellers, occasionally interupted by the heaps of people sleep/passed out/copulating on the floor!

The Aussie chics fuelled the fire with their absolute disregard for self control and it didn’t take much to drag the rest of us along for the ride!

The return of Gijs on Sunday meant the group grew – and we added the bulk of the cabana residents to the crew, so the Dutch, Swiss, Swedish joined the madness. After a lush evening surf and a few evening beers in the sun Canja Grillbecame the venue of choice and a masquerade ball was the theme of the night.

I managed the credit of last man standing – out dancing the rest of my drunken buddies by a good few hours. A few hours that involved salsa and being fed copious amounts of beer by a lovely Ecuadorian girl.

My quiet, usually sobering walk along the beach to home still hideously hindered by literally thousands of people and beach fires!

Monday stepped the whole thing up a notch. After a stupid o’clock return the night before (well actually it was well into the same day!) I was woken up with a freshly cooked toastie by Leah who literally fed it to me in a half concious state without even opening my eyes!

She then asked if I wanted a Jack and Coke. Obviously my answer was no.

Then she asked if I’d drink one if she made it.

Obviously the answer was yes!

…it would be rude to turn down such hospitality!

So within 15mins of waking up I was back on the party wagon and headed straight to the pool.

Me and Gijs then made it our mission to get a pool party on the go. We started by cracking out the rum (standard!) and getting a few down us. We then proceeded to pick up EVERY sunbather in the vicinity and throw them in the pool – whether they wanted to co-operated, were dressed for a swim or not!

Needless to say that got things off to a good start and soon there was a good crowd soaking up the sun, sculling ice cold bevvies and enjoying life.

As people sat down in the common area we continued to throw new bodies into the mix!

Our Cabana manager didn’t escape either and I personally chased our legendary security guard Antonio down the road before returning with him on my shoulder and jumping into the pool with him shouting at me in Spanish!

And Enter the Night…

And of course you have to finish an awesome day of sun and fun with a night of equal measure.

Me, Gijs and Leah undertook the 30 minute beach walk to Mungaralto (highly intoxicated and with a few so called road beers) for a meal with the director of the school we work at.

Luckily Karen is a good chuckle and was fully expecting our current state.

Now the other thing about carnaval is that everyone sells foam in a can and carries water pistols…making a messy situation heaps messier.

So when me and Gijs headed on the booze run for the meal we came back armed with supplies – but not until we emptied a full can on onto the lady that sold it to us!

And of course as soon as Karen opened the door we hosed her down too!

After finally getting some much needed home cooking inside of us we headed into town. Unfortunately a walk into town in our state wasn’t the easiest or most simple decision. We bumped into April and her bloke who covered us in foam – so we retaliated.

What’s even better though is a group of kids about 20 strong saw us hose down April – so when she walked past them they followed suit!

At one point the poor girl was surrounded, curled up in a ball on the floor whilst a group of under tens emptied can after can onto her – she even took a couple of eggs in the mix! EPIC!

In a brilliant sadistic turn of fate we also discovered fellow surf instructor Luis asleep in a hammock too…needless to say he had a rude awakening and was dragged along for the ride.

And it would just be plain rude not to get the troublesome twosome that is the Aussie girls into the mix – foam hose down now fully obligatory!

All being far too lazy to walk back we opted for the cab option. Me, the aussies and Leah we faltering behind slightly though so we missed the ride – but it seems hitch hiking with 3 girls makes life pretty easy and it wasn’t long until 3 thumbs attached to 3 beautiful ladies landed us a ride!

…in the worlds most full and rickety car! The doors didn’t work and there was all ready 3 people sat in the front of it – so after playing human tetris I found myself lying down across the girls in the back. Fun times indeed!

The rest of the night pretty much followed suit – cocktail alley was where we all managed to regroup and everyone got seriously loose! By this time 12 hours of drinking were beginning to take it toll and there are ALOT of pictures that will hopefully not see the light of day or make it onto Facebook!

There was sharking, dancing, cocktails, dancing, photo bombing, drink swopping (quite literally fountains of mojito passing from one mouth to another!) and heaps of bad decisions. Some of which on my part that shall not be discussed, merely hinted at, due to the fact my mother still reads my blog!

Thank god I managed to survive it all!

Make sure you put this epic South American public holiday on your bucket list!