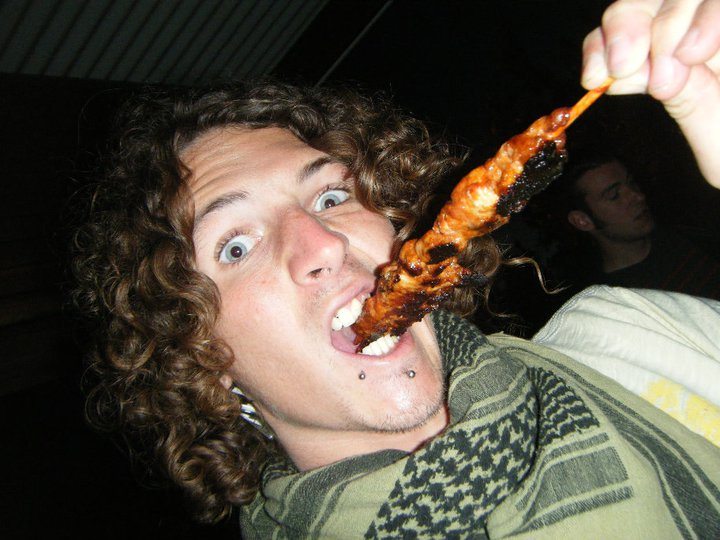 Bugs, Fish Heads and Pasties – Why I Love Travel and Food

A fellow backpacker asked me a question the other day; what’s the weirdest thing that you’ve ever eaten on your travels?

The questions caught me slightly off guard and made me rack my brain heaps. I’ve always stood by the fact one of the great joys of exploring the world and experiencing new cultures is the cuisine that comes alongside it.

It can make or break a travel experience for me.

Home is where the heart is

At home I’m stoked to come from the county that created the pasty – Devon. I know that the Cornish amongst you will scream blue murder over that fact and others will be puzzled but there’s heaps of evidence that it was in fact created in Devon, although admittedly the Cornish make a heaps good steak pasty and have placed it firmly on the map.

Living in the countryside also affords me all manner of good cuisine, from free range chicken through to fresh rabbit and pheasant all locally sourced and traditionally prepared. And don’t even get me started on the heaps of amazing seafood line caught from the coastline I surf – nothing can beat a freshly made fish and crab cake from Squires in Braunton!

This passion for food, both of good quality and intrigue follows me around the world and has produced some rather odd and intriguing experiences.

I’ve never been one to shy away from trying something new and I’m a sucker for a good bit of peer pressure, both if which have meant I’ve eaten some rather odd things and jumped in without much consideration, so here’s some of my stand out exotic munchies;

For me personally my time in Asia has produced both the best and worst cuisine of my travels.

Thai food is a definite favourite – with amazing Pad Thai as a standard dish during my time here. But a spicy and fresh papaya salad or a coconut curry always go down a treat, there’s just such a great variety of dished suiting every mood, and if you head to the local markets it comes at an exceptionally cheap price, gotta love Thailand!

Laos on the other hand was possibly the blandest and boring county cuisine wise. The ex French colony has adopted the baguette as its meal of choice apparently. But they’re over priced and taste rubbish! Its even managed to mess up the food from its other Asian neighbours! The only saving grace to my palate in Laos was the traditional meal of Laap (minced chicken in a salads with chili, lime and mint) from Utopia Bar in Luang Prabang, everything else sucked!

I also have to give a massive shout out to the culinary skills of Morocco too, as a hearty slow cooked Tagine is definitely one of my favourite ways to indulge post surf – it’s also one of the nicest ways to present food and share a communal meal.

…and I couldn’t have a post about food on the road without mentioning BBQ’s either – I can’t think of a better way to spend an evening than firing up the barbie, cracking open some cold beers and enjoying some good food with heaps of good company. For me the the BBQ is a great way to get people together, especially when it’s by the beach or cooking up some fish you caught earlier in the day!

What’s the best and worst food you guys have encountered on your travels? Anything on your to eat list or anything I should add to mine?!