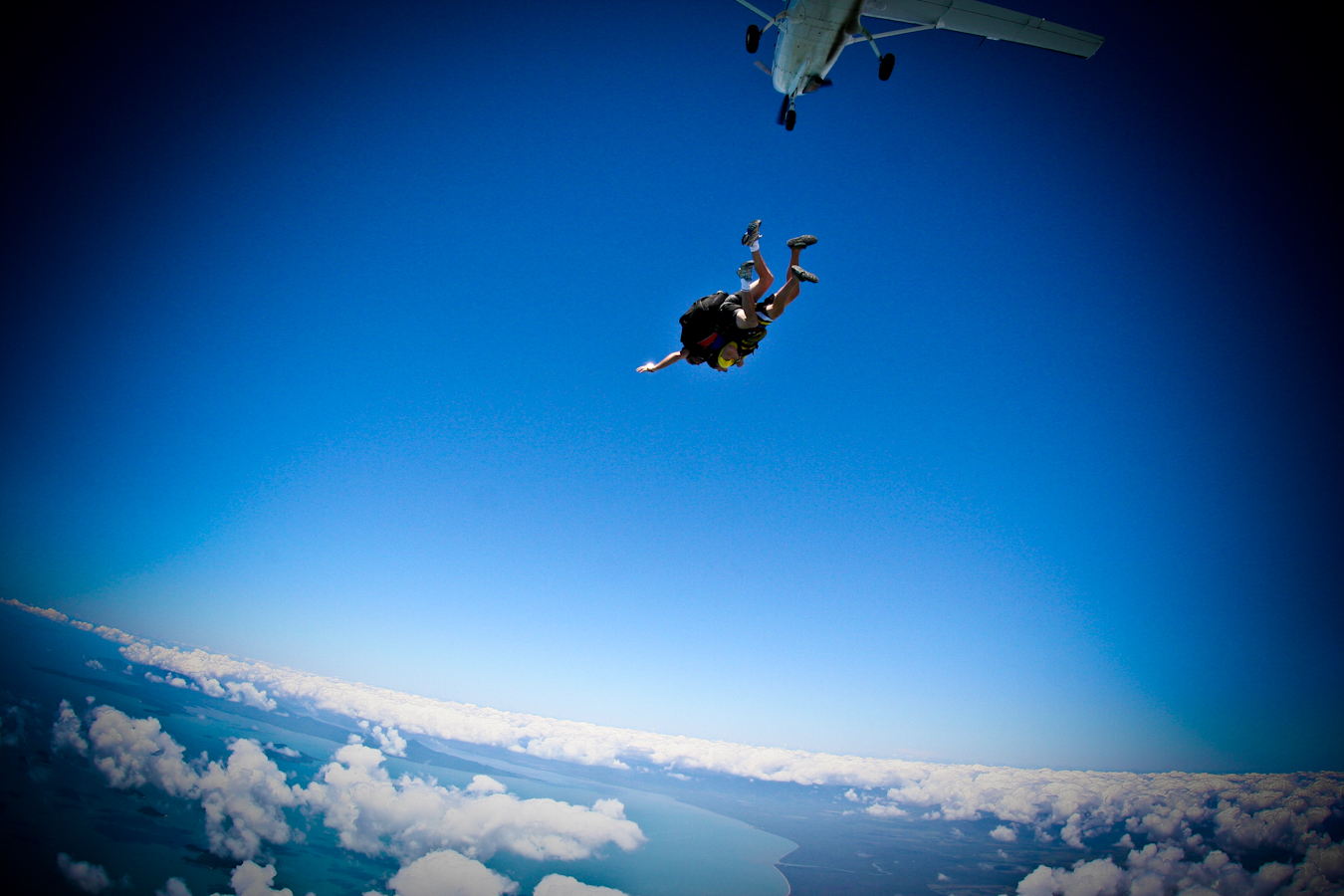 Ok so last night i was walking along the esplanade and bumped into a few of the guys from my hostel. Got chatting and they said they’d just booked a skydive, which they were all pretty stoked about.

Now skydiving has been on my list of things to do, not overly high up….more cos i think its the kinda things to do before you die experience…so when they invited me along I decided I couldnt really pass up the opportunity (although there was a bit or umming and arrring due to the price – i’d also seen a really nice didge that i wanted to buy!!)

So it was booked.

14000 feet + DVD + Pics + a whole load of adrenaline (which my trip i severely lacking due to there being no surf in Cairns!)

So i was up at 7am the next morning with a bus full of sleepy travellers to mission beach, about an hour down the road. needless to say everyone slept for the whole journey!

this did however mean that when we arrived and i was picked to jump first it took a while to register what i was actually about to do – i’d paid good money to jump out of a perfectly good plane, despite my better judgement and a distinct fear of heights!!!!!!!

Luckily the tiredness probably meant my nerves were masked!hahaha!

so we were harnessed up by our instructors (brandon was my dude for the day) and sat down to learn ‘how to skydive’. 5mins later we were heading for the plane!

My videographer/photographer for the day was Julian, we had a good chat about cameras and such like and how envious i was of his job, inbetween doing a few set pieces for my DVD which you will all no doubt get to see.

After 8 of us loaded into a tiny little aeroplane we set off, i was right next to the jump door, which was open for the majority of the take off….not something which helped my ever increasing nerves. Despite the bouncy ride the view was fantastic, 360degree panoramic views over the rainforest, white beaches and the barrier reef. It was lush.

Then we hit 7000 feet and one of the solo divers sat on the edge and jumped. This is when it hit everyone in the cabin. Watching the guy fast descend into a tiny blob beneath us made it completly hit home. I looked around and luckily it seemed everyone had the same look of apprehension as i felt i did. But we were only halfway to our height :S

2miles before the dropzone the red light lit up. next was the amber light….1mile til drop. then the door was open and the green light was on. Before we knew what was happening the first jumper had gone. Then Julian climbed onto the side of the plane and Brandon was moving me towards the door….i looked down and was completly bricking it! Luckily Brandon didnt keep me in too much suspense and we quickly followed Julians descent.

The next 60secs of my life were pretty mental…..hurtling towards the ground at terminal velocity, spinning and feeling the rush of the air was AMAZING. I cant really describe it well, its just something you need to do. My adrenaline was in overdrive and I’d got the kick i needed.

60secs doesnt sound like long but it sure feels it when your heading toward the ground. Julian gave me a wave which signaled the next part of the dive, our shoot opened (all be it rather tangled and dubiously!) and we shot up into the air as Julian disappeared into the distance.

The parachuting was equally lush in a different way….my heart was still pounding and my adrenaline was kept high by Brandons love of steep turns….which produced some incredible G Force. I got to appreciate the view again before heading to the beach to land.

I spent the next few hours chilling on the beach, watching everyone else in the group jump, bantering about what had just happened and generally just being uber stoked :)

Defo something I would recommend…..cant wait to repeat it in NZ in a few years with the little bro :)