Why I fell in Love with Noosa

So the 2010 Noosa Longboarding Festival is now all wrapped up; it’s lived up to the promised “8 days of pure stoke” that the organizers promised.

We’ve had cyclone warnings, pumping swells, thunderstorms, beaming sunshine, reeling point breaks and some of the best longboarders in the world doing what they do best – including the final of the Golden Breed Noserider challenge, with some serious tip time despite the not so perfect conditions on that day.

But it’s not the competition that has made me catch the Noosa bug (lets face it I spent more time in the water than actually watching the surfers!) – it’s the people I’ve met and the place itself.

Noosa lived up to its reputation this week. I saw it at a consistent best. Mechanical lines, hollow sections, and epically long rides firing off at pretty much every break conceivable. And 90% of the surfers in the water were ripping it up on 9 foot plus, with the old school grace and style that I can only dream of achieving.

And yes the combination of the festival and the swell meant there were crowds in the lineup – especially considering First Point was off limits.

But the lineup in Noosa oozed the charm of a laid back surf mecca. It had none of the tension I’ve found amongst other surfing communities.

Usually if you get to a break of this calibre and it’s breaking this well there’s always some tension in the water from the locals. Not necessarily hostility, but unspoken tension.

Take Newquay for instance – now picture it during summer, or worse still the Boardmasters festival, now add in picture perfect conditions on a weekend. Now paddle into the pack.

The result would be chaos in the water and more than a few angry words at the drop in!

Not so much in Noosa. I didn’t feel out of place, or like I was being eyed up as another grockle. It just didn’t happen! In fact I had some very lengthy chats with complete strangers in between sets!

There may be a few reasons for that; perhaps the conditions themselves? It was after all firing off, there were some pretty hefty rips so you had to be pretty confident to get out back – maybe it was a mutual respect of competence?

Maybe it was due to the number of sections – there were numerous stops you could take off in.

But I think it was mainly the Noosa vibe in full force.

The underlying feeling of being relaxed, patient and simply enjoying the moment for what it was.

Sure I had to wait for waves – but I didn’t feel like I was being ‘bullied’ off them, and I saw very few people get burnt. But I enjoyed watching when I wasn’t actually in a spot waiting to paddle in. Sitting in the lineup and waiting for your turn was like being in your own personal surf movie.

Why wouldn’t anyone living or surfing in Noosa feel laid back – we had an abundance of waves, lush weather and a picturesque backdrop of National Parks.

The locals I’ve met are a testament to this way of life. The stand outs are obvious Tom Wegener and Matt – who extended their hospitality and always took the time to say hi and have a chat, whether on land or in the water.

Then there was Cameron, who I met through Tom. There’s a shot of him riding that massive log in the Alaia blog; I caught up with him throughout the week, bumping into him during a morning coffee and being introduced to his wife and children, but also in the lineup – where he was keen to pass on his knowledge of the break and saved a few waves for me – which I’m incredibly grateful for!

If you want to party and have surfing as a sideline go to Byron.

If you want to live the surfing lifestyle – eat sleep and drink it – and surf some of the most picturesque and high quality breaks I’ve seen in Oz, then Noosa is for you.

A surfing town which welcomes people from all corners of the world and will even share a wave or two!

Noosa keeps the original stoke it was founded upon and refuses to be tarnished by modern day, commercial surf culture. I hope it stays this way and that surfers can pass on a piece of its lifestyle when they continue on their journey – but it should be a planned stop on anyones Oz adventure, whether you surf or not, you’ll leave better for it. 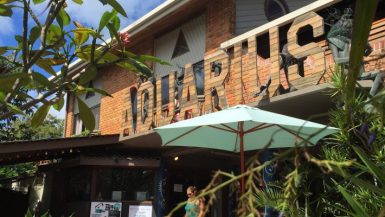