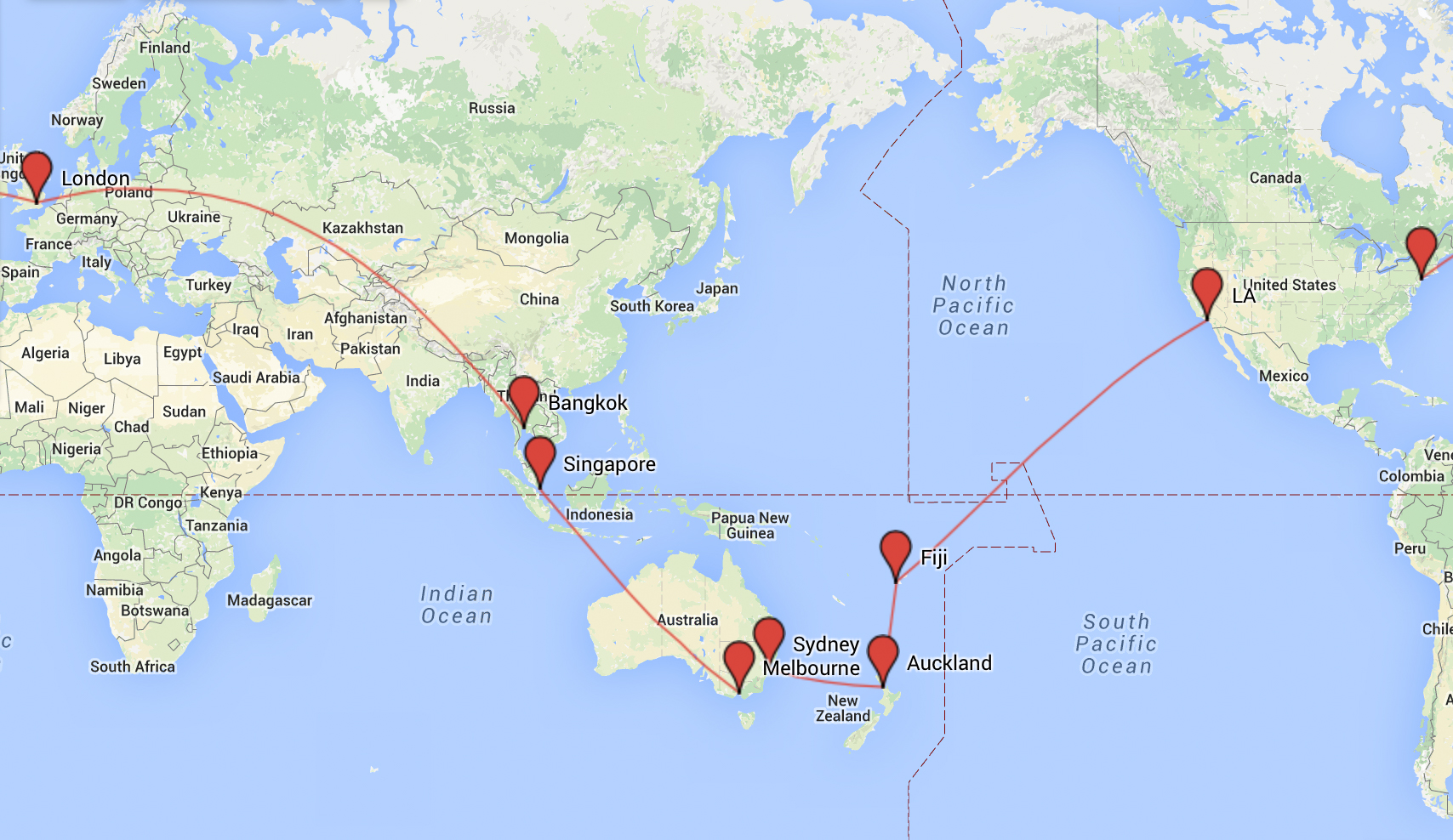 Looking for some gap year routes to help start planning your next round the world adventure? Here are 7 of my favourite flight paths to help inspire you!

Planning your gap year can be a bit of a stressful process – the world is a big place and narrowing down the best gap year routes for you can take a lot of planning!

Having worked in the tourism industry for a number of year with the likes of STA Travel I’ve sent numerous people around the world – so it’s fair to say that I’ve seen a few weird and wacky  itineraries and gap year routes put in front of me…there are so many round the world flights to choose from!

Some range from the down right impossible right through to adventurous and enlightening.

If you’re looking for some inspiration to start planning your around the world trip then look no further – I’ve put together my top gap year routes to show you what is possible.

They’ve been picked from real bookings and showcase top places to visit and heaps of exciting things to do along the way – so grab a pen and start making notes!

Just keep in mind there are limitless ways of piecing together your trip so use one of the following or pick your favourite stops and put together a custom trip!

Also as a quick tip for planning your gap year routes, did you know you can do an “open jaw” ticket?

This is a ticket that flies into one destination, but out of another – so you can overland in between two destinations or bounce around.

A great example of this is flying into Sydney and out of Cairns to travel the East Coast of Australia or into Bangkok and out of Singapore so you can bounce around South East Asia! These are represented by the // in each itinerary

My Top Round The World Gap Year Routes 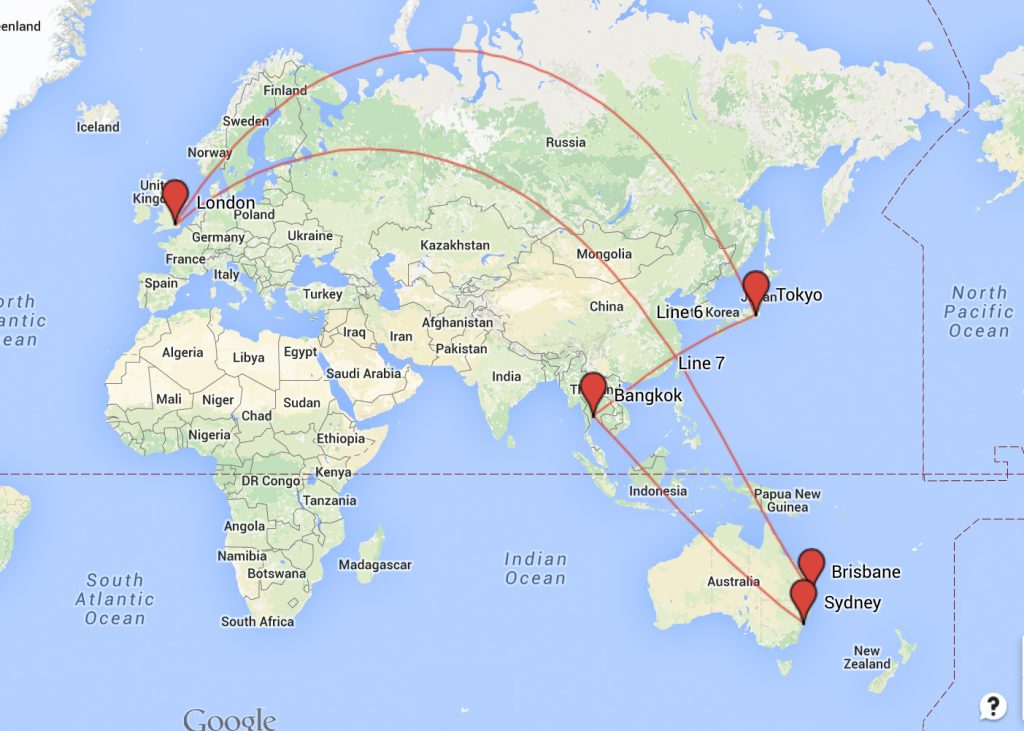 Head to the centre of the east coast and travel south throught the Gold Coast and Byron Bay down to the iconic opera house in Sydney via Bryon Bay.

After that you’re Asia bounce to Bangkok where you can overland through the Thai Islands or loop around through Vietnam, Cambodia and Laos. Then hit tech central in Tokyo and the surrounding countryside for an epic contrast filled with and hustle and bustle. 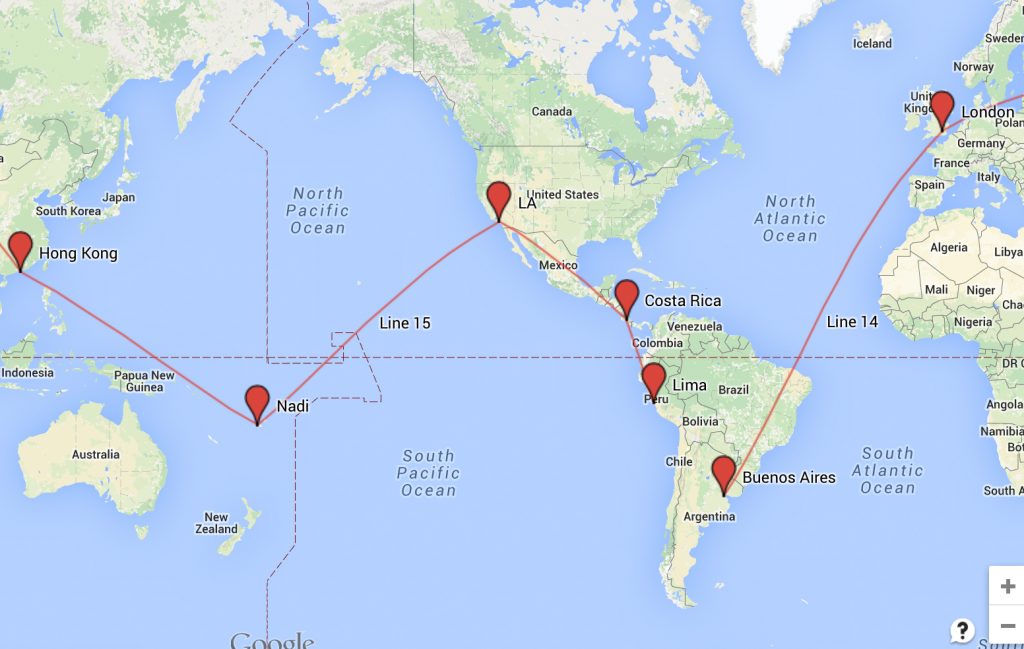 Hit the infamous carnival in Rio before cutting across the heart of Brazil and the Amazon jungle. After exploring Peru and the south coast of Ecuador jump into Costa Rica and central american beach life.

Then enjoy exploring Hollywood  before swapping the city for deserted islands and kava ceremonies in Fiji and finally jump back to a city metropolis as you explore the skyscrapers of Hong Kong. 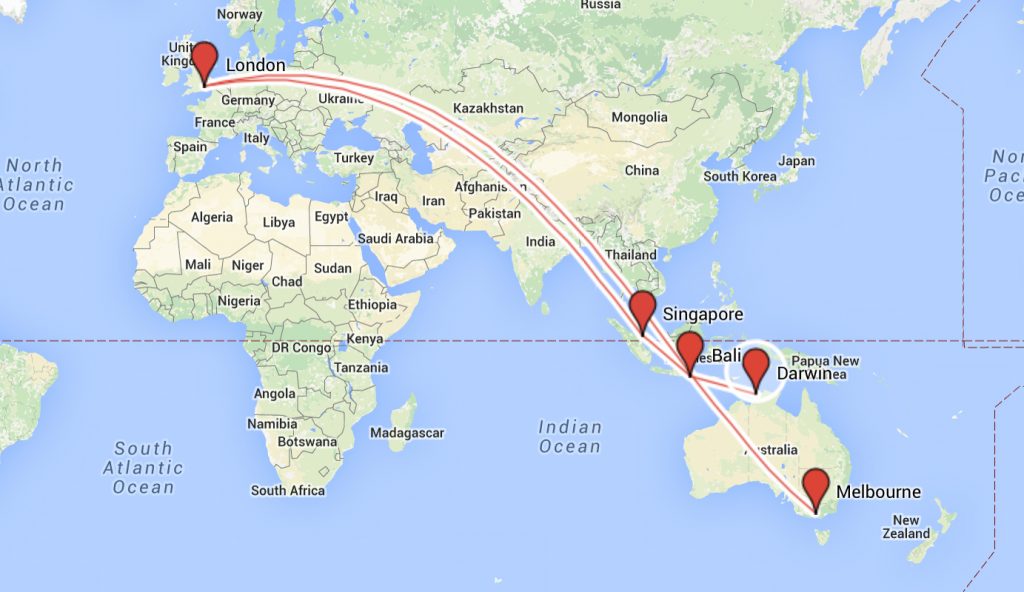 After a quick stop in Malaysia hit the surf in Bali and explore the Gilli Islands then hop over to the capital of the Northern Territory in Australia.

Cage dive with crocs and explore the many national parks before cutting through the amazing red centre and Uluru before finishing at the Melbourne Cup. Alternatively you could head over to Cairns and make your way down the East Coast of Australia ticking off bucket list items like the Whitsundays, Fraser Island and the Great Barrier Reef. 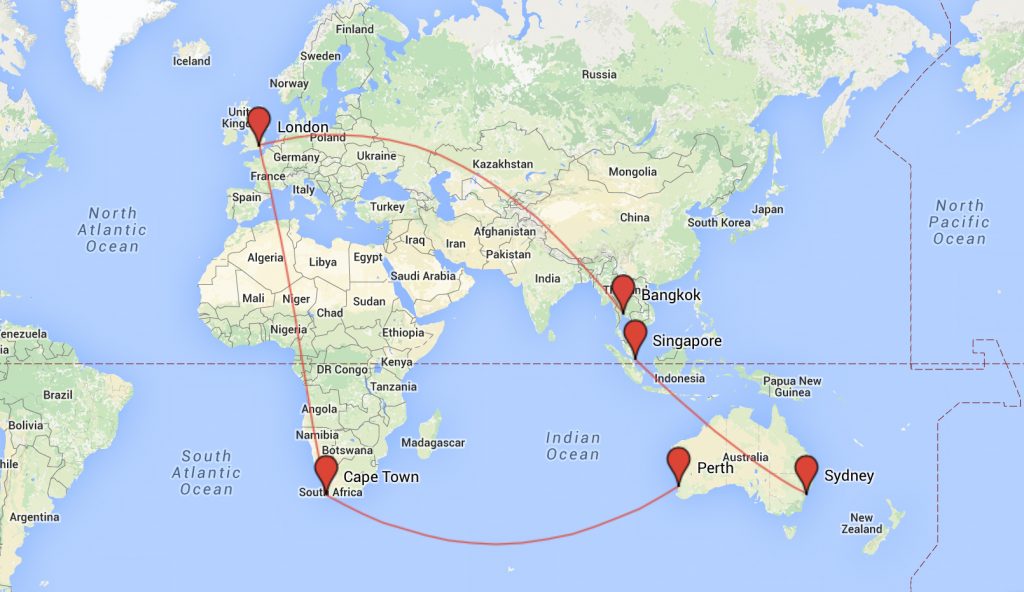 Kick back and enjoy Cape Town before exploring the Garden Route and immersing yourself on the hunt to spot the big 5 on a South African Safari or embarking on an epic surf adventure along the South African coast before flying into the capital of Western Australia. Loop north to Monkey Mia and Ningaloo reef then catch the train across the Great Australian Blight into Adelaide.

Cruise the Great Ocean Road towards Sydney. Finally enjoy a taste of Asia and sip a Singapore sling on the way before overlanding up through Malaysia and Thailand before heading home. 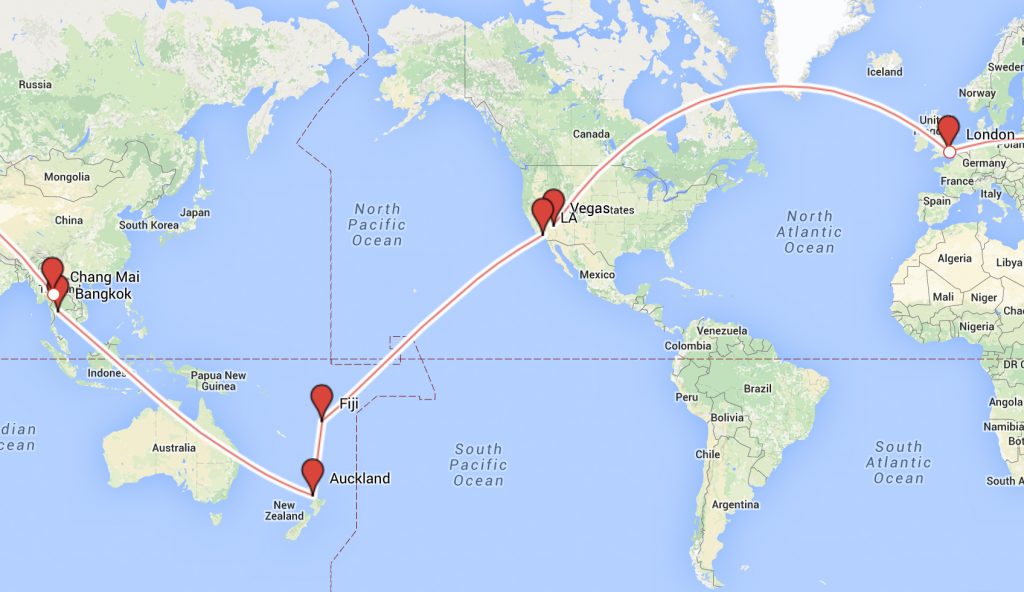 Gamble away the night in Vegas before roadtripping via the Grand Canyon to the coast of California. Then soak up the island lifestyle of Fiji before diving the beautiful north island of New Zealand.

Explore the markets and city life of Bangkok and head up north for your final stop with stops in Paid and relaxed chillaxed jungle life in Chang Mai in Thailand. 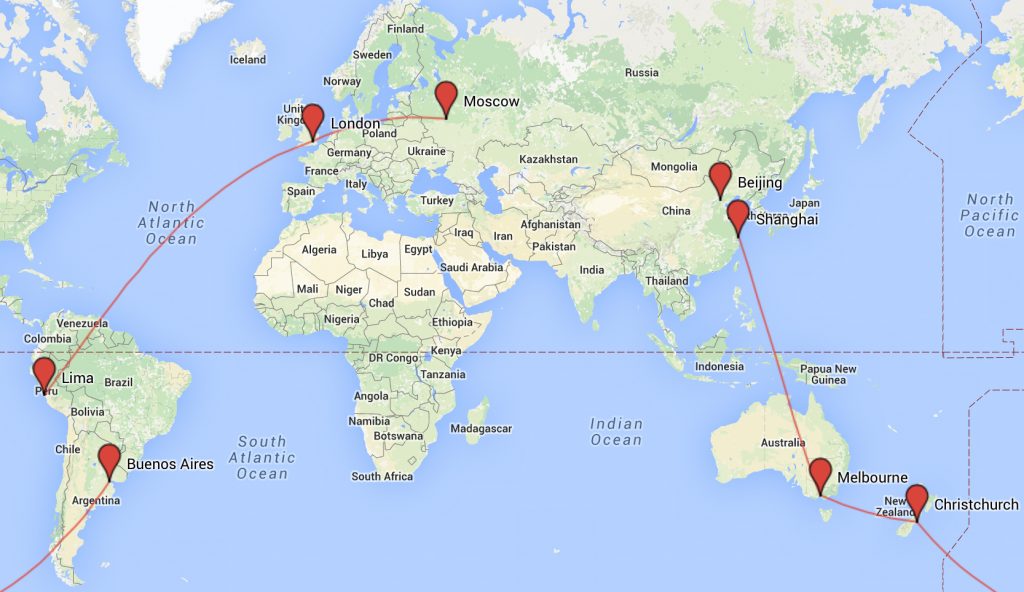 Land in the ex-eastern block of Moscow before embarking on the epic Trans Siberian Railway through Russia and via Mongolia to Beijing. Overland through China’s terracotta warriors and great wall to Shanghai before jetting off to the arty metropolis of Melbourne.

Then go Kiwi in New Zealand through ice glaciers and the adrenaline of the south islands before hitting up Buenos Aires – one of South America’s greatest cities. Then it’s overland via Chile and the Bolivian salt flats to the ancient inca trail and culture of Peru.

Gap Year Route 7 – The All Encompassing!

(My personal favourite and by far the most popular route!) 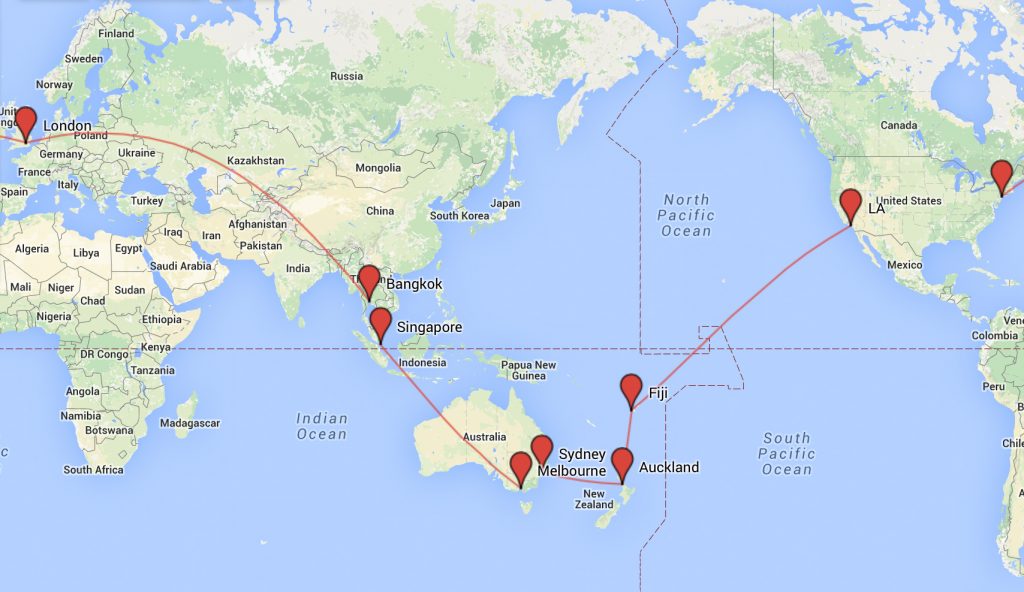 Start with the chaos of Koh San Road in Bangkok before keeping the party going at the Full Moon Party on Koh Phangan. Jump to the other coast for kayaking in the Phi Phi islands before hopping the border to Malaysia and the towers of of Kuala Lumpar.

Alternatively you could start by heading North into Chiang Mai over the border into Laos, down through Vietnam and into Cambodia before heading back into Thailand and going South.

Enjoy the glitz of Singapore before east coast carnage in Australia – inc. Whitsundays, Fraser Island and Cairns. Then it’s the Maori culture of New Zealand where you can loop both the North and South Islands starting in Auckland, before taking some downtime island hopping in Fiji.

After some serious island time soak up some California dreaming before roadtripping across the country to the city that never sleeps: New York.

Are you getting your around the world flight tickets locked in soon?