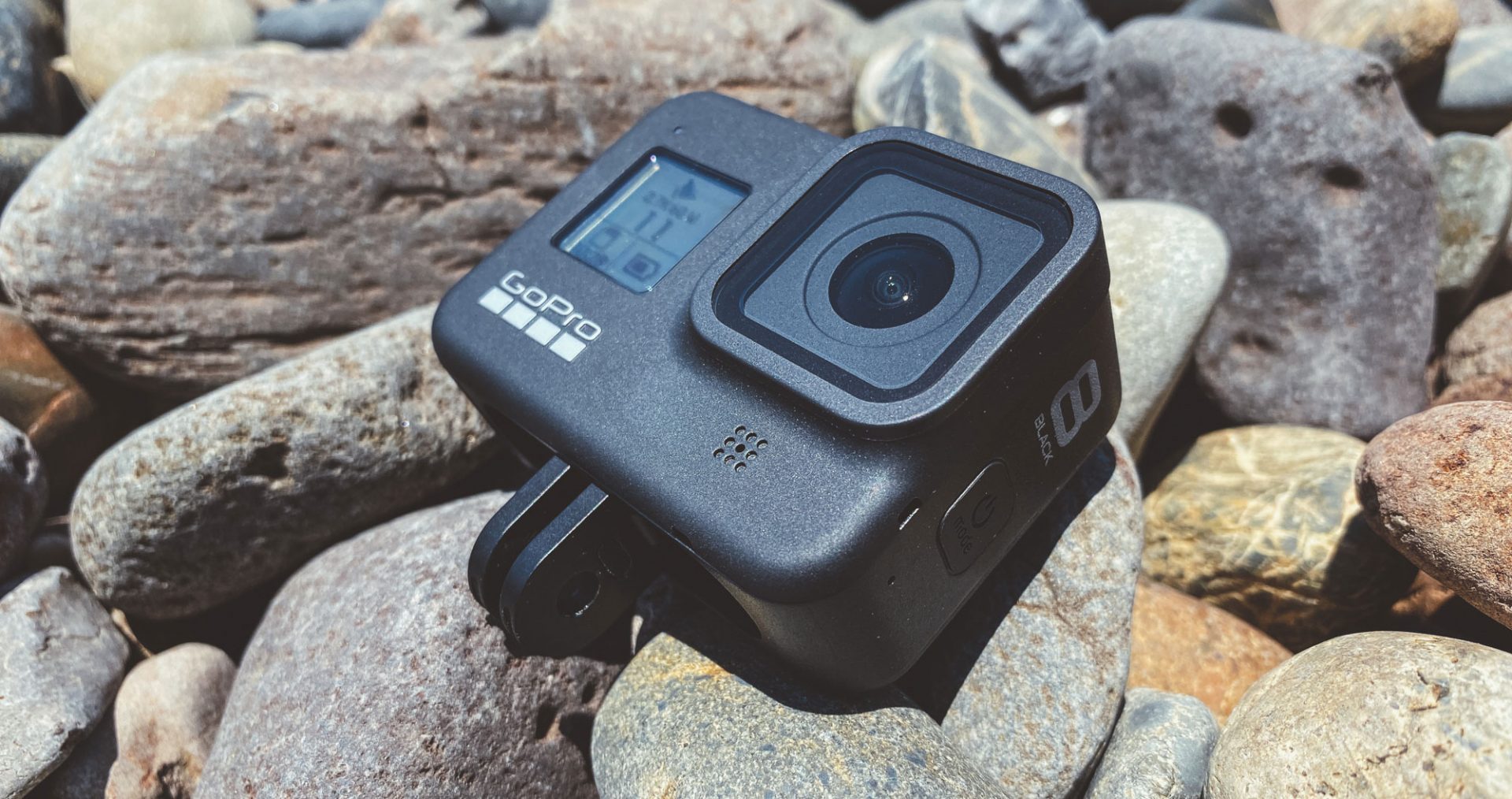 And just like that – BOOM the GoPro Hero 8 is here!If you’ve been following the blog for a while you know I’m a pretty big fan of GoPro and have been using them on my travels for years, in fact I even owned the very first 35mm film version!

So after putting it through its paces on the road here’s my full GoPro Hero 8 review – including what’s new, an overview of the best features and of course whether I think it’s worth upgrading too…

Hypersmooth 2.0 – Is It Really That Much Better?

The introduction of Hypersmooth in the GoPro Hero 7 was an absolute game changer, so I was rather dubious with the 2.0 release being touted as a big feature of the Hero 8.

But after testing it out I can say that it really is a big improvement and they’ve ironed out a lot of small niggles.

The biggest part of Hypersmooth 2.0 though is the fact it now works on ALL resolutions at ALL frame rates – which is a BIG deal.

As well as shooting smooth footage on standard settings you now have the option to use it on high frame rates like 2.7K @ 240FPS for super slow mo options in editing – for serious videographers this is a much welcomed upgrade and will take your footage to the next level.

One of my favourite Hero 7 features was Timewarp – which allowed you to create hyperlapses in camera. Not only does Timewarp 2.0 introduce an auto mode (so that the camera can detect the settings you’ll need) but it also now adds the option of pausing the ramped up speed and going back into real time footage for a bit, before re-engaging the Timewarp.

It may sound like a small thing, but it opens up some really creative options – so get out there and experiment!

Burst mode was always a bit hit and miss for me on the previous GoPro models – especially when shooting things you didn’t have a second go at.

Liveburst mode takes the guess work out of it and creates a high frame rate video – so when you load it up on the GoPro App you have 90 individual frames to choose from all formatted as 8 or 12 megapixel images.

Which makes it even easier to nail that perfect shot!

The audio on GoPros has always been a slight source of frustration so I’m stoked to say that the audio improvements on the Hero 8 are pretty solid, especially when it comes to that annoying wind noise!

They’ve also added in a new front facing mic which makes the sound on talk to camera pieces waaaaaay better, which is is a big relief!

One of my biggest gripes with GoPro has always been the user interface the camera had. Once again the Hero 7 addressed a lot of issues but the new software on the Hero 8 certainly makes life heaps easier.

As well as the preset video and photo modes, there is always the option to add your own customised presets, which is great for people who use a specific batch of setting regularly – think studio setups or for different sports shooting.

They’ve also taken it a step further and added what can best be described as widget areas on the screen which allow you to quickly access and change settings – all of which are customisable.

For example if you constantly switch between lens crops you can add that straight onto the video home screen so a single tap will switch between them. Or what about slow mo mode which maxes out the FPS for your chosen resolution?

Basically there are lots of little tweaks throughout the camera which make it easier to use, switch between modes and ultimately get a bit more creative freedom with your shooting.

Yes Your Mounts  Still Work (Well Most Of Them)

For the most part you’ll be stoked to discover that your existing GoPro mounts will still work with the Hero 8 – which is great news!

The exceptions to this are any that required the cage mount and also the Supersuit/dive housing – which you’ll need to get a new one due to the slightly changed design of the Hero 8.

Click here for the best GoPro mounts for travel

The Hero 8 launch seemed pretty targeted at the vlogger market too – and who can blame them, it’s a big market and everyones looking for that one camera that ticks all the boxes. Given the size and ruggedness of the GoPro it’s a good move on their part.

And the biggest draw on this is the new Mod add ons, which promise to turn your GoPro into a “video powerhouse” by bringing some upgrades and features to the table that maybe the average user doesn’t need.

The first of these is the mic mod (which is the base mount) and apparently bumps the audio up even more. This will be a welcome addition for any blogger as in the past GoPro audio has never been the greatest.

And even though the new audio upgrades and front facing mic of the Hero 8 help this, a dedicated mic is always going to produce better results.

With competitor DJI releasing the Osmo Action with a forward facing selfie screen GoPros reply is the Screen Mod – adding a flip up (yup no inbuilt like the Action) screen to the GoPro. For vloggers this will be much welcomed, butler most people it’s not a killer feature.

The final addition is the LED Mod, which helps with lighting and low light conditions. Again for the most part this isn’t a killer feature, but it does give people more into video more shooting options.

All of the above are combinable too, with the Mic Mod being the main mount for the LED and screen.

BUT – these don’t come in cheap – with the mic and screen mods setting you back $134USD and the LED $89USD – bringing your total GoPro investment to nearly $1000!

…and on top of that these mods aren’t even available for pre order until December 2019, which is a bit of a fail on GoPros part if you ask me.

Along with the whole “should I upgrade from my existing GoPro” question (which I’ll get to in a bit) is the burning question of whether the GoPro Hero 8 is worth it over the new DJI Osmo Action which launched a few months ago.

And this is where things get a bit tense.

The Osmo Action is actually a really solid competitor with the GoPro Hero 8.

One of the biggest advantages is that it has the forward facing screen (included in the cost, not an extra accessory) and in my opinion still has a better user interface too. Along with that access to more manual controls and the DJI Mimo app (the Actions partner app for your phone) being super user friendly make it a difficult choice.

Hypersmooth 2.0 does slightly beat out the Actions Rock Steady (which is heavily cropped), but both have mostly, the same resolutions and frame rates – with the Hero 8s 240FPS @ 2.7K being the biggest difference.

However the biggest clash comes down to cold hard cash.

The Osmo Action is a good chunk cheaper at $ and is on sale at the moment too at $ – which is considerably cheaper than the Hero 8 and even the Hero 7.

Simply put, the Osmo Action does offer the everyday user much better value for money, without sacrificing too many features – and its whether you feel the added features of the Hero 8 warrant the extra cash, or whether you’d rather spend the money on accessories…or save it of course!

Click here for more info and to buy Osmo Action

So what will this new piece of tech set you back?

It’s also worth noting that with the launch of the GoPro Hero 8, the Hero 7 got a price reduction too;

So lets get down to the main question you’re probably asking yourself – is it worth upgrading to the GoPro Hero 8 from your existing GoPro?

To be honest most GoPro options are a huge upgrade from the session now!

Hypersmooth alone is worth the upgrade, so the lower price point Hero 7 is also an option here too

Again Hypersmooth on it’s own is worth it, so either the Hero 7 or Hero 8

This is a tough one! If you’re happy with the Hero 7 I’d say sit tight and wait for the Hero 9 or even see what the Osmo Action 2 brings to the table. If Hypersmooth 2.0 across all settings is a must or you are seriously into video production then yes the Hero 8 is the best GoPro available right now.

Would I Recommend the GoPro Hero 8?

So would I recommend the GoPro Hero 8?

Well all cards on the table I admit in some ways it has fallen slightly short of what I was expecting – especially given the rumours of some vastly improved frame rates.

The Media Mods are great for the vloggers out there, but they do also vastly increase the price so I’m still slightly on the fence about them.

That being said though it’s certainly still a step forward for the existing GoPro range and is certainly the best action camera on the market at the moment in terms of features and performance.

I’m glad the Osmo Action is on the market though as I’m sure the added competition will see some bigger leaps in upgrades over the coming years!

The bottom line is yes I would recommend the GoPro Hero 8 if you want the best of the best when it comes to action cameras – but there’s certainly a lot more to take into consideration now if you consider the price of the Osmo Action and also the reduced price of the existing Hero 7.

Keen to see what video from the GoPro Hero 8 looks like and how it handles life on the road? Well I took mine along for the ride on my recent trip to the Solomon Islands to capture all the adventure!

With the exception of some drone shots and surf clips this entire edit is shot using the GoPro Hero 8 – mainly 2.7K @ 60FPS using Hypersmooth 2.0

Are you looking at the GoPro Hero 8?

What are your thoughts on the latest GoPro? 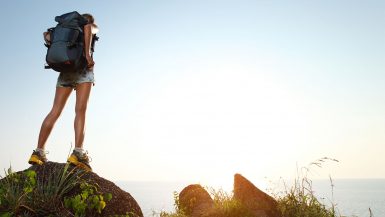 The Best Travel Backpack For Women – Tried & Tested By Women