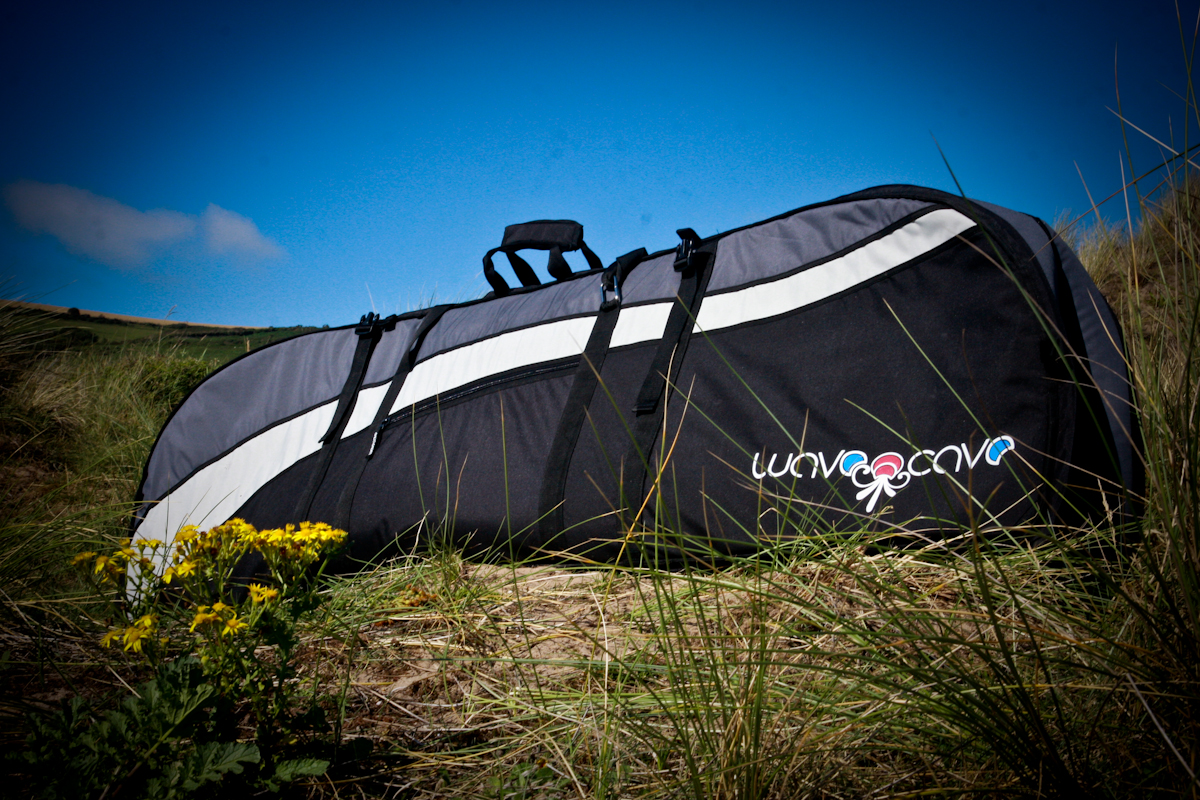 A few weeks ago my little bro Facebooked me a link – a little gem amongst all the other crap people share on these social networking sites. No ‘make money quick’ link, not even a viral YouTube video – this was a surf travel link, a preview for a soon to be released product.

Intrigued I clicked away and found myself on the homepage of the “Wave Cave” – the name really struck a chord so I delved around the site and quickly pinged an email off to their team via the contact page.

A mere few days later I found myself unwrapping the test model (the actual shipment still hasn’t reached British shores!) and headed to the coast for a spot of surfing and to test it out.

The concept of the Wave Cave is simplistic brilliance – a surfboard bag which also doubles up as a tent. It’s a wonder that someone didn’t get it onto the market sooner!

So I headed to North Devon to test it out…

Now in typically unprepared fashion I hadn’t even thought about asking Jez from Wave Cave for some instructions or even looking at the site for some clues – this could make for an interesting shoot!

Alas constructing the Wave Cave was as simple as the concept itself – within a minute or so it was up and pegged in – no faffing, no weird origami style trickey, a couple of zips and it was done!

The basis of this construction is by folding out the board bag flat, then in a pocket on the side is an arch – this opens up into the roof and the base is simply zipped around the circumference of the bag.

Now I’m sure half you reading this are rather dubious about some crazy tent bag thing and whether you’d be sacrificing the safety of your prized boards for a place to crash on the cheap.

I’m happy to report that I’m genuinely surprised with how well the whole thing is made (and just to clear things up here I’ve received no kick back or freebies for this review!).

As a board bag it’s solid. It’s made from durable yet light weight materials and all the straps/buckles/stitching is of really high quality. You can tell these guys are surfers making a product for other surfers rather than some big corporate company jumping on the surfing band wagon.

As a tent the fibreglass poles are solid yet light and the weatherproof canvas looks like it will take some serious abuse! In fact there’s very little (if anything) that I can criticise about how it’s made – the team don’t appear to have cut any corners. Good job guys!


When it’s launched in August the Wave Cave will come in a variety of colours and also sizes;

For those of you how travel with a quiver there’s the option of the 6’8 Triple, which can accomodate the following;

If you need even more room/size there’s also the 7’8 Triple;

For the rest of us there’s the standard 6’8 Double which can take 2 shortboards.

Cost wise the Double comes in at £180 with the Triples at £200/£220. In my opinion that’s pretty competitive with alot of travel bag setups out there.

They say that it will sleep two (obviously with plenty of leg room depending on your board bag size!) but I think the better option is the fact you could happily sleep one with your boards safely tucked up next to you!

For all you nomadic surfers who head to Indo for the winter or down to the Moroccan coast, or even to our very own shores for a surf trip who don’t have the luxury of bottomless pockets or a converted surf wagon the Wave Cave is an excellent product.

Basically it lightens your load and means wherever you take your board you also take your accomodation, perfect for those sporadic trips.

The only major thing I’d like to see added to Wave Cave would be a double skin so that it can truly work as a proper tent – but I’m sure this will quickly and easily be incorporated.

So whether you need a place to crash while surfing or simply want somewhere to store your stuff on a day trip to the beach – or even somewhere for the missus to nap and chill out when your in the water – the Wave Cave is a brilliant solution.

They’re taking order now so head on over to the Wave Cave website or even better head over to my good friends at Drift Surf and win one!