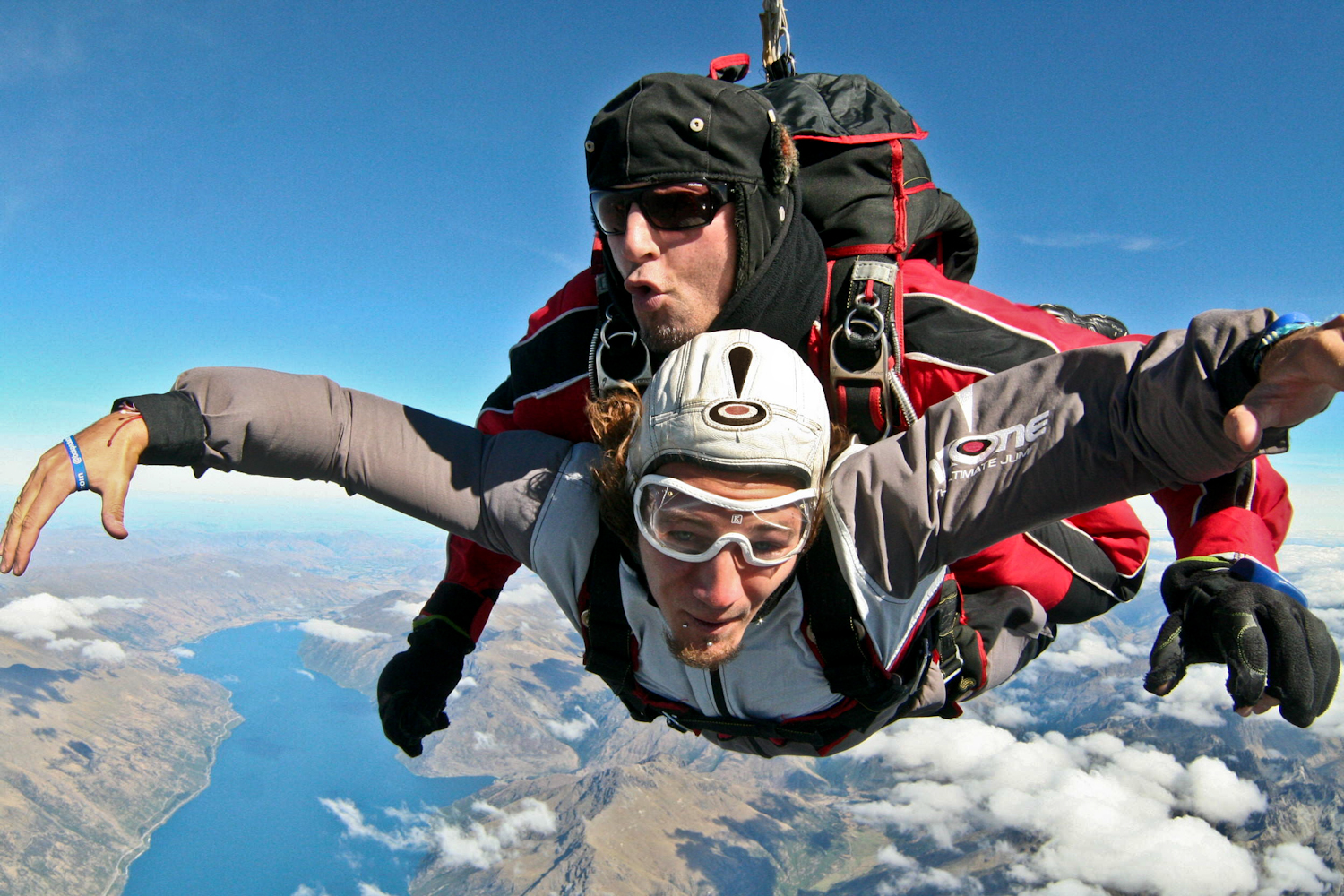 REVIEW; Skydiving With @NzoneSkydive…and My Dad!

If you’re like me then backpacking is a great opportunity to try a whole heap of new things and be a little bit crazy. In fact it provides the perfect excuse – and indeed opportunity – to get  out of your comfort zone and get some real adrenaline going.

So when I arrived in Queenstown, New Zealand – dubbed the adrenaline capital of NZ – I was primed for things to get loose!

But this wasn’t any old skydive. This was a skydive with my Dad…yup your read that right, through some divine miracle (or maybe a few too many beers) I actually convinced my Dad to join me and jump out of a plane too!

I’ve never witnessed him do anything even remotely near to that crazy (he works as a paramedic so is always warning me of dangers and what can happen – something I constantly ignore but he rejoices in “telling me so” when it all goes tits up) so I was pretty sure it wasn’t going to happen.

But even in the sober light of the following morning he was game, slapped down his credit card and paid to jump from 15,000 feet!

Out of all the skydive providers in Queenstown we opted to go with NZone. To be honest their sleek and professional website sold them straight up (I never trust a company with a bad website or bad design!) and the value for money on their packages was by far the best option.

After joining our fellow jumpers in the shop we were taken through the whole process – from form filling out (yes apparently skydiving IS dangerous…shock horror!) through to how we were getting to the jump zone and what would happen pre, during and post skydive.

As we all nervously boarded the mini bus to the airfield there was alot of tension in the air as people quietly contemplated what they’d got themselves in for!

Rather disappointingly though my Dad seemed pretty calm and collected – is it slightly wrong that I was hoping he’d have the sweats and been sinking into his seat with fear?!

After being shown around the drop zone we were introduced to our tandem divers – the people who we had entrusted our lives with and who we’d be strapped too as we hurtled at nearly 200kmph towards the ground!

Luckily they’re a sound bunch of people (well who wouldn’t be if the clouds were your office furniture?!) and they kitted us up and talked us through the jump procedure. Apparently the trick is to relax (easier said than done!) and bend yourself into a banana like shape with your arms out.

These all seem like pretty simple instructions, but they were going straight in one ear and out the other…my brain was much too preoccupied with the thought of falling to my death!

All suited and booted and with our camera guys in tow (I seriously envy their jobs – it looks heaps fun!) we were all sandwhiched into our plane, sat on the floor and with little to no legroom…kind of like what Ryan Air will probably turn into…only our skydiving plane had way better service and I wasn’t charged thousands for my excess baggage!

The flight to 15,000 feet was actually incredibly beautiful, we basically had a scenic flight thrown in for free – even so I did begin to notice the nervous banter of my Dad…which made me feel a little bit more amused about the whole situation.

As the pilot announced we were nearer jump altitude silence took over the aircraft except for the divemasters high fiving and wishing everyone luck – I’m not sure how much confidence that filled me with but it sure broke the tension.

Then the green light went on – which meant one thing…jump time!

As the first jumper fell into the abyss with a quickly muted scream bodies began shuffling towards the door and disappearing.

Finally it was just me and dad left. When asked who wanted to go first I quickly grabbed to oppotunity to annouce the fact I reallt wanted to watch my old man fall out of a plane – and before he could contest dad was dangling out of the aircraft with a cameraman in his face before hurtling towards the earth.

The chuckle I was having was cut quickly short though as I dawned on me that I was now in his position – with only air between me and solid ground and some guy I barely knew strapped to my back and in charge of my life.

I’m also terrified of heights which never helps in a situation like that!

Luckily for me he kept it short and sweet and before I could really register it all we’d backflipped out of the plane and were in free fall.

The sensation of plummeting towards New Zealand at 200kmph is something you can’t really describe…I guess the closest I can get is the phrase “F*CK YEAH” – which is pretty much all that was running through my mind at the time!

After gathering my senses a little bit more and pumped on adrenaline I took in the views and soaked up every second of it all – he wind pressed against my face and my arms flailing.

As I looked towards the ground a hazy white object was quickly coming towards me and I suddenly realised I was falling through a cloud! A bloody cloud! How freaking cool is that?!

I looked over at the camera dude and he was waving, and then suddenly felt a tug – our shoot had been deployed and BAM our descent rapidly slowed down, leaving the camera guy a mere dot between us and dry land.

As the canopy opened we began the journey towards the landing zone with high fives all round – we even caught up with dad and shouted congrats hovering high amongst the Queenstown skyline within about 50 foot of each other.

Then with the skilled experience over nearly 15,000 jumps I was safely back on the earth. Heart racing and stoked as!

And after some big hugs, high fives and congrats from everyone we’d survived…15,000foot and happy days all round!

…and you can see the whole thing in this video!

Personally I’d have no issues recommending NZone to any backpackers looking to tick skydiving off their bucket list – all their staff were professional, chatty and just as stoked about our jumps as we were!

When it comes to the photo and DVD packages they have by far the best deal of anyone I’ve skydived with. There photo package comes in a sleek looking presentation case which includes a CD of high res images, your skydive certificate, a series of prints and even a set of your pics on postcards to send home – now that’s going the extra mile!

And of course if you opt for the full DVD option it will also include a DVD of your jump footage.

If you’re not travelling with your laptop that’s no worries either as you can access all your pics and videos online to share via Facebook and what not too!