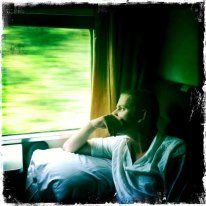 How I Overlanded Through South East Asia (Inc Costs)

I spent a large majority of 2012 bouncing around the tropical backpacking paradise of South East Asia.

Apart from a brief 3 week trip to Thailand the year before that I had very little insight into how I could get around the continent or how much it would cost me. In fact I landed with the view of only staying a month or so – but it quickly spiralled into nearly 6 month once I realised how easy and cheap it was to travel that part of the world.

So to help you guys out a bit here’s an overview of the transport I used and the journeys I took to help you plan your own adventure!

The sleeper train to Chang Mai was one of my favourite long haul overland journeys. It take over 12 hours (despite meaning to take less!) but you fall asleep in the bustling night of Bangkok and wake up in the depths of the jungle! Make sure you pay the extra for the bottom bunk if you can and the a/c carriage is highly recommended! Cost me about £10.

To get from northern Thailand into Laos I booked a combo ticket which took you to the border via a/c mini bus, then the slow boat to Luang Prabang. The whole thing took just short of 2 days but it felt alot quicker as its packed full of backpacker laden with cheap booze! There’s a night stopover in a slightly dodgy town en route but you can pre book that accom if you want. Before leaving Thailand there’s also a stopover at the White Temple which is always worth a picture or two. Cost around £25 (+visa fee at the border)

I mini bused it through most of Laos as it was the easiest and cheapest option. book early for the best seats. Cost around £5 per journey

The overnight bunk bed sleeper bus to Don Det was one of the most amusing journeys I did overland. Make sure you’re travelling in a pair else you might end up bunking down next to a randomer – unless that’s your thing! It took just under 12 hours and only set me back about £20

Getting down to the Thai islands on both sides to and from Bangkok can be done on the 12 hour sleeper bus. It’s a pretty comfy journey and cost around £10. Just be aware of your valuables on these though as I know a few people who’ve had stuff stolen whilst they were kipping and my main bag was completely gone through whilst in the hold.

Ferries are the only way to island hop (unless you want to splash out on a private speedboat!) and are comfy, a/c and usually play movies. The ferry to  Koh Phi Phi is just under a couple hours and cost around £15 return. Don’t be fooled by 1000baht return from the mainland, simply buy the tickets in single legs – it wont cost you anymore. I used the Phi Phi Island Cruiser.

You can organise it from Phuket town with a mini bus drop off at the port too, just shop around for the best prices.

To get from the west island to the east I jumped on another combo ticket from Phi Phi. The mini bus was comfy and a/c. The overnight ferry is where things got a bit odd – you basically jump into a converted bunk room on the supply ferry! Still I slept fine and we arrived around 5am – just in time for the bars to open for breakfast. Again this ticket was just shy of £20

Much like the west island, jumping between the east ones will be via ferry. Tao – Phangan is the longest and most expensive coming in at just over £10. There’s a few operators you can use depending on the time you want to leave/arrive but I used the Lomprayah as it was the most comfy and had the times I needed.

Overlanding from Thailand to Cambodia isn’t actually that difficult as you can do it all on a single ticket. It does however take freaking ages, especially when it come to border controls. Still it was a bargain at around £20 – but if I was ever to do this again I’d probably shell out the £70 for an Air Asia flight between the two!

Another sleeper bus at around £10. 12 hours later after another bunk bus ride you’ll find yourself at the coast. Beware though there’s a direct and single change option. Unless you want to be swopping buses and making sure you still have your bag at 3am get the direct.

Just a short ferry journey to Koh Rong and only about £8 – but you’ll go from coastal town to island paradise so it’s well worth slotting it in. You can get the ticket from most travel agents although sometimes you can grab them at the pier also.

Probably one of the worst journeys as far as space went – our mini bus was completely rammed! Still it only set us back under a tenner, so you can’t complain too much!

Tuk tuks are a great way to bounce around pretty much anywhere in Asia, they go from the mellow countryside jaunts in Cambodia to the outright terrifying traffic weaving nut jobs of Bangkok! Bargain hard for a good price but try to avoid those with stop offs to suit shops etc

If you can’t be bothered with the haggle or want some a/c jump in a taxi instead. Meter ones are the best option for price and make sure you only get an official one – they should have badges and ID on the dash, don’t be afraid to take a pic of it or ask for ID too. Sometimes they can take longer than tuk tuk though as they can’t weave around.

During my jaunt in Asia I also took 2 flights, which I thought I’d chuck in here for good measure…

Entering Thailand by land only gets you 15 days of visa time, I opted to pay £100 for the Thai Airways short haul flight from Laos to the capital so I could get the full 30 days I needed.

I used Air Asia fro my 5 hour flight from Phuket to Bali and it set me back just under £150 inc baggage, a bargain price to pay for world class surf and a month exploring the gems of Indonesia.

As you can see overlanding through south east asia is pretty damn cheap – especially in comparison with flight costs. Of course if you have the extra dollar to spare or need to jump large distances that may be the best option, but if you have time on your side jump on some buses and night trains – some of my favourite travel buddies have been people I met on long haul journeys – sharing the pain and sweat together and then bouncing around a few countries together! It’s backpacking at its finest!