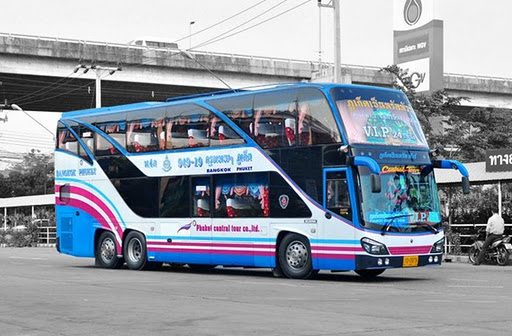 How I Narrowly Avoided A Night Bus Robbery In Thailand

There are certain situations you hope you never end up in as a backpacker.

Running out of money, getting hopelessly lost, missing a flight…

But theres one which tops the biscuit, but unfortunately is one of the most common hazards facing travellers – getting robbed.

Talk of the Trail

Over my world wanderings I’ve heard many tails of people getting robbed, some more concerning than others.

One of my passengers whilst working at STA Travel got robbed at knife point in Rio, people I’ve met in Asia have been pick pocketed, others have been scammed at local currency exchange places.

When you go on holiday you tend to let your guard down slightly though, you’re exploring the world, care free and enjoying life, so it’s easy to slip into bad habits and unknowingly put yourself in a vulnerable position.

I’ve been pretty lucky to avoid scenarios like the above (touch wood!), but through no fault of my own I did nearly get robbed a few weeks ago whilst in Thailand.

I travelled overland safely on my last trip there and had no reason to believe this time would be any different, but my overnight bus journey from Bangkok to Phuket nearly turned out to be my undoing.

I’ve heard a lot about scams on overnight buses in Asia – peoples hand luggage being robbed whilst they sleep, being pick pocketed by the person next to them, so I’m always on guard, my hand luggage by my feet and with the rain cover for extra deterrence.

What I hadn’t considered was my main luggage in the hold.

I always padlock my main bag – whether it’s for plane journeys or simply moving hostel – it’s easy enough to do and it’s always better to be safe than sorry, and this overnight bus was no exception.

But on collecting my rucksack in Phuket I was puzzled that the zip and lock were in a different location. I soon ignored it and didn’t think much of it…until I checked into my next hotel.

…as soon as I opened my bag I realised something was up.

Having lived out of a bag for the best part of 6 months at this point I had packing down to a fine art, everything had its place, fitted in neatly and I could locate everything pretty quickly.

But now the contents where a mess. Not just a moved slightly around in transit mess, a someone’s riffled through my stuff mess.

At first I started to panic – “what did I have in my bag“, “where are my debit cards“, “what have they taken“.

I felt completely exposed and vulnerable for the first time on my travels – it was an odd feeling and one I’m not keen to experience again.

Then it mixed with anger – how dare some pikey Thai guy try and steal from me. How dare he try to potentially ruin my trip that I’d worked and saved so hard for.

What a complete dickhead!

Whoever had picked the lock and gone through my bag had gone through EVERYTHING. Wattle bottles had their caps removed, my first aid kit had been opened, my toiletries bag routed through, even my travel towel had been unravelled.

The whole thing was a mash of unorganised clothes and travel stuff.

But the more I looked through my bag and regained my calm the more I realised that nothing was actually missing, nothing I could gauge of any importance anyway.

My brand new ENO Hammock was there, trainers, all my clothes, boardies, surf kit…it was all still there.

Then it dawned on me – they were looking for the easy steal; money, credit cards, passport, camera gear, laptops…

A smug grin started to appear across my face – all of my valuables had been in my hand luggage, on my person, on my lap, inside the bus and it had never left my sight!

It was quickly followed by a slightly arrogant chuckle too – whoever had gone through my bag had also been through the smaller bag I use to keep all my charger and electronic cables together.

Within that bag was a Canon 7D manual, GoPro charger and the distinctive white Apple laptop charger.

They must’ve been pissed knowing I had all that gear on me but had safely stowed it by my side!

Word to The Wise

I was lucky enough to get out of the whole thing with only the inconvenience of having to repackage and organise my bag – it could’ve been heaps worse.

I’ve since invested in a better padlock for my bag, but I’m still very wary about what I keep in my main rucksack, especially during the times I have to leave it unattended.

Many people I’ve met keep all sorts if valuables in their bags – and I have no doubt that some of the people on that bus ended up with things of importance being stolen from them.

I’ve also met backpackers who have experienced similar situations on night buses (especially to and from Bangkok) some of whose lost large sums of money in the process.

Don’t be put off overland travel by any means, I will use night buses in the future despite what happened; they’re a cheap, easy and convenient way to travel.

Instead learn from my experience. Always padlock your rucksack, and where possible keep your valuables where you can see them – especially when it comes to things like money, credit cards and your passport. And worse comes to worse find some solid annual holiday insurance – that way if anything does get taken you’re not out of pocket.

I could loose everything I own, but with those 3 items you can at least survive until everything is sorted.

It’s always better to be safe than sorry.