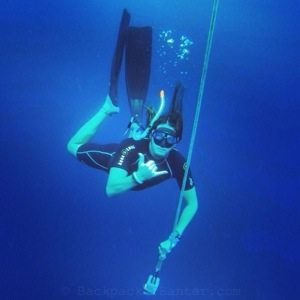 Up To 30m On A Single Breath?! SSI Level 2 Freedive On Gili T, Indonesia

If 6 months ago you’d told me I’d be able to hold my breath underwater for over 2.5 minutes and dive to over 20m I would have said you were crazy.

In fact I still think it’s crazy – the only thing that has changed is that it’s now a reality!

After discovering the world of free diving on Koh Tao earlier this year – where I completed my SSI Level 1 – free diving has become somewhat of an obsession of mine.

This newly booming sport isn’t about discovering the limits of the human body, it’s about opening up and realising your personal potential.

Always one to take up a challenge when I headed back to Gili T in Indonesia earlier this month I decided to take the next step and tackle my Level 2 free diver – and where better to get it done than under the watchful eye of UK champion free diver Michael Board, who recently smashed the UK free dive record when he descended to 102m on a single breath…yup 102 metres!

From the off my instructor – Chris from Freedive Gili – re enforced the fact that free diving is more a mental than a physical challenge. Chris walks around like he’s on a cloud, in fact most free divers do – they’re some of the most calm and collected people I’ve ever met…but then again you’ve got to be pretty relaxed to hold your breathe for up to 7 minutes like he can!

The Level 2 course builds strongly on the yogic practices of Level 1 – with a daily warm up designed to achieve 3 things; focus the mind, relax the body and warm up the lungs and diaphragm.

I love a good bit of yoga, but the stretches for the lungs were a whole new ball game – aimed to decrease you residual volume (basically the size your lungs can squish down to at depth) and increase your total lung capacity (how much breath you can take in), both of which allow you to dive deeper, longer and safer.

Watching these exercises in action was almost as impressive as the diving itself, free divers have a crazy amount of control over their diaphragm and it’s something I need to work on…ALOT!

Level 2 also re enforces the science behind freediving. At first you might think it’s a crazy, almost suicidal sport but in fact it’s backed by some solid – if somewhat astounding – science.

Take this for example – when you dive on a single breathe your lungs get compressed. At a certain depth they reach the limit of this, however the air in your lungs continues to compress further. Instead of your lungs collapsing though your body has a solution – it redirects blood to lungs and then uses plasma to compensate for the difference in pressures.

In short – our bodies are designed for freediving. We already have a natural response to help keep us safe at depth.

How crazy is that?!

Not only that but all water going mammals have something called the mammalian reflex – basically when our faces are submerged in water our airways automatically shut, our heart rate can reduce to nearly 50% and our body redirects blood from the extremities to the core organs. No thinking involved, it just happens!

So basically our bodies can automatically deal with holding our breathes to 20m no worries and Chris demonstrated this (which I must stress you SHOULDN’T TRY!) by fully exhaling and then going down to 20m.

As with any qualification there’s certain goals you need to pass your Level 2. The main ones are as follows;

Having already proven to myself that I could hit 20m that wasn’t what phased me as much – the pool swim and static breathe hold though were a different matter!

I’ve been practising breathing techniques for a couple months now but hadn’t made it much past 2 minutes 10 seconds.

However on day 2 with the warm up exercises, advanced breathing and relaxation techniques we gave it a go.

On the second attempt Chris told me when I hit 2 minutes 15 seconds and I began the countdown in my head. However it seems I was rather fast – stupidly surfacing at 2 minutes 24 seconds – DAMN IT!

My third attempt though was when I passed – I extended my breathe up, focused, relaxed and got stuck in. Despite having contractions (a convulsion in your diaphragm caused by the urge to breathe) from 1 minute 30 I sucked it up and made it to 2 minutes 34 – STOKED AS!

With that behind me I had a new found confidence – the 55m pool swim didn’t phase me as much after that and I successfully completed it no worries! Definitely a weight off my mind!

Despite now knowing I could hold my breathe and swim 55m the real challenge came in the ocean.

Now as a surfer I’m comfortable in the ocean, however I find it heaps difficult to relax. I have a very busy mind that can easily be distracted! So at depth, with the feeling of pressure, I found I totally lost focus, which would then cause me to tense up, which in the end would make me psych myself out and come up from around 20m.

It’s incredibly frustrating coming up and not being even slightly out of breathe – knowing your body is more than capable but it’s your mind that is the issue!

That’s one of the most addictive things about free diving for me though. It’s a new challenge – a mental challenge and discovery of myself, about accepting things around me that I cannot change, realising I easily have the potential and skills to go deeper and then emptying my mind so I can actually overcome the mental barriers I’ve put in place.

I simply have to man the f**k up and go for it!

Despite this though I completed the rescue scenario, the no mask ascent and sneaked past the 20m barrier…just!

“Relax and Melt Into The Water”

Then came what was arguably the most fun part of freediving and the skill that will eventually allow me to go to depths well past 40m – freefalling.

The science behind this is all to do with buoyancy. At 10m a properly weighted free diver become neutrally buoyant and beyond that they’re negatively buoyant – or able to sink without effort.

Free falling is therefore getting to the point of optimum negative buoyancy (between 15-20m)and then simply relaxing, stop kicking and – as Chris puts it – melt into the water, letting science do its thing and free falling into the blue.

This is the technique all free divers use – past 20m they literally do nothing, they just kick back, streamline themselves and enjoy the ride!

The experience of free fall is something I find hard to describe. At first it’s a bit un nerving, but after a few attempts you begin to relax and it allows you to fully switch off and appreciated the beauty of the ocean.

For me that’s what free diving is about – it’s a beautiful sport that allows you to appreciate a beautiful part of the world which many people never fully explore.

I want to be able to hit the 30m mark (the max allowed on level 2) but I definitely need to work on my relaxation techniques for a bit before attempting it!

Still – I completed everything needed to pass and I’m now stoked to say I’m a SSI Level 2 Freediver!

I can already tell free diving is going to feature a lot in my travels – a way to challenge myself and exploring the ocean in places where I can’t surf.

Have any of you tried freediving? Or have I convinced anyone to give it a go?!