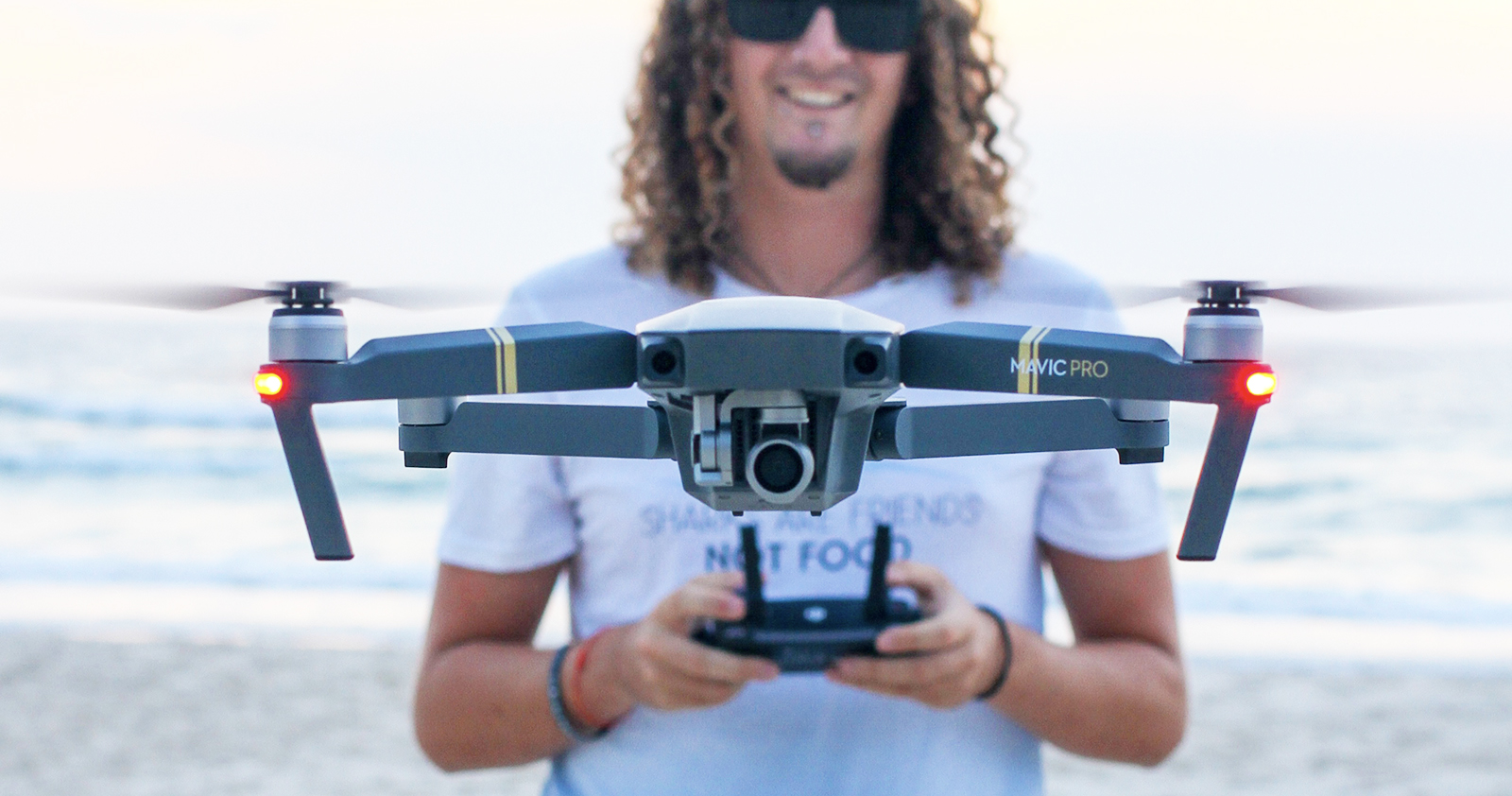 Looking for the perfect drone to travel with? Here’s my full DJI Mavic Pro Review and whether it’s the best drone for travel

Drones are the new must have travel accessory – especially for film makers and travel bloggers –  but when the need to balance size, portability and functionality is so important it was hard to figure out the best drone for travel.

But when DJI announced the Mavic Pro it seemed as though they’d created the perfect drone for travellers and I (like many other bloggers!) quickly sold my Phantom 3 and pre ordered!

The DJI Mavic Pro is so small and portable it’s insane!

Even reading all the online reviews, watching the videos and doing my research I was still caught off guard when I finally unboxed my Mavic Pro.

I spent the last year lugging around the Phantom 3 Advanced drone – the bag containing the controller, spare batteries and drone itself meant that was my entire hand luggage, which was  a huge annoyance when jumping on planes or overland travel!

The Mavic Pro on the other hand fits in the palm of my hand (it’s about the same size as a water bottle!) and even the controlled is super slimmed down!

Instead of a dedicated backpack the Mavic Pro now fits into any backpack alongside the rest of my hand luggage or day kit, which means life is a whole lot easier!

Sure you can chuck your drone into your existing camera bag or apparently in your purse (probably not the best idea!) but I grabbed a super slimline case for my Mavic Pro which keeps it safe in my day bag without taking up too much room. Perfect!

One of my biggest issues with my previous drone was the setup time. I had to take it out the case, manually put on the propellors, unfold the controller and link everything up, so I was slightly dubious about how the Mavic Pro fold up design would affect setting things up.

I shouldn’t have worried!

The ease of setup is ridiculous and I can have the drone booted, connected (I shoot with my iPhone 7 Plus) and ready to fly within a minute – quite literally!

Everything is simple, clean and easy.

And because of this I’ve found myself shooting much more footage, it’s just heaps more convenient.

From a  quick post surf shoot to some awesome footage along the Great Ocean Road, I’ve been filming more than ever with the Mavic!

And not only does the setup save time – but the battery life of the Mavic Pro is pretty epic too – up to 25 mins on a single battery. It might not sound much but that’s plenty of time to shoot some awesome footage…but you should still invest in some spare batteries too.

The DJI Mavic Pro boasts some impressive Intelligent Flight modes – designed to create incredible results without having to be a super experience drone pilot!

These pre programmed modes allow you to capture a variety of footage which will make your edits look heaps more professional and slick.

Follow Me – this does exactly what it says on the tin! Click on yourself on the screen and then the Mavic will automatically follow you and keep you the focus of the frame. Awesome for running shots, mountain biking etc

Point Of Interest – this is the one I use the most for shooting, which allows you to complete a circular flight path around a particular focus point.. Hover over what you want to focus on, set the height, then the distance from the subject and finally the speed you which to complete the loop. Hit go and start filming!

Great for some awesome cinematic style shots of islands!

Terrain Mode – this mode automatically keeps the Mavic at the same height off the ground wherever you fly it – perfect for epic hiking shots.

Waypoints – if you’re trying to complete a more complex flight path and want the filming to be super smooth this allow you to pre programme the route you want the Mavic to take and then it will complete it automatically. Ideal if you want to focus on shooting and filming or for a pre determined route.

Selfie – yup you can take an aerial selfie (or “dronie”) with your Mavic! Simply wave at the drone to get it to focus and then use your hands to frame your face, strike and pose and click…easy!

Even without these Intelligent flight modes Mavic Pro is super user friendly and easy to fly. I’ve handed over the controls to people with literally no drone experience and they’ve been able to get to grips with flying it with no worries.

One of the awesome additions to the Mavic Pro are the forward facing sensors and the drone will automatically stop if it flies to close to an object or person.

And yes I personally tested this flying at myself!

Some may argue that it lacks the additional sensors that the Phantom 4 now have, but I’d rather have something than nothing. Just keep in mind that if you’re panning backwards you won’t have this failsafe!

Another awesome feature of the Mavic Pro is the return to home button. Yup, hit the button and the drone will return to where you took it off from – with surprising accuracy.

Not only is this an awesome fail safe (if you run low on battery this also kicks in automatically) but it’ll also extend your flight times as this mode makes the most direct path and optimises speed to conserve battery.

DJI drones have been renowned as user friendly for a long time and the Mavic Pro is no exception to this.

…that being said I highly recommend practicing flying your drone in an empty, open space before tackling more challenging shoots!

The DJI Mavic Pro is far from being the cheapest piece of kit you’ll buy for your travels – but even so the Mavic Pro is well priced given it’s huge advantages when it comes to those shooting on the go.

It’s a big investment – but if you’re looking to take your travel photos and video to the next level it’s an amazing piece of kit to have with you!

And if you are going to grab one use the affiliate links above – it won’t cost you any more and helps support the blog!

“the Mavic Pro is well priced given it’s huge advantages when it comes to those shooting on the go.”

So Is The DJI Mavic The Best Drone For Travel?

Okay I’ll be honest the Mavic Pro does lack some of the higher specs of say the Phantom 4.

But when it comes to bouncing around the world the DJI Mavic is easily the best drone for travel.

The sacrifice in some specs in favour of portability are balanced well and lets be honest most people consume video content on their phones and mobile devices – so unless you’re wanting to produce a full blown movie of specifically need the higher quality the Mavic Pro will produce the footage no worries.

Before the Mavic Pro my drone shooting was limited – I needed time to setup, I had to organise what Iw as taking with me and basically went to locations with drone shooting as the focus.

The portability, ease of setup an overall convenience that this brings means I’m now shooting more drone footage than ever before, because it’s a tool I can carry everywhere with me.

And as the saying goes – the best camera is the one you have on you!

UPDATE: I’ve now also tested and reviewed the Mavic Air – which is my new go to drone for travel!

“the DJI Mavic is easily the best drone for travel”

Have you taken a drone on your adventures?

What’s your personal opinion on the best drone for travel?