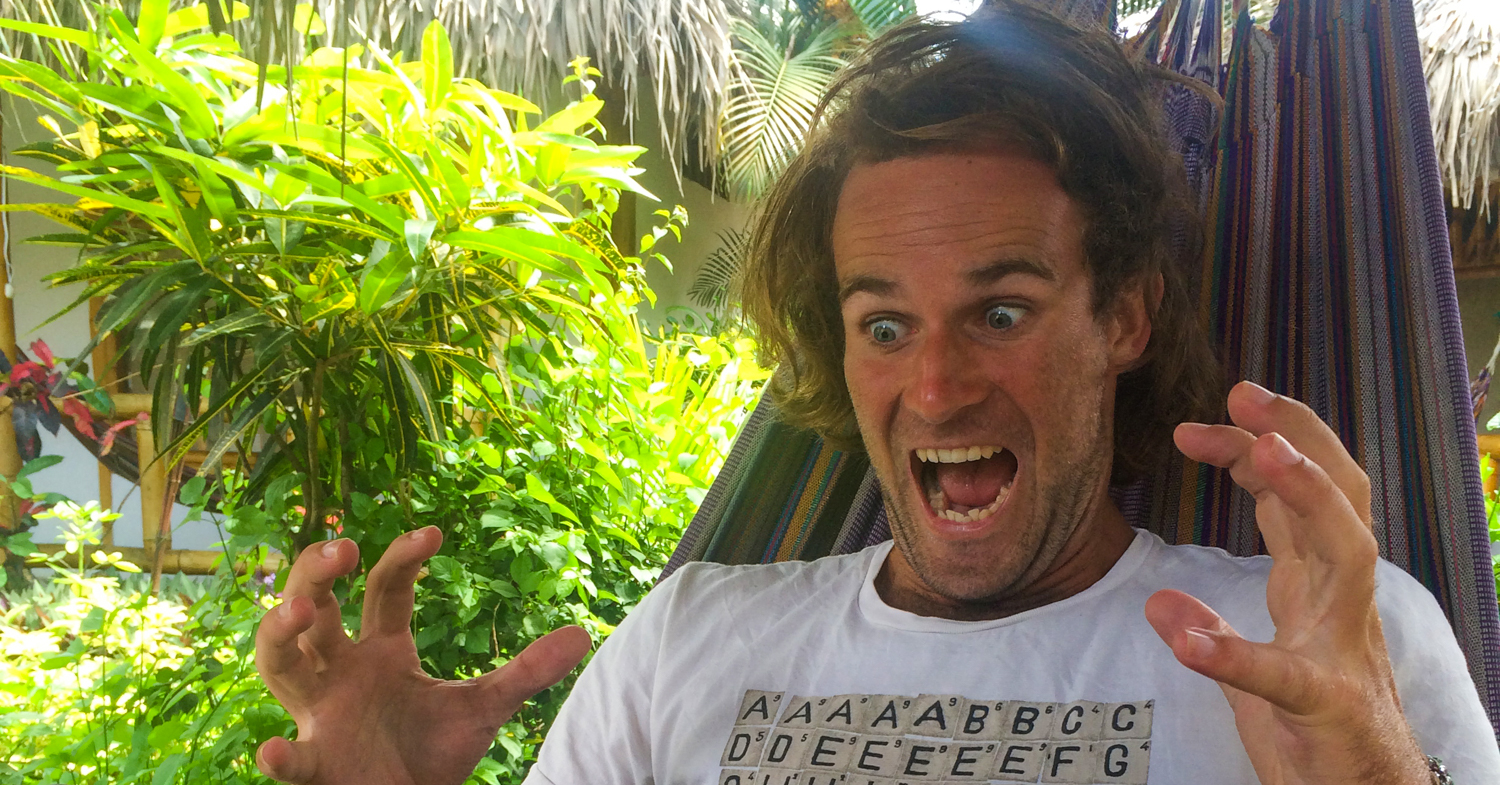 Heading out on your first backpacking adventure can be daunting – but here are some of the most common travel mistakes you’ll make – and how to avoid them!

Gearing yourself up to go travelling for the first time can be daunting. Whether you’re backpacking for a year or just for a few months that first adventure is a whirlwind of emotions and planning.

And yes you are going to mess up a few things – it’s only natural!

I can give you a heads up on a few common mistakes I’ve seen heaps of first time travellers make so you can hopefully avoid them and streamline the stress out of travelling…and yes I’m guilty of making a lot of them myself!

Taking Too Much Stuff

Even now I have this problem! Figuring out what to take and what to leave behind is a nightmare – but what if XXXX happens, how about XXXX?!

It’s stressful simplifying your life into a single backpack!

The old saying goes “lay all out your stuff out on the bed and halve it” ….and it works!

The worse thing though is if you’re heading through a variety of climates – sure it might be swelteringly hot in Asia but New Zealand will have snow by the time we get there.

The best advice on this I can offer is remember you can always buy new stuff on the road and offload some old stuff.

Those Chang beer t-shirts and hippy pants you’ve spent the last 5 months sweating into can be ditched and you can buy a nice waterproof coat to fill the gap!

I’m still guilty of trying to over pack now, it’s a hard habit to break. You’ve got to be ruthless! Trust me you might pack 10 t-shirts but you’ll probably only wear 5.

If you REALLY have to pack heaps of stuff I’m sure you’ll soon get tired of lugging it around and you can always lighten the load by donating clothes to charity shops en-route.

The other half of the saying after halving your clothes is to double your money!

My best advice on this is to budget around £1,000 a month – as it tends to even out across countries.

The worst thing you can do is leave quickly and suddenly realise you don’t have enough dollar behind you – worrying about money will wreck your trip.

So even if it means delaying your planned departure date it’ll be worth it in the end!

Along with the budgeting research make sure you have a rough idea of how much things like taxis, hostels and food should cost you.

That way you hit the ground running and wont end up paying £40 for an airport taxi when you could’ve bartered to £20 or even got the shared shuttle for £10!

The same goes for hostels too, do you really want to book that £80 hotel when there’s an epic hostel with heaps going on for £8?!

Ok so I’ve told you to do some planning to avoid some mistakes and save some money – but on the flip side you can over plan!

Dont land somewhere and have the next 3 months of your travels planned out day by day, where’s the fun in that!

Make sure you have a rough idea of where you’re heading but enough flexibility to embrace opportunity. Who knows you might bump into an incredible girl in Byron Bay and find yourself on a flight to San Francisco a couple of weeks later?! ;)

If you haven’t over planned the extreme you might fall into is to land in a place with NO plans. That’s just as disastrous, especially if you’re only just starting out on your travels!

I always have a few things in mind for each place – whether is some restaurants, places to stay or a couple of day trips.

Suddenly landing in a new place with no idea on where to stay or what to do is the worst way to start any adventure!

It’s also important to make sure you know what the deal is with visas too. Some airlines wont let you on without onward flights (I’ve experienced this first hand with Bali and Singapore!) but also make sure you know if you can get a visa on arrival or places if you’ll need something like the ESTA visa for the USA and have to apply before travelling.

Along with this comes the length of stay (usually in days, which includes the day of arrival!) and many countries such as Thailand will impose hefty fines if you overstay and in some cases you can even get banned from re entering for a certain period of time!

This is a personal pet peeve of mine! I’ve met people who have travelled to 40 countries…sounds good hey?

But then you learn they did that in like 2 months and all I can think is “well you cant have really travelled them much if you’ve blasted through them that quickly“!

This isn’t a race guys, nor is it about collecting passport stamps! The whole point of travel is to embrace the country, the culture, the food, the experiences.

3 days in a country doesn’t count, so get over yourself!

My advice is always that it’s better to spend more time exploring less places than rushing simply for the sake of saying you’ve been there.

“the whole point of travel is to embrace the country, the culture, the food, the experiences”

Maps can be pretty deceiving sometimes and I’ve met a lot of people who have massively underestimated the distances between places – both actually distance but also travel time.

Australia is a prime example.

The amount of times I’ve heard “I’ll spend 2 days on the Whitsundays and then start my dive course in Cairns the next day” or something similar is insane.

That’s like 2 days of travel time if you bus it!

Before you set plans into stone do some research, ask some people. A mistake here can really mess up your trip and feel you left totally drained and stressed out.

Waiting Too Late For Jabs

When it comes to travelling it’s always good to keep some boring stuff in mind too, especially insurance and vaccines. It might not be the most exciting stuff to deal with but it’ll certainly make life easier.

Some places you might not need anything, some you’ll need a heap of needles to be stuck in you – it all depends on location and your personal medical history.

The main thing to keep in mind here is that some vaccines – like rabies – need a course of jabs across a few weeks.

So basically the earlier you get started, the less stressful it’ll be. Don’t leave it to the last minute!

The same goes for getting any travel medication you need. Make sure you’re you know if you need to get malaria tablets for any part of your trip and do research into any other issues your itinerary might involve like Zika virus or dengue fever, that you might need to plan stuff for.

It’s boring – but being on top of these important things will certainly make your travel much safer and ultimately more enjoyable!

Worrying About The Small Stuff

Worrying about travelling is totally normal – it’s part of the fear and excitement that well all love about travel so much.

The unknown is daunting but don’t let it get to you too much else you’ll be stressing out before you even get on the plane!

This is especially true about solo travel – I get heaps of emails about “will I meet people”, “is it safe”, “what if blah blah blah happens”.

Check out some of my posts like “The Truth About Being A Solo Backpacker”, “How To Meet People When Travelling Solo“, “10 Myths Of Backpacker Travel” or Erins “10 Common Fears About Solo Female Travel”, hopefully they’ll help put your mind to rest about some of the worries you’re having!

Not Finding Out For Yourself

When you’re on the road for the first time you’ll be chatting to heaps of new people, hearing about where they’ve been, where they’re going and of course sharing where you want to go to as well.

But in every hostel travel conversation there’s always one person who thinks they know everything and are now a walking talking Lonely Planet.

They’re usually this self righteous people who are trying to find themselves or after a culturally immersive experience, or try to avoid the tourists.

Think the dude with dreads of the second Inbetweener movie!

“there’s always one person who thinks they know everything”

In short they’re stuck up their own ass and will judge every part of your itinerary, look down at their nose at your newbie backpacker status and scoff when you say you want to head to the Full Moon Party on Koh Phangan.

The worst thing you can do is take everyones advice on face value. If you want to go party the night away on a beach, go do it. If you want to follow the normal East Coast trail down Australia go nuts.

At the end of the day this is your adventure, your money and your life – so if you want to do something don’t let anyone else’s judgement stop you!

I’ve been back to Indonesia numerous times and I simply find myself surfing for the most part rather than exploring. Sure I could have found some incredible experiences and hidden gems whilst I was out there.

But do you know what? I love surfing and if I want to spend a month based in Kuta taking day trips to surf breaks that’s exactly what I’m going to do.

My life. My rules!

Now I’m not saying don’t listen, just take everything with a pinch of salt.

Everyone has their own style, agenda, passions – so by all means take their opinion into account, but don’t let others dictate your trip or make you feel bad about your plans.

“at the end of the day this is your adventure, your money and your life”

The bottom line with all of these common mistakes is be prepared!

Do your research, chat to people and give yourself plenty of time to get everything in order.

…but the most important thing you need to remember to do is to enjoy every part of it – the fun and adventure starts at the planning stage!

Any hints and tips you’ve picked up for first time backpackers? Share the love in the comments!